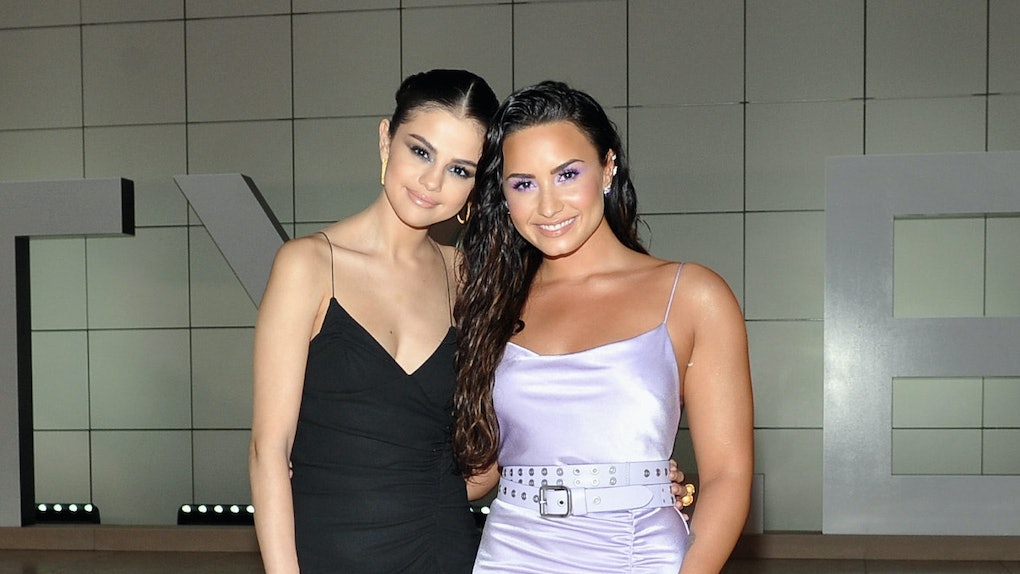 Growing up in Hollywood is a lot like navigating through school. Take Selena Gomez and Demi Lovato's friendship, for example. They are longtime friends, having known each other since appearing on Barney & Friends back in 2002; they also both went on to star in their own Disney Channel shows. It's like they were elementary school besties who ended up attending the same high school, which happened to be filled with other huge tween sensations. Both Gomez and Lovato eventually "graduated" to complete stardom – while making friends (and frenemies) along the way. The shady cliques, intertwined relationships, and messy drama resulted in a pretty complicated friendship. These six people Gomez and Lovato have in common really put their Hollywood experience into perspective.

Swift became friends with Gomez and Lovato around the same time in 2008. They were often snapped at events together. Though, it seems Gomez's budding friendship with Swift may have been a factor in the falling-out between Gomez and Lovato at that time.

In 2010, a video surfaced of Lovato greeting fans in London. When one fan asked Lovato, "How's Selena?" she answered, "Ask Taylor." Judging by Lovato's tone, she may have been throwing shade at Gomez and Swift (at least fans certainly thought so).

See for yourself at the 1:35-mark below.

That marked the beginning of Lovato and Swift's contentious relationship over the next nine years. Though, it was arguably one-sided, mostly comprised of Lovato subtweeting Swift and even following her recent exes on social media.

Lovato extended an olive branch to Swift in September 2019, when she posted an Instagram story congratulating Swift on her new album Lover.

In contrast, Gomez and Swift never feuded. Their bond seemed to get tighter and tighter with each year. In May 2015, Gomez appeared alongside Swift in her "Bad Blood" music video, making her mark as a member of Swift's now-defunct squad. In September 2018, Gomez said Swift is "like [her] big sister" during an Instagram Live.

During the late 2000s, Gomez, Lovato, and Cyrus were Disney Channel's leading ladies on Wizards of Waverly Place, Sonny With A Chance, and Hannah Montana, respectively. From 2007 to 2008, Gomez guest-starred on a few episodes of Hannah Montana as Mikayla Skeech.

However, in 2008, rumors swirled that Gomez and Lovato were feuding with Cyrus. Gomez started dating Nick Jonas at the time, who had previously dated Cyrus from 2006 to 2007.

In 2008, Cyrus and her then-BFF Mandy Jiroux made a YouTube video mocking one of Gomez and Lovato's vlogs, which many fans found to be mean-spirited at the time.

Cyrus later apologized in a July 2008 interview with Popstar!, saying, "We were just, like, having fun... Elvis says, 'Imitation is the greatest form of flattery,' so we were imitating them being funny."

The trio's relationship saw a fair share of ups and downs over the years. At any given moment, one member of the trio had unfollowed or re-followed someone else, spurring more feud-based headlines.

But in a February 2016 interview with W, Gomez said she never had beef with Cyrus. "We never feuded. We both liked the same guy when we were 16 ... We are now completely settled in our own lives," she said.

Cyrus echoed a similar sentiment in 2019 while discussing the lyrics of her song "Cattitude." Fans thought Cyrus was shading Gomez after she captioned a May 25 Instagram post, "I love you Selena, but I listen to Demi." This caption was similar to "Cattitude" lyrics, which seemingly pinned Nicki Minaj against Cardi B ("I love you Nicki, but I listen to Cardi").

Cyrus cleared up rumors she was taking a dig at any of the artists mentioned in an interview with Capital FM radio, saying, "I think that you’re allowed to enjoy two artists who fill a similar lane," followed by, "I just always grew up collaborating with Selena [Gomez] and Demi [Lovato], and there was never competition."

At the time of publication, Gomez and Cyrus don't follow each other on Instagram, but Lovato and Cyrus do. Social media isn't always a direct reflection of real life, though.

Having exes who are friends of former friends can make for seriously sticky situations. Gomez dated Bieber off and on from 2008 to 2018. Now, Lovato and Bieber are both managed by Scooter Braun — y'know, the guy who is also the arch-nemesis of Swift (Gomez's BFF) after buying the rights to her music catalog. Bieber and Lovato sided with Braun while Gomez was relatively quiet about the whole ordeal, even if it did involve two friends and an ex.

Since moving on from Bieber in March 2018, Gomez took some time to reflect on her past relationships, pouring the lessons she learned into her latest single "Lose You To Love Me." She sings of love, loss, and tremendous growth on the Oct. 23-released track.

Lovato and Bieber, on the other hand, seem to be cool. Bieber sent well-wishes to Lovato after she overdosed in July 2018. "It’s very sad. I haven’t talked to her, but my prayers go out to her and her family,” he told The Blast.

Nick, Joe, and Kevin Jonas were also Disney Channel stars back in the day, appearing alongside Lovato in Camp Rock and Camp Rock 2 (Lovato even dated Joe briefly in 2010). As for Gomez, her Jonas connection comes from dating Nick in 2008.

While the Jonas Brothers are all married now, Gomez said she's never harbored any ill-feelings toward her ex and his brothers. When speaking to KISS FM UK in December 2017, she said, "They're lovely, by the way. We're all friends now. We were young, you know; it's a different time."

Lovato and Nick remained BFFs long after their days on the Disney Channel ended. They co-headlined The Future Now tour together in 2016 and even did an episode of Carpool Karaoke together.

In July 2018, Nick posted an emotional tweet after Lovato's overdose.

Lovato and Jonas no longer follow each other and she did not attend his 2018 wedding to Priyanka Chopra, but that doesn't necessarily mean there's anything wrong in their friendship.

Gomez and Lovato may not be BFFs with everyone on this list anymore, but just like high school, in the end, everyone matured, moved on, and the drama doesn't seem as pivotal anymore.

More like this
Meghan Markle & Prince Harry's Beef With The British Tabloids, Explained
By Brandy Robidoux
Kendall Jenner Shaded Selena Gomez On Twitter & Selenators Went OFF
By Michele Mendez
Camila Mendes’ Friendship With Lili Reinhart & Madelaine Petsch Got Stronger After Their Breakups
By Lydia Wang
Stay up to date