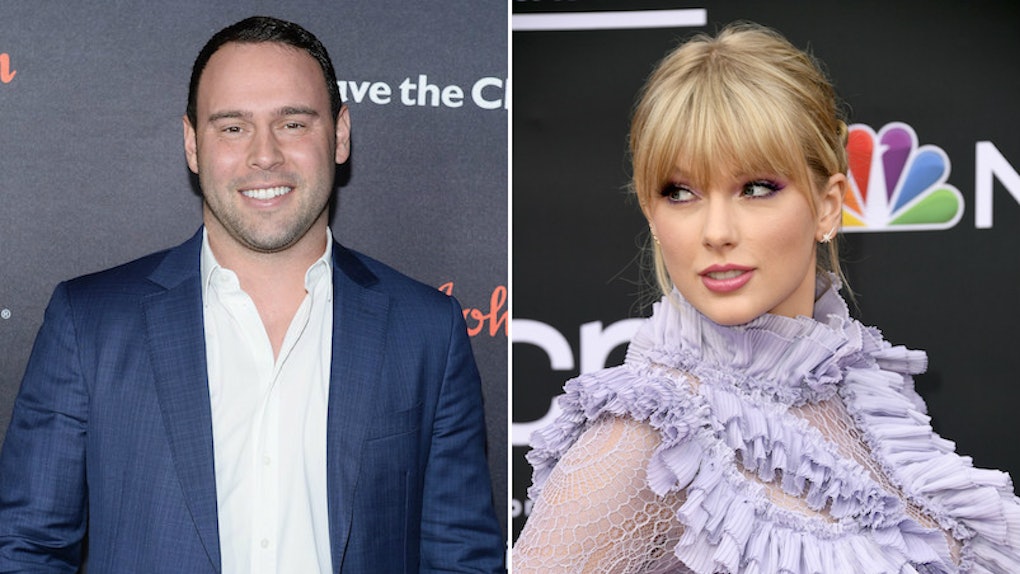 By now, you've probably heard that Taylor Swift's "worst nightmare" has come true. Her old label Big Machine Label Group, along with her entire music catalog, was purchased by talent manager Scooter Braun, whom Swift claims has bullied her in the past. In fact, she wrote about it in a long letter on her Tumblr. Music fans have been keeping an eye out for Braun's response, but so far, it has yet to come. Frankly, Scooter Braun's reported reaction to Taylor Swift's open letter is probably for the best, as it sounds like he is trying to keep his correspondence with Swift private. Elite Daily reached out to Braun's team for comment on the report about how he is handling Swift's post but did not hear back by the time of publication.

In Swift's letter, she explained, "I learned about Scooter Braun’s purchase of my masters as it was announced to the world. All I could think about was the incessant, manipulative bullying I’ve received at his hands for years." Swift also addressed Big Machine's CEO, Scott Borchetta, writing, "When I left my masters in Scott’s hands, I made peace with the fact that eventually he would sell them. Never in my worst nightmares did I imagine the buyer would be Scooter."

Her post also included this screenshot of Braun and West (yup — that'd be "Imma let you finish" West, the one and only) laughing while FaceTiming with Justin Bieber, who captioned the picture: "Taylor Swift what up."

For his part, Borchetta penned his own response on Big Machine's website in a letter called "So, It's Time For Some Truth..." where he claimed that he and Swift previously negotiated a contract that was looked at "in detail" by her legal team that ensured "100% of all Taylor Swift assets were to be transferred to her immediately" upon renewing her contract with Big Machine. He backed this up by providing images of said contract. Additionally, Borchetta explained Braun always seemed to have Swift's best interest at heart, writing, "Scooter was never anything but positive about Taylor... Scooter has always been and will continue to be a supporter and honest custodian for Taylor and her music."

Lastly, Borchetta says he texted Swift the night prior to the acquisition going public, so he feels it is unlikely she "woke up to the news" like she claimed she did.

Well, first of all, Justin Bieber spoke out in his defense regarding Swift's bullying accusations, clarifying that Braun had nothing to do with the Instagram post Swift referenced in her post and that it was simply a screenshot from an unrelated conversation that Bieber used in the moment. He claims Braun told him not to post things like that in the future.

As for Braun's restraint from responding publicly to Swift, according to sources who spoke with Just Jared, he is trying to speak with her directly. Apparently, he is making an effort to contain the fall-out and does not want to go on the record nor stoke the media flames regarding this conflict. The insider explained,

Scooter won’t be releasing a statement. He won’t fuel the fire by engaging the online banter. His hopes are to talk to Taylor directly and he isn’t interested in anything else.

Braun's wife did take it upon herself to voice some thoughts on Instagram, but the public and fans have yet to hear from him directly. Swifties are standing by to hear/see/read what happens next.