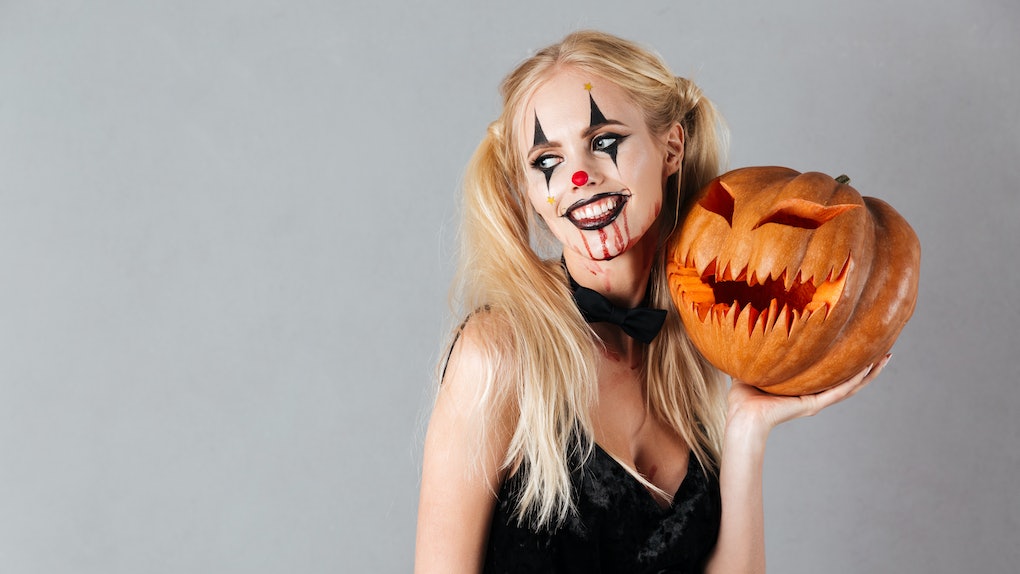 When October hits, I’m all about everything that’s creepy. I’ll start filling in my social calendar with haunted house tours, mazes, and the like. I make sure to block off ABC’s 13 Nights of Halloween and live my life accordingly. But as dedicated as I am to the scary nature that is the All Hallows; Eve experience, I can appreciate the funny millennial Halloween costume ideas my generation comes up with every year. There is such a thing as dark comedy after all, right?

And, I can admit it, I'm not funny. Anyone who knows me will tell you half the time I get my loved ones laughing, it's at me, not with me, or otherwise completely by accident. Comedy is art, and I'm not just referring to telling a joke with a decent punchline or making slipping on a banana peel look like a genuine mishap. Authentically funny personas don't just throw around a spontaneous riddle every now and again; they embody the character, and isn't that what Halloween is all about?

You don't have to be a natural comic to don a funny Halloween costume and score some laughs. If you want to change it up from horror to hysterical this year, look to the internet for inspiration to dig up what pop culture moments and social media posts got people giggling in 2017. Here are a few to get you started.

1. Winona Ryder At The SAG Awards

Winona Ryder's many disheveled faces at this year's SAG awards granted her a one-way ticket to internet meme stardom whether she wanted it or not.

I've been a fan of the actress ever since she played Josephine March in the 1994 film adaptation of Louisa May Alcott's Little Women, but this stream of psychotic facial expressions was giving me all the Beetle Juice vibes, which is obviously perfect for Halloween.

Slip into your favorite LBD, wand your hair in messy curls, and commit to only attributing crazy eyes and side-mouth to every conversation around you.

Anyone that has been in a relationship can relate to being slightly obsessed with their SO, so it shouldn't be too hard to get into character for this hysterical Halloween costume. Plus, all you have to wear is a t-shirt and jeans, so enjoy being comfy AF while you make everyone around you hilariously uncomfortable.

No boyfriend? No problem! It's Halloween, and you're playing a part, so creep on everyone else's SO while you can. Just be aware of any overly obsessed girlfriends IRL, because they may come after you if you get too close.

No worries, friend. With Fat Amy on your side, no one's going to be putting you down for cardio this Halloween.

You can really pick any scene from Pitch Perfect and find an epic Fat Amy costume to emulate, but you can't deny that her anti-physical activity face is all of us when we're not in the mood to move.

Get your jazzercise style on and show up dressed to impress at the gym. Amy sports a pair of black leggings, layered pink and white t-shirts, and an epic sweatband that matches her top and footwear.

The entire Sarcastic Wonka series has made my experience browsing the internet so much more enjoyable than I could have ever imagined.

The candy man himself is a classic costume all its own, but start cracking sarcastic remarks in the middle of a conversation, and you'll be racking up epic IRL meme moments all night long.

Your costume should be as lavish and flamboyant as humanly possible, with a blinding pop-of-purple blazer and a contrasting paisley vest, with a giant bowtie and brown top hat to complete the look. Nail down that irritating smirk and those wow-this-is-hardly-fascinating wide eyes, and you're golden.

Maybe I love this costume because I'm still a child on the inside, or perhaps it's because of the fact that I have an 8-year-old niece who steals my phone on the reg just to send spammy text messages overflowing with characters. Whatever the reason, the poop emoji makes me giggle every damn time someone incorporates it in our conversation, and the internet clearly understands my obsession.

It's one thing to dress in all brown everything, pile your hair in a messy top knot, and claim your poopy throne, but naturally, social media has found a way to take it up a notch with this braided emoji 'do that looks mighty sh*tty, in the best way possible.

6. It's Raining Cats And Dogs

This clever costume from Twitter user @Kirstinseitzz literally had me snort-laughing.

You can finally put your Beanie Baby collection to good use by attaching all your favorite stuffed friends on top of an open umbrella. As another option for lazy dress-up, all you'll need to complete the ensemble is a rain jacket and pair of rubber boots.

More like this
What Is Boo Bash At Disney World? The Halloween Event Has Rides, Music, & Themed Treats
By Cianna Garrison
40 Hashtags For Mother's Day Pictures For The Ultimate Momager
By Tessa Harvey
24 Texts To Send Your Mom On Mother's Day That Are Perfect If You're Long-Distance
By Rachel Chapman
Stay up to date