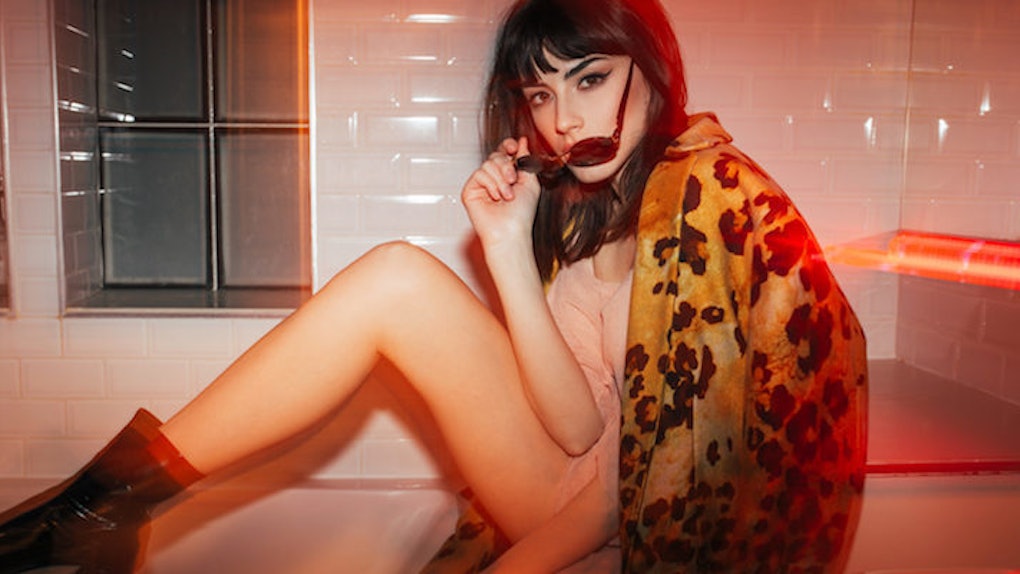 I Was The Girlfriend Who Was Obsessed With My Partner's Ex

I'm that crazy girlfriend: the one who is wildly obsessed, fixated even, on your ex.

I'm the low-key stalker your parents humbly warned you about when you were a pimply teen first entering the world of dating and heartbreak.

I'm the Facebook boundary breaker, the private investigator clad in a too-tight leather skirt, who will slyly break down the entire trajectory of your past relationship, drawing dramatic, irrational conclusions while sipping a glass of champagne.

In my 30 years of attempting to survive this cruel planet, I've done certain things I'm really, truly proud of.

For example, I got approved for a credit card. It only has a $600 limit, but hey, it's a start. And I also scored a modeling gig in a Tampon print ad in the early 2000s (I made $5,000 bucks to enthusiastically straddle a guys shoulders while pretending to be on the rag).

But those glittery little triumphs aside, I've also done some really embarrassing shit in my lifetime.

I've worn white on my period and left irremovable stains on my mother's $750 Theory dress.

I once took a Xanax instead of an Advil and completely screwed up the biggest audition of my life because I was sedated the entire time.

I'm that crazy girlfriend: the one who is wildly obsessed, fixated even, on your ex.

I've left the door to my car unlocked on a sketchy street in Burbank with a brand new, coveted, cream-colored Balenciaga motorcycle bag inside of it, right in plain sight.

Not only was that gorgeous, buttery, leather heaven bag stolen, but also my windows were smashed and my passport was taken.

But nothing is quite as embarrassing as the horrific sins I've committed all in the name of lust and love.

In my day-to-day life, I'm not a mental head case. That's the worst part.

My bizarre relationship behavior is drastically out of character in my normal life.

I mean, I'm British. I have stellar manners. I grew up in Connecticut. I wore white gloves to cotillion and waltzed in a floor-length dress with the grace of a swan (yes, I was stoned the whole time, but that doesn't negate my impressive fox-trotting skills, it only affirms them).

But if you were to only know this one terrible side of me — this dark side that gets pulled out when I fall in love (or lust) — you would think I was a reckless savage raised by a bubble-gum-smacking, mentholated-cigarette-smoking older sister.

It all started with this girl I dated. We'll call her Celia*.

It was the era in which my crossover to the ~dark side~ of obsession spiraled out of control.

It all started with Instagram. Instagram is the seemingly innocent gateway drug to a full-blast stalking addiction. I recommend you stay the hell away if you want to preserve your sanity (and your relationship).

At the time, I was new to the Instagram game. And I was excited to look through my new girlfriend's pictures. I was new in town, fresh off the boat from England, excited to get some insight into bae's past life.

So one night, I'm sitting pretty at the bar by myself. I pull out my trusty iPhone, and I start to recklessly scroll through Celia's pictures.

"Ooh, she looks sooo cute in her flannel, what a cute little baby dyke!" I drunkenly say aloud, wondering what the hell #TBT stands for.

"Aww, look how gorgeous my girlfriend is!" I shout to the bartender, shoving my cellphone in his greasy, irritated face.

"She looks nothing like her parents. I wonder if she's adopted?" I whisper into my glass of wine, hoping the bartender doesn't cut me off because I'm starting to become self-aware that I'm acting like a lunatic.

"Oh, that's cute. WAIT." My voice falters. The lights dim. The music fades. The walls close in around me. The credits come up.

There it is: A clear-as-day picture of Celia with her arms wrapped around a compact, muscular brunette.

She's short and compact, like an acrobat. Long, wet-looking curls cascade down her tanned shoulders. I can smell her hair gel through the cracked screen of my phone.

She's got warm, blue-green eyes, a round face and is wearing a tank top. She's everything I'm not.

And Celia looks so happy with tank top girl. And it's not that I hate this random girl who she clearly dated right before me, I'm fascinated by her. I'm intrigued.

I'm suddenly fueled with relentless desire to know every single detail about her.

I want to know where she went to school, what her family dynamic is like, if she was traumatized as a child and if she wears a toe ring (she seems like she would wear a toe ring).

I conclude that she surfs because she's so tan. Is she interested in politics? Is she a lesbian? Or is she bisexual? She's radiating bisexual, unpolitical energy.

I'm suddenly fueled with relentless desire to know every single detail about her.

And the next thing I know, I've fallen down the dark rabbit hole. I'm on her Instagram, and SCORE. It's a public account.

I learn she has two dogs, both of which are rescues. My dog, a King Charles Cavalier Spaniel with bug eyes and a short tail, is not a rescue. I bought her, which makes this ex a much better person than me.

I'm irrationally infuriated to discover she rides horses because I RIDE horses, and there is only room for one horse rider in a woman's life. And then I'm on her Facebook.

And for the entirety of our relationship, I stalk the hell out of this woman. Girl, trust me. I've done some things I'm not proud of.

I found out where she worked and gazed at her through the window, massive black Chanel sunglasses resting on against the bridge of my delicate nose as I wondered how she was so good at balancing drinks on a tray.

And for the entirety of our relationship, I stalk the hell out of this woman.

Through the vicious resource of Facebook, I found out what lesbian events she was attending and pressured my girlfriend to go just so I could run into her and observe her.

It's not like I wanted to talk to her, I just wanted to watch her. It's as if she was an exotic giraffe in a zoo.

She wasn't even particularly exotic or interesting, but I was sick with curiosity. To this day, Celia has no clue that I spent our six-month courtship stalking the hell out of her ex. Dreaming about her ex, even.

My next relationship was with an older woman whom I wasn't particularly attracted to, so for whatever reason, her ex didn't really concern me. But I still found myself stalking Celia, who was now my ex-girlfriend's ex-girlfriend.

She wasn't even particularly exotic or interesting, but I was sick with curiosity.

Finally, I spoke to my best friend Owen about it.

"I'm crazy! Why the hell do I give a shit about this girl? Celia and I aren't together, and I can't stop obsessing over her. I'm imagining them having sex, making out, wondering where they exchanged 'I love yous' for the first time and wondering who said it first, what they fought about and where their favorite restaurants are."

I spilled it all to my dear friend over one of our famous confessional train rides to the Fire Island Pines.

"Ugh, I do the same thing, Z!" He pulled out his iPhone and presented me with screenshots he had taken of his ex-boyfriend's ex-boyfriend.

I pulled the boxed wine out of my bag and guzzled it like I was going to the electric chair. My thoughts raced faster than the suburban Long Island trees flew in a blur past our speeding train.

And I realized exactly what the obsession was: When you love someone (like, really love someone), you feel like you're falling in love for the first time. Even if you've been in love before.

Kisses will feel brand new. When you have sex with them, you're being deflowered all over again.

Isn't that what love is? Being so alive, so fresh in the glorious moment with this gorgeous human, you forget you've ever felt this way before? Isn't that why it's so intoxicating? Because it's the refreshing feeling of newness.

So the idea that not only did your partner have a life before you, but also a girlfriend, is mind-blowing.

It's like getting punched in the sore spot. It feels like the brutal arms of reality shaking you by your frail shoulders, boldly reminding you that YOU'RE NOT THE ONLY ONE THEY'VE BEEN INTIMATE WITH.

The idea that not only did your partner have a life before you, but also a girlfriend, is mind-blowing.

And love is intimate. And intimacy is so deeply personal.

The fact that your lover has brushed lips with another lover is enough to drive the most sane woman to do wild, destructive things.

Plus, it makes us want to know: Who is this mysterious creature who has fucked my lover? What did her voice sound like? What sounds does she make during sex? And most wickedly, how do I compare?

How does my partner love me when they're ex was a fresh-faced California babe, and I'm a Manhattan vixen with red lipstick and a personality disorder?

But you know what, I've let girlfriends exes make me crazy for too long. Life is short and fleeting, and we could die at any time. I don't want to waste time on such unproductive, gross activities.

Now, I no longer so little as click on a girlfriend's ex's Facebook page. I want to know as little about her as possible.

Because I'm a romantic, baby. I don't need to obsess about the girls you've been with. I'm happy to live in the sparkly fantasy that I'm your only girl.

Look, I'm not thaaatttt insane. I know you've had girlfriends before I strutted into your world.

But it corrupts the innocence of our romance if I let her presence, her energy, penetrate into our precious, sacred relationship.

And that's what an ex obsession does. It lets another entity into your safe dynamic.

And for those of us who are monogamists, we don't need another person tossed into the mix, especially if they're a ghost from the past.

And that's what an ex obsession does. It lets another entity into your safe dynamic.

Because when you're obsessing over the ghosts of the past, you're neglecting the most amazing thing in the world: the present.

You're taking your vibrant energy and pouring it into something that is dead (a former relationship is DEAD), when you really should be channeling that energy into what's alive: your partner.

And if you dare to let go of the past and look smack back into their stunning eyes instead, the past doesn't exist.

In that moment, you're connected. And you're the only one who has ever made them feel the way they do right now, this second.

The only way to have more and more of those moments is to put that phone away, cut the stalking that's pulling you out of the present and hook into your partner, IRL.