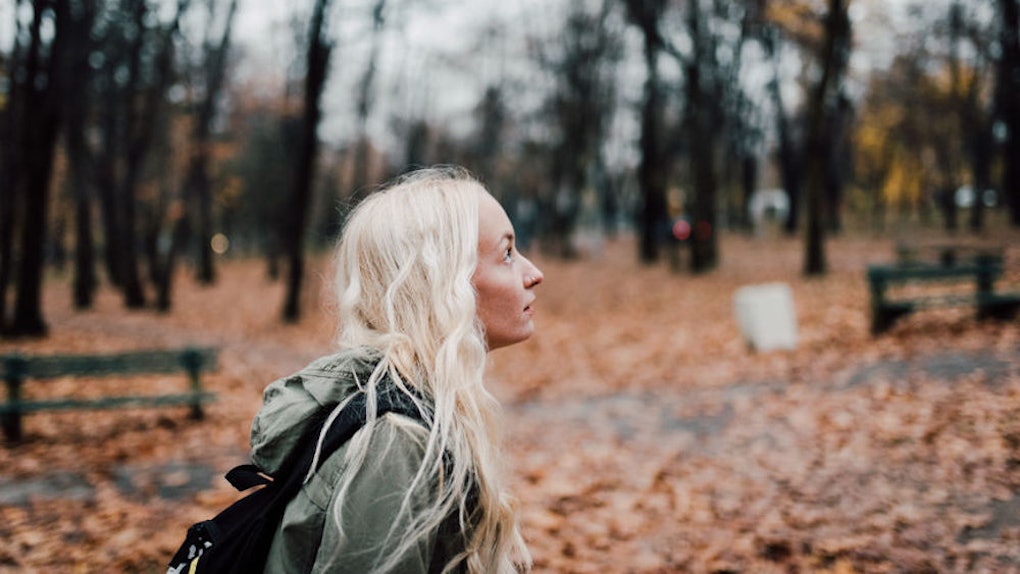 Apple cider donuts, pumpkin patches, and corn mazes — oh my! It's almost scary how much there is to do during the fall in certain corners of the country. Most of the time, you don't even know where to start. Should you go hiking, or maybe break out your fall sweaters for an entire afternoon? (Making room in your closet is going to be the worst, huh?) Well, let me tell you, there are a lot of little struggles you deal with in the fall, especially if you're from New England. Can I get a, "Oh my gourd?"

In my personal opinion, nobody quite does autumn like New England. I'm a little bit biased, having grown up and lived in the area since day one, but anybody who visits one of those huge fairs and sees the foliage from the top of a Ferris wheel would instantly agree (or at least be convinced a few minutes later after having a loaded baked potato).

Yes, those states really know how to make the most of these months — filling the air with cinnamon and getting outdoors to enjoy the natural beauty that awaits. Unfortunately, if you live in the area, you know that there are at least 15 struggles you face every year. Am I right?

1. Having Basically Only A Week To Enjoy The Fall Foliage

The fall foliage in New England is like an avocado. (Hear me out on this one, OK?) One second, all the trees are vibrant shades of green. You look outside your apartment window, and it could basically be summer. Then, you notice the tips of the leaves starting to turn yellow and think to yourself, "Fall is almost here."

Little do you know, that in just a week's time, all of those leaves will likely be red and on the ground. Just like that, it's winter and everything is bare. Maybe you'll catch the foliage next year?

2. Dealing With The Crowds At The Corn Maze

Especially if you're from New England, navigating your way through a corn maze is something you look forward to every single year. The struggle is real, though, when there are crowds and lines at your favorite local spot. You end up following a family who isn't your own, and taking wrong turns just to have more of an "experience." An hour or so later, you walk out of the maze feeling a little victorious and in quite the fall #mood.

Can we do it again, just without all the people? Thanks!

3. ...And Not Getting A Sticker At The Corn Maze

Arguably the best part of the corn maze is that sticker you get at the end that says, "I made it!" At first, you pretend that it's silly and you don't care much for it. But within minutes, you have a smile on your face and are wearing that sticker on your shirt with pride.

Every once in a while, the local orchard runs out of these badges of honor, and you have to walk away without any proof that you did a fall activity. Ugh, what gives?

4. Resisting The Local Apple Pies At The Grocery Store (Because You Already Have Three At Home)

Can you smell the cinnamon in the air? Yes, the second you walked into the grocery store, it hit you in the face in the most beautiful way. You followed your nose straight to the local apple pies, and contemplated putting at least one in your cart. (Nobody has to know that you already have three other pies at home.)

But, you resist. It's difficult turning your back on something so sweet, and you pat yourself on the back for not adding another pie to your collection at home.

5. Finding An Apple Tree That Hasn't Been Picked

Being from New England means that you go apple picking at least once a year. You gather up all of your friends or hit the road with your mom, and check out your local orchard. Together, you fill an entire bucket, and then bring it up to the stand to be weighed.

By the end of the trip, you're always dragging the apples down the rows because it's so heavy. But, you kind of have no choice because all the trees at the beginning have already been picked clean. You announce to the entire orchard, "This is my workout for the year." If you ask me, it sounds like the best form of cardio.

6. Navigating The Tourists On Your Favorite Hiking Trails

When the fall foliage makes its annual appearance in New England, you can count on having to navigate around tourists on your favorite hiking trails. They've come to peep the leaves, and you can hear them from miles away trying to take pictures of their feet in a sea of yellow and orange on the ground.

You put your headphones in and start going off the beaten path a bit. Being a local means you know some secret routes to the tower on top. Thank goodness, huh?

7. Convincing Your Bestie To Have Another Bonfire

Bonfires are #necessary, no matter what the season may be in New England. In the summertime, you and your bestie have them by the beach, and in the winter you snuggle up and make a s'more after a major snowstorm. It's probably the most outdoorsy thing you do, and always makes for some good memories.

But, sometimes your crew is totally sick of the usual campfire scene. They want to stay in and watch a bunch of Halloween movies instead of gathering up some wood and making plans. Convincing your bestie to break out the pit just one more time can be a struggle you know all too well.

8. Waking Up Early For Farmers' Markets

Why on Earth do farmers' markets have to be so early? Seriously, on the weekends you want to sleep in, and casually wander your way to the stands in late afternoon. But, it doesn't work that way, and you find yourself setting those alarms for 8 a.m. You complain all the way there, until you smell the aromas of fresh produce and apple pies. You even get caught up talking to your neighbors about homemade soap, and snag a couple of succulents for your space.

At the end of the day, you're grateful that you got up early and got the first pick of those fresh donuts. Waking up and brewing that Pumpkin Spice Latte was totally worth it.

9. Wanting To Take A Picture Of Everything

The saying always goes, "Stop and smell the roses." But, if you're from New England and it's fall, then it should really say, "Stop and take a picture of everything."

This time of the year, you want to pause in the middle of your hike or run just to snap a few artsy photos of the leaves. Truth is, no matter how long you've been in this part of the country, those bright leaves never get old. Everything is dreamy and quaint — and you're wishing it was like this all year, because unfortunately, winter is coming.

10. Waiting In The Longest Line Ever For A Loaded Baked Potato At The Fair

Three words: Loaded baked potato. Grabbing one of these heavenly creations is a must this time of year, and you head to the fair in hopes that everybody else in your group feels the same way. You beeline it for the stand, anxiously waiting in the longest line ever as you see potatoes in the hands of other people. You would do just about anything to dig your fork into all of that cheese and bacon right about now.

11. Wearing A Sweater, And Then Sweating All Afternoon

It doesn't matter how long you've lived in New England, you've never been able to get your outfit just right in the fall. It's inevitable that you're either way too hot or way too cold, because the temperature fluctuates every five minutes — or so it seems.

In the morning, you check the weather app on your phone and it's chilly. So, you put on a blanket scarf or oversized sweater and then head out the door. Before you know it, you're sweating on the subway or turning the AC on in your car. I know the feeling, and you're right in saying, "The struggle is real."

12. ...Or Having Way Too Many Sweaters In Your Closet

Do you have way too many sweaters in your closet? Me too! It's sort of a fact that everyone who lives in New England is a pro at bundling up. When winter comes around, scarves and boots are just necessary so that you don't freeze. But, you start prepping a little early, and pull out your favorite knits for the month of October.

You have to make space amongst your jackets, and end up throwing your T-shirts and summer clothes into bins. Sorry, not sorry. Sweaters take priority this time of the year.

13. Getting Prepared For Winter, Because It's Coming

Winter is right around the corner, whether you want to believe it or not. If you're from New England, you know how quickly the weather changes day to day. The beauty of fall turns into bold winds, and you have a frown on your face for at least three months. You didn't sign up for this, and don't even get me started on shoveling snow.

The best thing you can do is start mentally preparing yourself. Pulling out sweaters is always a good place to start.

14. ...Or Having A Snowstorm In The Middle Of October

It's fine. Everything's fine. Snowstorms in the middle of October is normal, right? Well, lately, it seems to be the trend and also your biggest struggle.

There was the year your town had to cancel trick or treating on Halloween because the power was still down, and you dug your car out of the snow earlier than usual. You would love, in those moments, to be just about anywhere else.

15. Finding A Fall That's Just As Good If You're Not In The Area

Let's be honest: Thanks to living in New England, you're officially the girl who's obsessed with fall. As much as you may complain about the lines at the corn maze or having to find the perfect pumpkin in the patch, you love it and embrace the season every year.

So, those few times when you're not in the area for peak foliage, or can't snag an apple cider donut — well, you feel out of place. You try and recreate your favorite activities and memories wherever you are, but it's just not the same. Fall just isn't as good anywhere else in the world. Oh my gourd — now that struggle is very real.