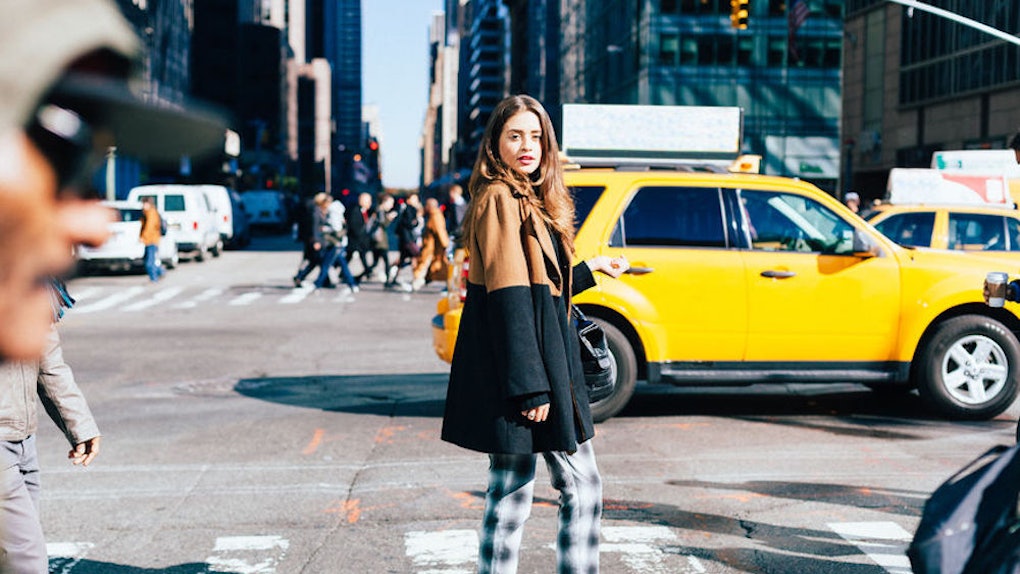 10 Fall Struggles If You Live In NYC That'll Make You Say, "Same"

The struggle is real. Will that phrase ever get old? Probably not. It'll get passed down from generation to generation, bonding everyone in its path and reminding you that you're not alone in this world. Especially when you're walking the streets of a city, your problems can feel so small. Don't worry: I hear you and those fall struggles if you live in NYC, loud and clear. *Sigh.* This is not what it looked like on Gossip Girl.

Growing up, you always had some big city dreams. You begged your mom to take the train into The Big Apple on the weekends, and had posters of the skyline in your room. You watched shows like Friends with your besties from high school, and imagined what your own apartment would be like. Naturally, you'd paint the walls purple and find that picture frame for around the peephole on the door. To top it off, you'd become a regular at a place like Central Perk.

Sure, you turned some of those visions into a reality. But, like a travel blogger's viral photo on Instagram, those television shows didn't show you the struggles going on behind the scenes. You never saw Rachel running through dirty and humid subway stations to get to her first fashion job, or the times when Monica had to dodge tourists on the sidewalk. Just like you, they probably dealt with these 10 fall struggles, too. Can I get a, "same?"

1. Breaking Out A Cute Fall Outfit, Just To Face The Humidity

Arguably the best part of fall is breaking out your cute new outfits. Especially in the city, where life feels like a constant fashion show, you're beyond excited to show the world that you're keeping up with the latest trends.

Truth is, you started shopping for sweaters and booties months ago. But, you woke up one morning in the temperature appeared to be just chilly enough to pull out that leather jacket. You tossed it on, feeling confident about your look and the start of your day. Little did you know, humidity was waiting for you on the other side of the door. Yuck, maybe tomorrow.

2. Going On The Subway, And The AC Is Already Turned Off

Who's in charge of the air conditioning? Seriously, you'd like to have a word or two with them on those 80 degree days in September, and even in October. Sure, the calendar says it's fall. But, as far as you're concerned, that doesn't mean your hair needs to be hit with a wave a humidity.

You run into the station and into the car, and audibly say, "Gross." There are a bunch of different aromas in the air, and you try to keep your nose close to your coffee for some better scents. Thank goodness your destination is only a few stops away. You probably wouldn't last much longer! Wait, why is the train stopping — what is this delay?!

3. Waiting For Forever To Get Your Pumpkin Spice Latte

When fall comes onto the scene, so do those beloved seasonal drinks. There are the Pumpkin Spice Lattes and the hot apple cider concoctions that you've yet to try. Let's be honest: You'll never steer clear of your usual order — and mostly because your barista already has it ready a majority of the time.

The struggle becomes real when these hot beverages hit the menu at your local coffee shop, because everyone wants to snag a sip. Suddenly, people who don't drink coffee have a solid reason to stand in line, and you're stuck waiting for them to figure out their exact order. How long have you been here? Like forever?

4. Dealing With The Crowds From Fashion Week

There's always something going on in NYC. It's called "The City That Never Sleeps," after all! But, fall means fashion week, and some of your favorite spots or routes are suddenly crowded with models, racks of chic dresses, and mannequins.

You have to dodge the cameras, or spend a little extra time in the morning curating your outfit. If the streets of this city weren't like an episode of Project Runway already, then these few days seriously turn every sidewalk into a red carpet. On the bright side, you might see Gigi Hadid or Kendall Jenner walking around the venues.

5. Spending All Of Your Money On Cozy Takeout Food

Takeout food is always a good idea, right? On any given day, you're texting one of your roommates that you're craving a pizza or pasta from that place down the street. Naturally, when you get home, the order has already been placed and the plastic silverware has come out to play.

Yes, you have a kitchen, but it's so small and not ideal for cooking a full-blown meal that you could easily get delivered to the door. The real struggle kicks in, though, when fall comes around. Suddenly, you're much more likely to spend all of your money on cozy soups instead of dealing with the lines at the grocery store on a Sunday night. Sound familiar?

6. Venturing Out To See Any Sort Of Fall Foliage

Skyscrapers are cool and all, but during the fall you just want to see some foliage. This part of the country is known for the vibrant hues of red, orange, and yellow that come out this time of the year. The hiking trails in the northern part of the state seem to illuminate, brighter than the skyline on an average night. Now, you just need to get a piece of that.

The few trees in the park near your apartment aren't enough. Nope, to see any real glimpses of the season you have to venture out, or head back to your hometown. So, you hop in your car and deal with the traffic that always builds near the bridge. *Cue the internal screams.*

This time of the year, your 'Gram could be #goals. There are cute farmers' markets in the squares with pumpkins and fresh produce, and you're wearing a sweater that would make your favorite fashion bloggers so proud. Even a snap of your cappuccino in an artsy coffee shop in the city is worth filling your camera roll.

The struggle is not wanting to look like a tourist. You live here, and rarely go to sights like the Empire State Building or the Statue of Liberty. Those iconic spots are destinations for when your friends or family are in town. But, they'd do so well on social media, and so you try and sneak a picture while crossing the street.

8. Wishing You Had A Balcony To Enjoy The Crisp Fall Air

The truth about having an apartment in the city is that it's small and costs way too much. You're essentially paying for a closet-sized room most of the time. But, you're also based right in the center of Manhattan. So, you can't complain, right?

Wrong. The struggle is real in the fall, in particular, because you just want to roam in the fall air and hang on a balcony while the streets bustle down below. Instead, you settle for the roof of your building and open up the small window in your room that faces, well, another building. Don't forget: You're technically living the dream.

9. Watching All The Stores Get Ready For The Holidays

What's worse than fall in the city? Watching every single store get ready for the holidays when it's barely Halloween. Yes, they start early, and you can't help but get a little stressed. You watch them put up lights on their windows, and start advertising sales that are happening this weekend — just in time for the holidays! You still won't start your shopping until a few weeks before your flight back home.

You'll continue to drink your Pumpkin Spice Lattes with pride and purpose. Good for you — you're a true New Yorker, now. *Round of applause.*

10. Admitting You Still Love The City, And Being Part Of It

Despite all of the struggles you face during the spookiest season of the year, you still love the city. You've made it your own, and can't imagine being in a place where you can't get pizza at 2 a.m. You hate the stuffy streets, and calling a taxi in the rain. But, you adore the windows on Madison Avenue when the holidays come around, and going for runs in Central Park. Dare I say: It's worth the high rent prices.

One day, you'll probably move out into the suburbs or change your location, and you'll look back on these days with only love. It's weird how that works, but you've accepted it.