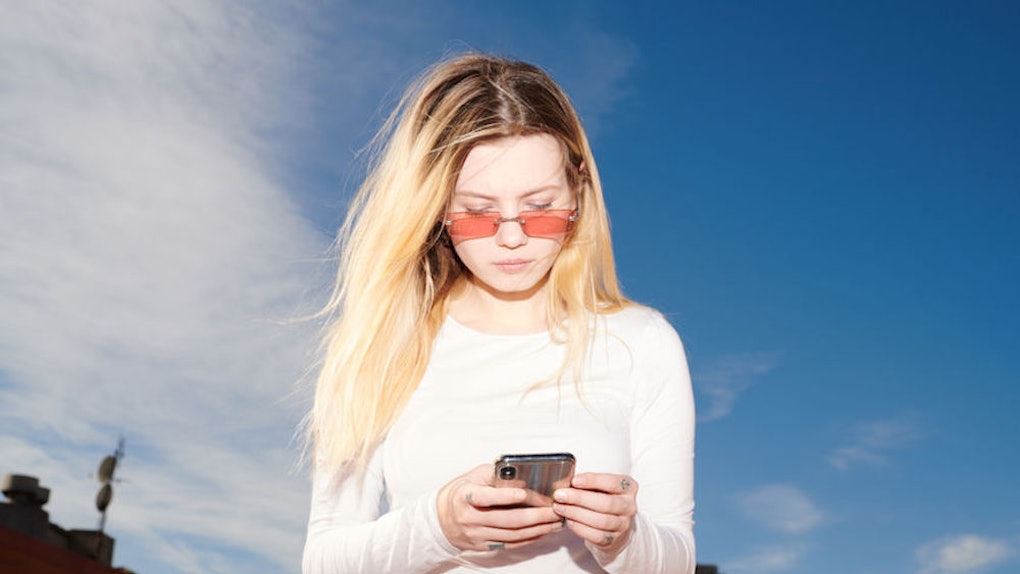 10 Emojis Millennials Love To Use & TBH, Wouldn't Want To Text Without

The spring of my senior year of high school, I got called down to our assistant principal's office. I won a superlative in our yearbook, and they wanted to run it by me. The superlative was, "Always On Their Phone." I could've easily been offended by this new title, but I embraced it because I knew it was so true. I texted in every single one of my classes. (Sorry, mom!) I was like most millennials, completely attached to the digital world and everything it has to offer. The emojis millennials love to use, in particular, became my forté. And to this day, I honestly couldn't communicate without them. Can I get a, "Same?"

Let's be honest: You rely on emojis to get your message across a lot. When your bestie sends you an embarrassing video from when you were teenagers, you instantly send the face that looks like it's saying, "Yikes!" When you want to spend a weekend night at home watching movies and eating pizza, you look for the pepperoni slice and text it to your roommates with a question mark.

Nobody's confused as to what you mean. They respond just the with heart in response to your sweet, "Have a good day," texts, and the hundred points one when you show them a selfie. These 10 emojis, though, are what you all live by — the ones that you really wouldn't want to communicate without.

1. The Monkey Covering Its Eyes

Every once in a while, your bestie sends you something particularly cringe-worthy. Sometimes, it's a video she found online that's super, well, cringe-worthy. Other times, it's a text like, "Oh my god. I just spilled my coffee everywhere." In those moments, you always opt for the monkey covering its eyes emoji. (At least your coffee is in tact, right?)

Next to the confetti, balloon, and champagne emoji, the two raised hands are meant for celebratory moments. They're meant for responding to texts like, "I just totally aced that exam," or for emphasizing a photo of your bestie where she's really rocking her new outfit. Personally, I use them all the time for cheering my people on on social media or in a situation that's worthy of the hashtag #goals.

3. The Group Of Sparkles

Some millennials love to find the "aesthetically pleasing" things in life. (Guilty.) These can be the cohesive and dreamy feeds that their favorite influencers or bloggers work so hard on, or the apartments that are perfectly decorated with succulents and peach-colored pillows. They mark what's trendy, cool, and chic with the group of sparkles emoji, so that the entire world knows. Yeah, that sunset at the beach? On point!

4. The Face With Rolling Eyes

Life comes with its good and bad days. The good days are often rewarded with text messages filled with the thumbs up or heart eyes emoji. The bad (or just annoying and frustrating) ones are often paired with the face that's rolling its eyes.

It perfectly describes how you're feeling about your boss who isn't listening to your new ideas, or the person on the subway who's watching a video with full volume in your face right before saying, "Ugh!"

The handshake emoji seems to have just come on the pop culture scene. But, that doesn't make it any less important in your communication and texting routines. In fact, it's more crucial now than ever before when you're trying to compose a funny tweet.

I mean, how else are you supposed to show your followers that fans of Taylor Swift and Marvel's Avengers: End Game are feeling the exact same way about April 26? (Spoiler alert: New Taylor Swift music might be dropping on that day, as well as the highly-anticipated film.) Beats me!

The fire emoji is always in the "frequently used" section of your emojis. That's because you hype up your besties on the reg. (It's kind of your job as the BFF, you know?)

Every time they post a selfie on Instagram, you comment with this emoji. When they get a really cool idea for a new fashion label they want to start, or give you a solid piece of advice, this emoji finds its way into your messages once again. Honestly, what would you do without it?

7. The Cup Of Coffee

They say that when life gives you lemons, you're supposed to make lemonade. But, what about when it gives you some piping hot tea that you need to tell your besties about? Well, you send the cup of coffee emoji.

Yes, some can argue that it's not technically tea. It gets your point across, though. What you're about to serve is good. It's the latest gossip, the deets, and the exclusive 411.

I rely on the camera emoji a lot, especially when I'm posting something on Instagram. It's the best way to tell my followers that someone else took my picture of me, for me — and it's simpler than writing out words like, "photo credits."

You may have a similar experience with it, or occasionally swap this emoji for the capture that's in-action. Either way, it's crucial to your feed and contributes to creating only the best captions.

When I'm sending a text to my SO, I always use the red heart emoji. In my mind, it's just sweet and romantic, and emphasizes every, "I love you." When I'm texting my besties, though, I always send the double pink hearts emoji. To me, it symbolizes a friendship kind of love — the kind that's unconditional, hilarious, and full of long-lasting memories. Do you feel the same way? I sure hope so!

Last but not least, the butterfly emoji is crucial to expressing your more delicate thoughts and feelings. It perfectly accompanies the long captions you sometimes write on Instagram, about your daydreams or the unexpected things that happen in life. It also is your go-to emoji in the spring and summertime when you're really living your best life.

Like most emojis, you don't know how you'd really communicate without it. The small, digital image understands you and your brain in ways you can't quite describe.

There are so many millennials who feel the same way — including me! So, don't worry and keep on typing the peace signs, turtles, and cups of tea you love to use.

More like this
How To Play TikTok's Copy The Shape Challenge Using Any Item In Your House
By Kelly Pau
What Is The Pinterest Lookalike Trend On TikTok? It's A Shocking Selfie Hack
By Marisa Casciano
Here's How To Use TikTok's Immersive Music Creative Effects For The Coolest Videos
By Cianna Garrison
Stay up to date