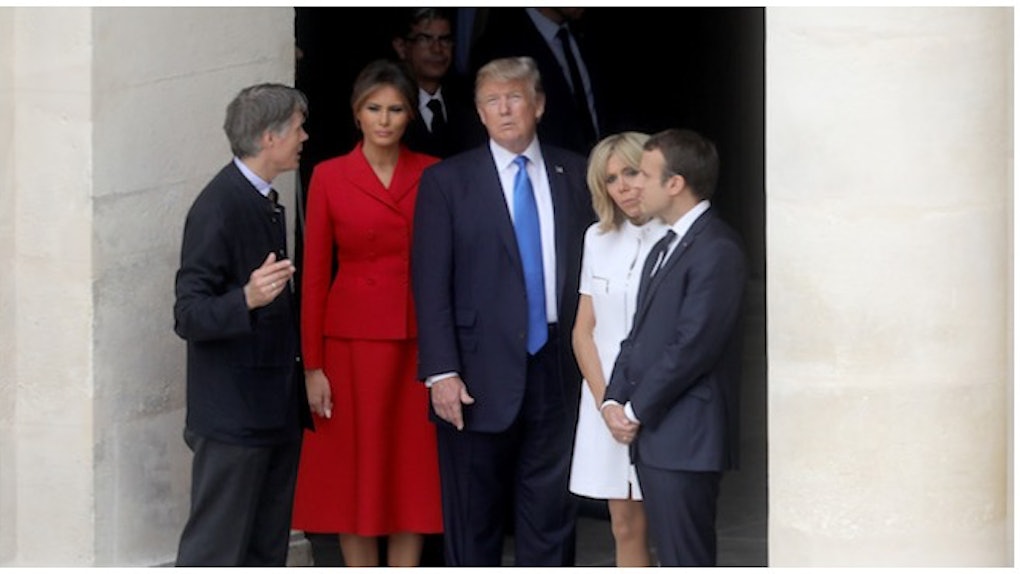 Donald Trump's Comments On Brigitte Macron's Body Are Not OK

President Donald Trump and wife Melania arrived in France early on Thursday, July 13, to attempt to strengthen ties between the two countries -- and to celebrate Bastille Day with President Emmanuel Macron and his wife, Brigitte. And the first meeting did not go well.

The initial greeting between Trump and Brigitte Macron was, in itself, awkward.

But then Trump crossed a line.

One can assume that he was also implicitly commenting on the infamous 24-year age difference between Brigitte and Emmanuel Macron. (She was his 39-year-old schoolteacher when they met.) There's a hint of incredulity with which Trump commented on her physique that implied, you look great... for your age.

This is a pattern for Trump. He has made sexist comments about women before. Many times. In fact, The Telegraph made a Trump sexism tracker because he so frequently makes sexist and misogynistic comments.

And he often talks about women in terms of physical appearance, including his recent remarks about Mika Brzezinski and that strange encounter he had with an Irish reporter a few weeks ago, in which Trump complimented a female reporter's smile.

While he has never been charged with sexual assault, he has been accused of it by a myriad of women over the years (he has denied these accusations). And in case you forgot, Trump was caught on tape saying,

And now, he has focused on Macron's physique.

To talk about a head of state's wife in such a sexist manner -- and in public, with cameras around, no less -- seems to show how little respect he has for anyone or anything but his own impulses and entitlement.

And when you compare how he talks about (and insults) men, versus how he talks about (and insults) women, the difference is clear: to Donald Trump, women are mere bodies to be consumed and enjoyed -- or rejected. He has called women "fat pigs" in the past, and when Miss Universe Alicia Machado gained 12 pounds, he reportedly called her "Miss Eating Machine" and told her that her weight gain interfered with her duties.

It's difficult to imagine him talking about President Macron in the same way, complimenting his slender figure.

There is an implicit sexism in discussing women's appearances, scrutinizing them in a way that often reduces them down to just looks, professional accomplishments be damned. And Trump's comments are more than just embarrassingly tone deaf.

They speak to a larger culture his administration seems to be pushing. Sexual assault guidances through Title IX -- meant to protect survivors and prevent more assaults in schools -- are at risk. Planned Parenthood's funding is at risk. Access to birth control is at risk. Trump has previously disclosed that he thinks women who get abortions should be punished. Women are at risk.

These are not just words. These are the words of a man who wields unparalleled power, and he is using that power to reduce women to just their bodies.