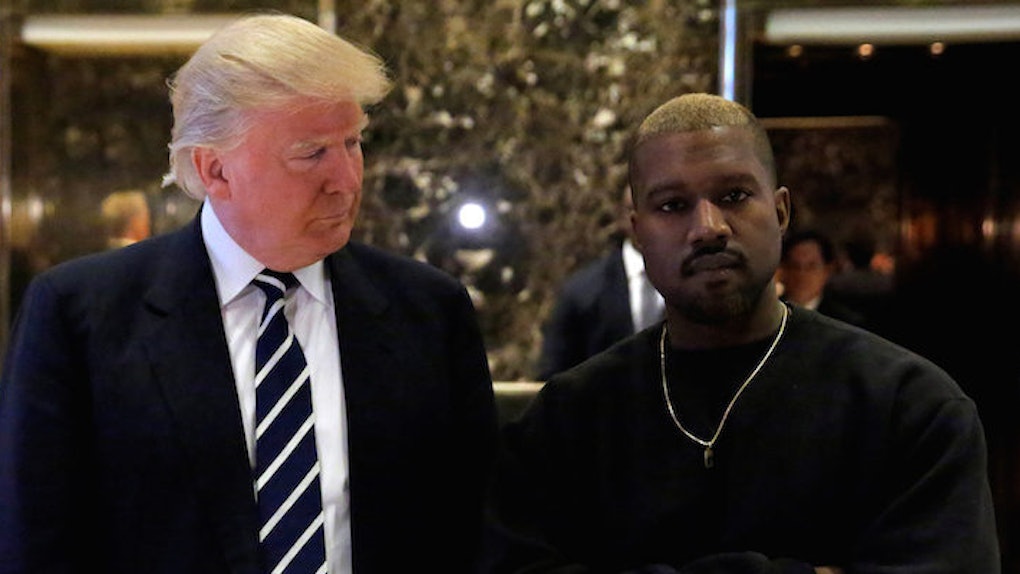 Crazy, right? Wow, we have so much to discuss about this.

What does it all mean? Will Kanye perform at the inauguration?

Will Trump appoint him to a Cabinet position? Will we all have to burn our Yeezys and stop listening to Late Registration?

Oh, yeah: That was a thing that happened.

Trump was supposed to have a news conference on Tuesday to discuss how he will handle his business while serving as president.

This is a pretty big deal. Trump's international business ventures present massive potential conflicts of interest as he serves in office.

He has been unclear about what exactly he is doing about that. He has said he won't be working on his company while being president, but we don't know the details about what's going down.

So, this press conference was going to be a useful moment for the American public. We would be able to learn if our incoming president is going to be dealing with horrific conflicts of interest.

He sent out a tweet saying he'd have it later.

What exactly is keeping Trump so busy, he can't talk about potentially the most serious issue of his presidency?

Meeting Kanye. Meeting Kanye took priority over telling the American public what he is doing about conflicts of interest in his presidency.

What else did Trump not talk about so he could instead spend time with Kanye? Harassment he has caused.

There has been a reported rise in harassment and intimidation since Trump won the election.

This harassment is noted to be coming from Trump supporters, and is prompted by discrimination based on gender, sexuality, religion and race.

Trump has addressed it once, when he was asked to on "60 Minutes." He said he hadn't heard about it, and gave a very eloquent "Stop it."

Trump also prioritized his meeting with Kanye over discussing the ongoing massacre in Aleppo.

People are being killed in Aleppo, Syria, as I write this.

Trump ran on a campaign of Islamophobia, saying he would not let Syrian refugees – or any Muslim people – into the country.

So, what's the plan with that now? We'll never know because Trump is too busy hanging out with Kanye West.

Instead of explaining why he picked leaders from Exxon Mobil and Goldman Sachs for his Cabinet, Trump met with Kanye.

Trump is planning to pick Goldman Sachs president and COO Gary Cohn for director of the White House Economic Council.

Now, correct me if I'm wrong, but I believe Trump railed on Hillary Clinton for having connections to Goldman Sachs. Why exactly is it cool, then, for Trump to put Goldman Sachs in the White House?

TRUMP IS A LITTLE BUSY MEETING WITH KANYE RIGHT NOW, SO HE CAN'T TALK ABOUT THAT.

Trump announced on Tuesday morning – pre-Kanye – that he had selected Rex Tillerson, CEO of Exxon Mobil, for secretary of state.

Now, I'd love to know why the CEO of Exxon Mobil would be a great pick to talk to foreign leaders about international climate agreements, but Kanye has Trump's ear.

Trump is refusing to entertain talk on the CIA concluding Russia helped him win the election. But he is happy to talk to Kanye West.

I don't know about you, but I'd much rather spend an hour of a news cycle talking about the CIA's findings that Russia interfered in American politics to support Trump.

Gosh. If only we had something like a press conference for Trump to answer questions about this.

Or for Trump to answer questions about Tillerson's very close ties with Vladimir Putin.

But folks, Trump is a little busy this Tuesday morning.

He has important business to attend to... like meeting with Kanye West.