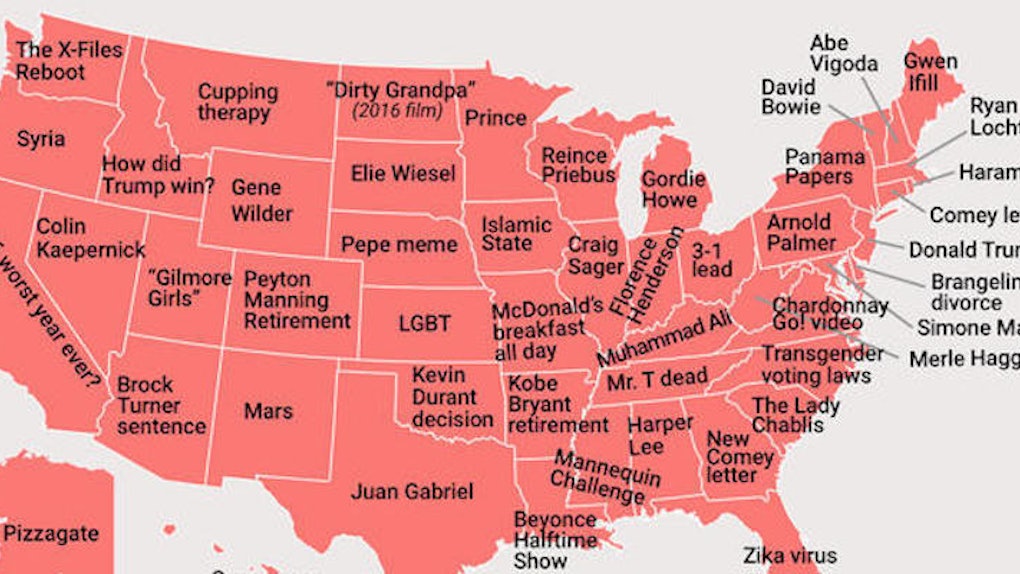 As the year comes to an end, there are a variety of ways to look at it.

You can list the best new music, remember the special people who died or note what will end up in the history books.

But if you really want to know what people were trying to figure out in 2016, you need to check out their Google searches.

This is exactly what Estately did. The housing app figured out what individuals in every state were disproportionally typing into their Google search bars this year.

It's a pretty illuminating look into the year. Some of the top searches are reminders of what a scary year it is, like Florida's top search of "Zika virus" and Iowa's "Islamic State" search.

California got it pretty right with a "2016 worst year ever?" top search. Let's investigate what other states thought.

Many states were particularly interested in hometown heroes who had died in 2016.

This included "Juan Gabriel" in Texas, "Muhammad Ali" in Kentucky, "Prince" in Minnesota and "The Lady Chablis" in South Carolina.

Sports make up a decent portion of the Google searches per state.

The "Olympics" made an appearance with "Simone Manuel" in Maryland and that weirdo "cupping therapy" in Montana.

I'm particularly tickled by Ohio's top search of "3-1 lead." Congrats to the Cavs!

Pop culture made an appearance in a few states.

Delaware was particularly interested in the "Brangelina divorce." "Beyoncé halftime show" made it big in Louisiana, and Washington seemed really excited about "The X-Files Reboot."

Memes made appearances too, of course.

"Pepe meme" was the top search in Nebraska, Alabama was all about the "Mannequin Challenge" and Rhode Island paid its respects to "Harambe."

The "Pepe meme" became political, which also made up a decent percentage of searches.

Idaho asked what we all asked: "How did Trump win?"

Alaska wondered about "Pizzagate" while New York was interested in the "Panama papers."

Above all these searches, however, there was Missouri FTW.

My darling home state wasn't concerned about sports or politics or pop culture or people dying.

Missouri was just concerned about "McDonald's breakfast all day."

Missouri, you the one.