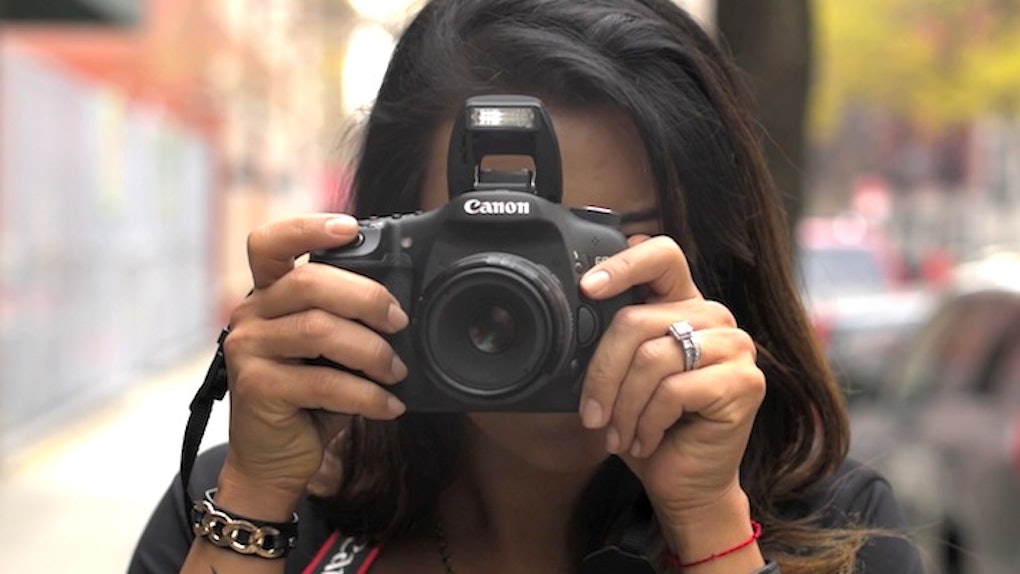 How To Take The Perfect Dick Pic, From A Professional Dick Photographer

Sending and receiving dick pics is a rite of passage for any sexually active young person. It just is.

I can guarantee, however, that no matter how many pictures of dicks dudes have sent and women have received, none have been quite like the ones from photographer Soraya Doolbaz.

Soraya Doolbaz is a photographer in New York who, yes, takes dick pics professionally. But clearly they're not your average dick pics. She wants to make you laugh.

She writes on her website's About me page that although the main purpose of this project is for the sake of humor, she also points out that our society has been mainly inundated with pictures of tits and asses due to the dominance of the male gaze. So now, she wants to give dick pics some time in the spotlight, albeit as an "artistic take on an otherwise alluring modern dating tactic."

I wondered what guy would be proud enough of his dick to allow a stranger to dress it up as Donald Trump for the sake of art. I also definitely wanted to know the secrets for taking the perfect dick pic, just to pass the knowledge onto my male friends who are trying to impress a lady. Or to any of my future boyfriends who try to turn me on with one. I mean, do you see the detail on Benito Mussoweenie's head and the hair peeking into the frame? The woman knows what she's DOING.

So I called her to talk about it.

"I was shocked into laughter the first time I got my first dick pic," she told me on the phone. "And I just couldn't believe that somebody would do that. And then, when discussing it with my girlfriends and realizing this is a normal thing that happens, I was like... 'Wow, I wanna see more.'"

Soraya's inspiration for this project was the way some women feel after receiving an unsolicited dick pic (confused and grossed out among other feelings). So her project aims to help women take back the power with some humor.

"Let's make fun of this concept called dick pics!" she said. "Lets force guys to take better ones and put some effort into it. If you're gonna show me your dick, make me laugh a little bit."

Here's how Soraya takes her perfect dick pic. And how you can, too.

"First and foremost: BYOF. Bring your own fluffer," she said.

"Fluffer. A fluffer is a partner you bring to the photoshoot that puts the costume on and makes sure your dick stays hard."

Oh. I immediately understood why men volunteer for this project: so their girlfriends can play with their dicks for hours.

The fluffers are the ones who actually bring in the guys -- framing the shoot as a token of their admiration of their boyfriend's dicks.

"[The fluffers are] how I know the models," Soraya said. "I meet women that want me to shoot their boyfriends or husbands, and they position it as a gift to them. They say, 'I would like to honor your dick with this photoshoot,' so we organize it, and it becomes a thing."

Men, for your own personal dick pic photoshoot, your own hand will probably do the trick for a fluffer. Keep jerking it off to make sure it doesn't go limp. Because as Soraya said, "There's nothing really funny about a limp dick."

Tip 2: The angle is everything.

When taking a dick pic, Soraya stressed the importance of the angle.

"If you're taking your own dick pic, Point of View is the classic one. The balls aren't in there, it gets the point across, and you know, that's the standard dick pic. If you wanted to do more of like a body shot -- let's say you have a full length mirror and you want do a sideways shot with a little of your body in there -- that's awesome, too. Another that's great is [putting] a reverse camera on a table. Lean over it, but still keep the balls out of it. And when you hit focus on the camera, your dick is front and center in the shot while your body is blurred in the background. That's a really artistic shot."

From the previous quote, Soraya seemed really against having balls in your dick pic. So I asked her what a guy who's super proud of his balls should do with them. She wasn't having it.

"Personally, and [according to] the other people I've talked to about this, the balls are best kept out... For a really good dick pic, keep them OUT."

Tip 4: Lighting, also, is everything.

Attention men who take dark, grainy pictures in their bedrooms at 2 AM: Don't. Because lighting is extremely important.

"You need really good lighting," Soraya said. "There's different lighting you can do. Theres spot lighting, where you're focusing the light right on the dick. [For others], I have light only coming from one side to create a more dramatic portrait, if you will."

Do you want your dick to be cast in a mysterious noir film? Or frolicking in a grassy meadow under some direct sunlight? You have to decide. These are important things to consider for your style of the portrait.

Soraya said she takes hundreds of pictures in each photoshoot and chooses the best ones. So, your first dick pic shot probably won't be your last.

PS, don't forget to delete all the bad shots from your iPhone reel. And maybe the good ones too, in case someone decides to hack into your cloud.

Tip 6: Make sure she actually wants a picture of your dick.

"My number one tip for dick pics -- and it's important that you put this down -- [is] make sure you have either been intimate or he or she has asked for it. The number one mistake people make is sending unsolicited dick pics."

Let me repeat: A girl is going to be weirded out (and possibly really upset by) your dick pic if you don't let her know you're sending it first.

Sure, there are ways to make us feel less uncomfortable with a picture of your dick. Like, for example, by dressing it like Donald Trump a la Soraya's project. But there's an easier and less humiliating way to help women feel ambushed by dick pictures: Just freaking ask permission first.

Soraya is already working on her next "dictures" project, where instead of dressing dicks up as celebrities, she plans on taking inspiration from people she's encountered in her real life, like someone she went to high school with or someone she dated.

So far, she's got a character in the works named Dustin, a "jean jacket [wearing], bearded sunglasses guy [who's] a graphic designer from Oregon. He drives a Prius, and even though his neighborhood doesn't collect compost, that doesn't stop him from composting. And he only shops at fine cheese shops, and that's his opener at parties."

Thanks to Soraya, it's even more likely that the recipient will be happy to receive your next dick pic ... because she's imagining it as a staunch environmentalist.