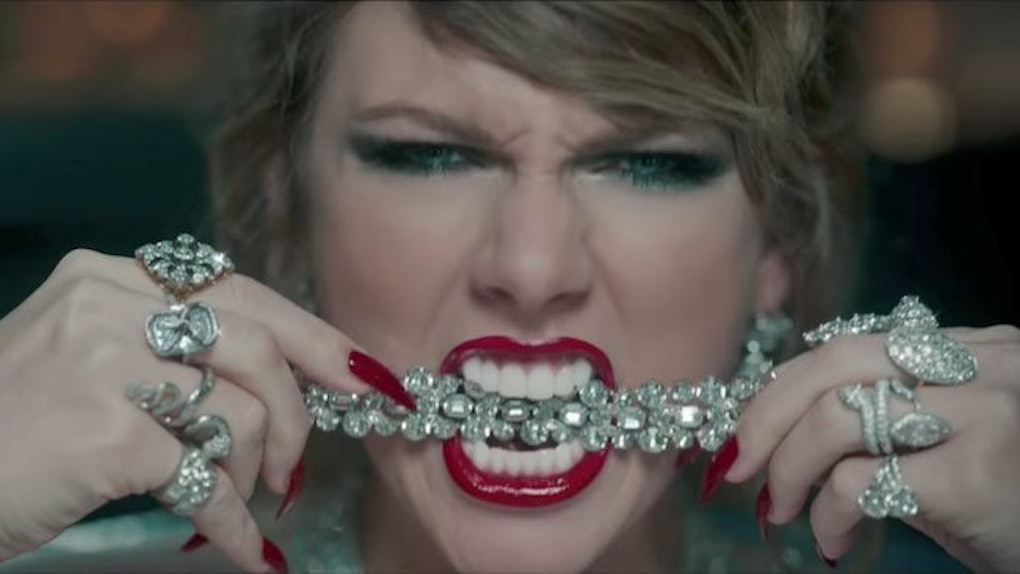 Whether you love or hate her, one thing is for sure — you are definitely talking about Taylor Swift. On Aug. 23, she revealed the name and release date for her newest project: Reputation. Then, four days later, she dropped the music video for her first single, "Look What You Made Me Do," during the 2017 VMAs. For being MIA during the past year, she's definitely made up for lost time. Swifty is on a rampage to take over the world, and no one will get in her way. She's off to a good start: Taylor Swift's single shattered Spotify records and it's a really big deal.

What does this mean exactly? A PR rep from Spotify told Elite Daily that Swift's newest single was streamed over 10. 1 million times IN. THE. FIRST. DAY. That's a freaking ton. To give you an idea: Swift didn't just break a "release day" Spotify record, she actually had the biggest streaming day for a single track in Spotify history. You go, Glen Coco.

Whether you're a Taylor Swift fan or not, pure curiosity has probably gotten the best of you by now. Swift has taken as much heat as she has praise for her new project.

Honestly, the old Taylor can't come to the phone right now because she's dead, so I doubt she cares what people on Twitter are saying. Here's my plan: To actively obsess about "Look What You Made Me Do" and analyze it to death until the rest of Reputation is released on Nov. 10. Who's with me? I've spent hours staring at a single text from an ex, so a few months to mull around a four-minute music video will be no problem.

I have to hand it to Taylor Swift, she came back in a big, big way. Shattering a gigantic Spotify record is a major feat, and she's obviously worked hard for her success. Now, Reputation, leggo.