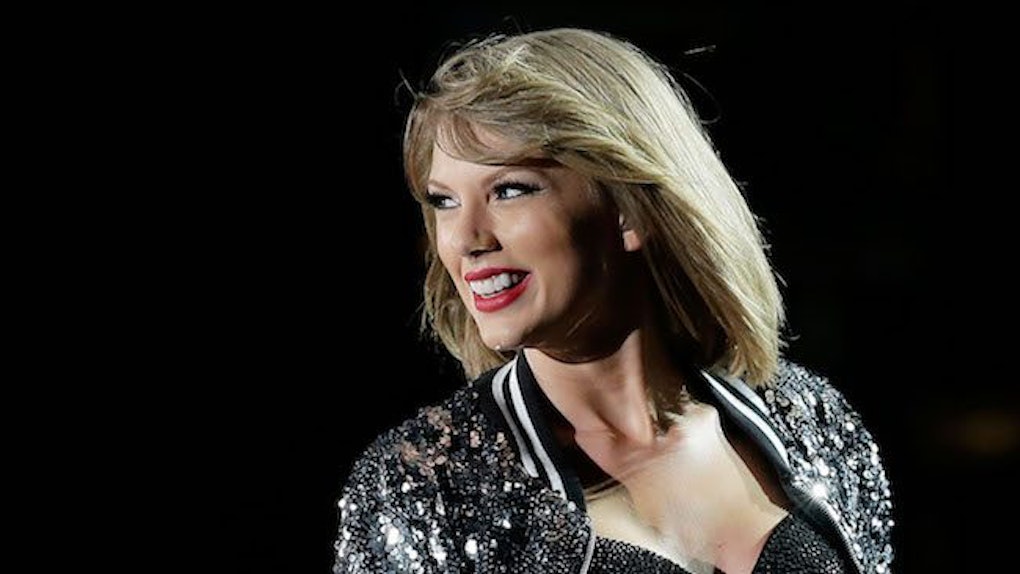 Is Look What You Made Me Do A Diss Track, Probably Not

Last night, Taylor Swift debuted the video for her new single, “Look What You Made Me Do” at the 2017 MTV Video Music Awards. The video was released only 10 days after Taylor abruptly deleted everything from her social media to promote the new single and album. Her departure, and subsequent re-emergence with scattered clues, was clearly meant to garner anticipation for a new project. Maybe, on some corners of the internet, it succeeded; however, as some began to excitedly analyze Taylor's hints, others took to social media to point out her similarities to Beyoncé's Lemonade and the general dramatics of Taylor's Instagram teaser. But is "Look What You Made Me Do" actually a diss track?

On August 23, Taylor (finally) released the name and release date for her newest project: Reputation, due out in full on Nov. 10. Immediately, people noted that Taylor had lined up her album's release date with the 10th anniversary of Donda West's death. With the video's release, and confirmation that “Look What You Made Me Do” was meant to be (in part, a Kanye diss track), fans are quick to assume there's little to no coincidence in Taylor choosing the release date that she did.

So far, Reputation seems like a middle-schooler's dramatic diary excerpt; when they swear the world has ended and they've come out a brand-new person -- all over something as trivial as a pimple. It speaks to the overall issues I have not just with “Look What You Made Me Do” as a single, but with Taylor as an artist and the people -- from fans to media -- devoted to supporting her.

“Look What You Made Me Do” opens with a close up of a graveyard headstone, engraved with “Here Lies Taylor Swift's Reputation.” It's safe to assume this is meant to be a slight to Kim Kardashian releasing audio tapes of Taylor agreeing to Kanye's “Famous” lyrics: “I feel like Taylor and I might still have sex/ Why? I made that b*tch famous,” and the subsequent backlash Taylor received. The video goes on, from taking shots at Katy Perry to the infamous scene of Taylor on a throne, surrounded by her reptilian kin. It culminates in the final scene, where Taylor is confronted by all her past personas -- from curly-haired country Taylor to ringmaster Taylor. Each persona takes jabs at each other, bringing up “stereotypes” from the media. The scene ends with another clear Kanye jab when Taylor from the 2009 VMA awards leaned forward amidst all the fighting and said, “I would very much like to be excluded from this narrative.”

It's symbolic that Taylor chose to premiere “Look What You Made Me Do” at the VMA music awards. The VMAs is what pushed Taylor into pop music and it's where Kanye, ultimately, did contribute to her fame, or at least notable attention from that night. While Taylor might have tried to “reclaim” it in her newest video, the fact is that Swift often paints herself as the victim in situations and milks it to her benefit. Taylor has made an entire career off relying on white femininity. White feminism, according to EverydayFeminism.com, is feminism that excludes intersectionality. We see this version of feminism play out -- whether intentionally or subconsciously -- in Taylor's refusal to take responsibility for any of her actions that offends people of other races. That, paired with American media's tendency to paint black people as "problems" (from devaluing intellectual and creative labor, as we see with Beyoncé, to the continuation of Swift and West's “beef”), only works to help grant Taylor's "innocence" within the public sphere. Although, to be clear, Taylor Swift has never called herself a feminist publicly, and she's never denoted whether she's a "white feminist" or not.

It's not hard to draw the parallel that “Look What You Made Me Do” is the anthem of a privileged woman -- the ones who can't comprehend the backlash they rightfully receive, and who refuse to recognize their own agency. But let's make one thing clear: As much as Taylor tried it, this is not a diss track.

So What Is A Diss Track?

A diss track requires substance. A diss track is meant to make a record scratch on your life; it's meant to halt everything while you re-evaluate your position, like the opening of a '90s movie. They're meant to stir the water. The best ones go past subbing to dropping names outright, such as Tupac's classic “Hit Em Up.” While Taylor's single is definitely full of subliminal points, there's nothing threatening or new about about it. At most, Taylor invokes common images of herself within the media to “reclaim,” while repeating that this is what we made her do, as if Taylor isn't a grown, white woman in an industry that prioritizes grown, white women.

Over the past few years, Swift has tried to repeat her formula for success by beefing with Katy Perry. Admittedly, I don't normally linger in the dark corners of the internet where people care about Taylor on a good day, but I think it's still safe to say nobody particularly cared about their drama. Aside from the 30 minutes we all spent wondering what was happening, and why, Swift's beef with Perry quickly faded into irrelevance. It became clear that, in order to have “beef" with continuous relevance and scale, Swift needed to focus her attentions away from replications of herself. Instead, black beef made Taylor Swift famous.

Not just because the media will always have a strong sense of voyeurism when it comes to anything a black person's involved in, but also because Taylor can maintain advantage. The trope of white women requiring protection from black men is nothing new; it plays off age-old traditions within media where black men were painted as violent. It's easy to brush this trope off as something that "hurts" Taylor because of patriarchy, but white femininity built itself primarily in relation to anti-blackness. It is, and has historically been, complicit within violent politics.

As a white woman, Taylor might not be fully aware of the ways in which she utilizes her privileges against black artists, but that doesn't mean they aren't there. It's why we see Taylor continuing to milk a moment from eight years ago, still feigning shock over what happened. In her new single, Taylor sings, “I don't like your games/ don't like your tilted stage/ the role you made me play,” when the reality is Taylor crafted that role for herself. What destroyed her reputation was not just her continued “beef” with West, but her overall entitlement and dismissal of the valid criticisms lobbied against her, which included her exclusion of other women (both diversity-wise and non-models) in her coveted "squad," and of course, playing the victim.

While I wouldn't say Taylor appropriated Beyoncé with this single, I do think it helps clearly illustrate the entitlement Taylor feels toward black women's creative expression. It's an entitlement fostered by the music industry as a whole, an entitlement that is evident in the fact that Swift sues people over copyright infringement with regularity, yet, as evidenced by the internet, has no problem imitating another artist's expression to her benefit. (For her part, Swift has not said that the "Look What You Made Me Do" video was inspired by, or meant to imitate, any other artist's work.

For many swift fans and critics alike, there is nothing brave or new about “Look What You Made Me Do." It's not a diss; it's not beef. Instead, it's simply Taylor seeking validation from the usual sources who have excused her throughout her whole career. If there is anyone to blame for Taylor's reputation and its death, maybe it's the people who taught her that white womanhood would not only save her; it would elevate her.

It's worth pointing out: Nobody made Taylor Swift do any of this.