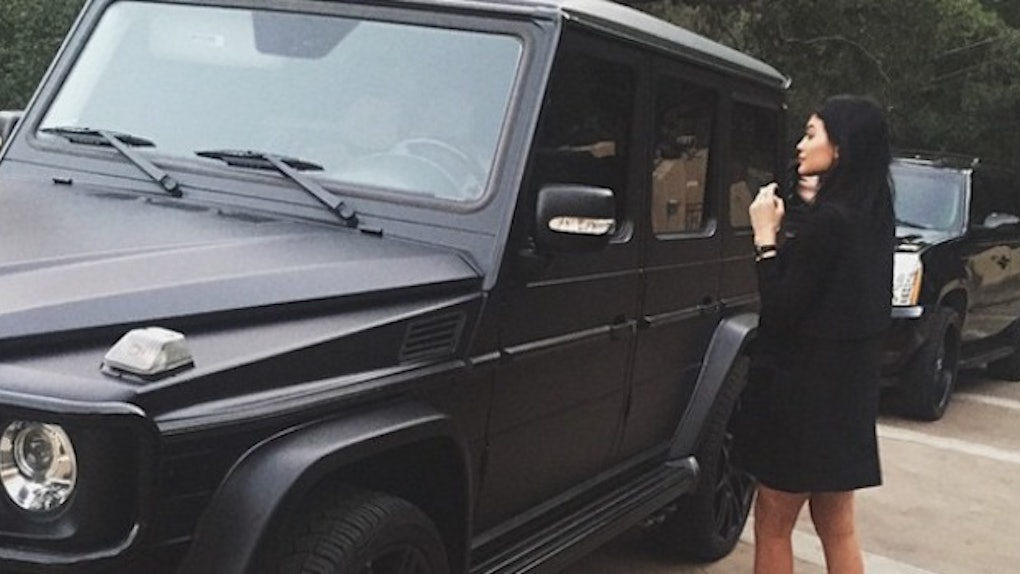 Let's Get Real: How Many Cars Does Kylie Jenner Actually Have?

Kylie Jenner is 19 years old today, and in the least surprising turn of events ever, she got a car for her birthday.

Actually, she got two cars for her birthday: one from Tyga, and one that she bought for herself.

If you feel like you're having déjà vu, don't worry. You're not caught in "The Matrix:" It's just that the same thing literally happened at Kylie's 18th birthday. And her 16th birthday. And sometimes, it even happens when it's not her birthday.

But I have a few questions: Does Kylie Jenner even drive? Does she know how to pump gas? What the eff does she need all those cars for?

Like, you know who needs a car? People who have to go to work.

You know who doesn't need a car? People who have their own personal drivers.

Where is Kylie even driving to?

But the biggest question of all is this: HOW MANY FREAKIN' CARS DOES THIS TEENAGER HAVE, ANYWAY?

Let's figure this out.

Nicknamed "The Wagon," this $125,000 vehicle was Kylie's first car. It was gifted to her on her 16th birthday, shortly after she got her license. Mere weeks later, Kylie crashed this car into the back of a Toyota.

Less than a year later, in the summer of 2014, Kylie got a second car. This time, it was seemingly just for fun.

Kylie Jenner got a Ferrari from Tyga for her 18th!!! pic.twitter.com/VpVlW0NQum — Lucy's Boutique (@lucys_boutique) August 10, 2015

Kylie's third car was a gift from her boo, Tyga. It was given to her for her 18th birthday last August.

Despite the fact that October is nowhere near her birthday, Kylie got this brand new car delivered right to her feet in October 2015.

This year for her birthday, Kylie went ahead and bought herself a new car. But not to be outdone, Tyga also got her...

Yep, Tyga got Kylie a car for her birthday yet again, making this Kylie's second Mercedes-Benz and her sixth car. (Of course, it turns out that Tyga didn't exactly have the money to buy that car, but that's another story.)

So, how many cars does Kylie Jenner have? Six.

Well, six we know about.

That's an average of two cars a year since she turned 16.

Cool. I'm just going to go give up on everything now.