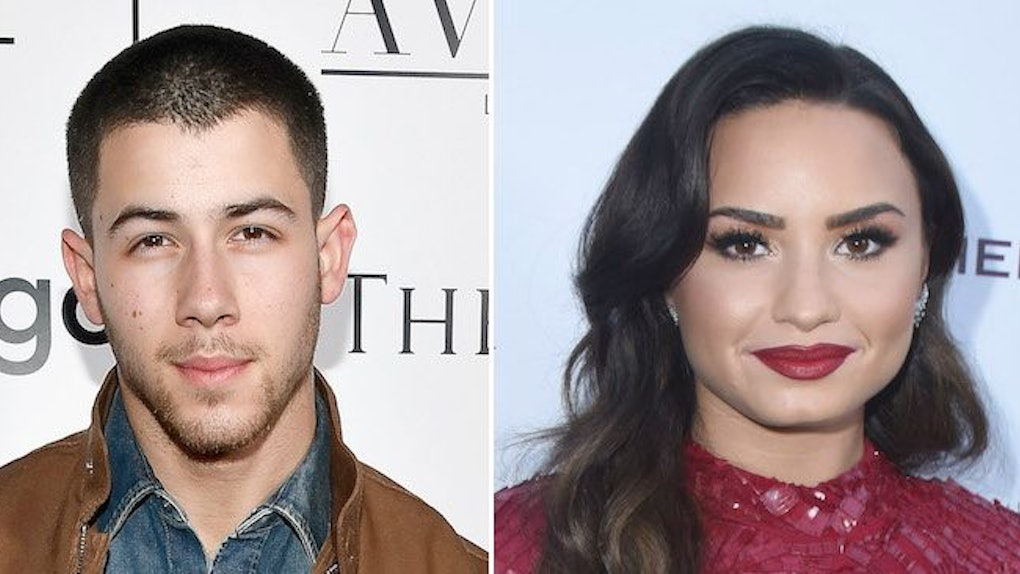 Demi Lovato's new album is dropping on Friday, Sept. 29, and there are already so many questions surrounding it. Her songs always have deep personal meaning and usually tell a story about her life. The biggest question mark surrounding her newest album, Tell Me You Love Me, has been: Is Demi Lovato's "Ruin The Friendship" about Nick Jonas? The answer is... maybe.

The title of the song alone had fans speculating, but the preview exposed a few more clues. Teen Vogue reports the first verse begins,

Put down your cigar and pick me up. I'm thinking we should cross the line. Let's ruin the friendship.

According to Noisey, Jonas is a lover of cigars — making this clue numero uno. The chorus continues,

This song is definitely about one of her friends — someone fans probably know about. Lovato gave a little insight into the song during her interview with Noisey. Besides disclosing that the song is definitely not about her ex, Wilmer Valderrama, she explained her inspiration for "Ruin The Friendship" came from being "frustrated with a certain situation." Lovato said,

And I was like, 'You know what, I'm just going to write about it.' And so I did, and sent [the songs] to that person, and that was... interesting. Any time you send a song about the person, to the person, it's ballsy. It's like, 'Hey! Here's my feelings for you!' … They knew [about my feelings], but neither of us had acknowledged [them] before. And then it turned out that person had written a song about me, and we exchanged songs.

I would be beyond flattered if Demi Lovato wrote a song about me. Also, I would LOVE to hear the song written about her by this secret friend.

The fact that the person also wrote a song about Lovato is our second clue. He or she writes songs which leads us to believe they are probably a musician. Hmmm... Jonas still fits the bill. Naturally, this triggered fans even more.

Fans are really looking into the cigar factor. While Nick Jonas is yummy, this is all just speculation at this point. Lovato is very open with her fans, so it wouldn't surprise me if she did eventually reveal who the song is about. She opened up to MTV about the emotion and vulnerability of writing songs that are so personal,

Sometimes you put out music that you just feel like everyone is going to know who it's about. Headlines are going to come out of it, and it's like, when you write a song, you're just being vulnerable, and you're just writing about something that's inspiring you, so all the baggage that comes with it is what I'm kind of nervous about.

I think that everything happens for a reason, and certain emotions are felt at certain points in your life, and you don't always have to explain them to people. So whatever you want to think about it — you go into whatever theories you have — fine. But I know what it's about and who it's about and I'm just going to let it be.

I love Demi and the fact that she can get so real with her fans. I have a feeling "Ruin The Friendship" is going to be about someone less obvious than Nick Jonas, but we'll see. Based on her previously released songs from the album, "Sorry Not Sorry" and "You Don't Do It For Me Anymore," Tell Me You Love Me is going to be Lovato's ultimate power anthem album.

From the track titles, the album sounds like it will be all about break ups, make ups, and that amazing time after healing from a break up when you feel like a badass babe. If you're going through a break up right now, get this album and remember how good the bounce back will feel. Demi is definitely encouraging people to just "do you" and I love her for it.

Below is the entire track list for Lovato's new album, Tell Me You Love Me. Based on the song titles, it's definitely going to have a sexy, sultry vibe.