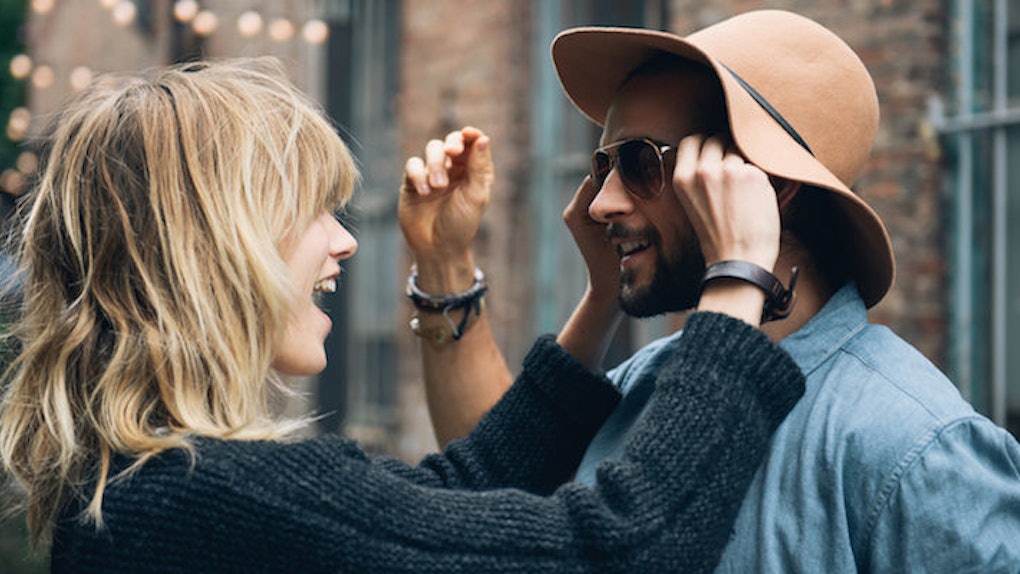 If Your Girlfriend Does Any Of These 7 Things, Never Let Her Go

There's a lot of talk out there about how the modern-day hook-up culture officially ended love as the Boomers and Gen X once knew it. But are millennials really less likely to commit, or are people just looking for that one perfect partner and failing because it isn't easy to do? There isn’t a checklist for figuring out whether or not you’re with The One, but there are things to look out for as signs you’re with the right person. And if your significant other does any of these seven things, it’s a good indication it’s meant to be.

Figuring out who you’re attracted to and what you’re looking for in a relationship is what dating is all about, and knowing what you want — and what you’re willing to compromise on — makes it so much easier to spot the right person when they come into your life. There are plenty of factors to keep in mind when you're thinking about entering into a long-term relationship, but these few in particular are signs you're on the same page with your SO and ready to take the next step. And who knows, these qualities you may find in a partner might make you want to put a ring on it, stat.

1. They get excited about seeing you again.

Life is too short to spend it with someone you aren’t excited about coming home to. This person envisions their future with you, whether it’s as their date to their friend’s upcoming wedding or even going so far as to think about marriage and children together. Matchmaker and dating expert Stef Safran of Stef and the City previously told Elite Daily, “If you see the future with excitement, that's definitely on the right track to marriage.” If your SO can’t bother to text you back or keeps flaking on plans, however, that’s a red flag.

2. They communicate instead of fighting.

Everyone has a temper, and some people have shorter fuses than others. If your significant other makes an effort to communicate and listen instead of turning a disagreement into a screaming match, it’s a good sign of a healthy relationship. Julie Spira, online dating expert and award-winning dating coach, previously told Elite Daily, "Everyone wants to be heard and understood, so it’s also more important to be a good listener than to monopolize every conversation. Just saying, 'I hear you, and appreciate that you’re sharing your thoughts and feelings with me' will improve your communication skills." It means a lot to have a relationship where you both value solving your problems together over “winning” an argument.

3. Different interests isn’t a dealbreaker for them.

You love The Politician and all they want to watch is The Bachelor. You hate live music and they might as well move into Madison Square Garden. But for your significant other, that’s completely OK — in fact, your different interests aren’t just inevitable — they’re interesting. Anita A. Chlipala, licensed marriage and family therapist, previously told Elite Daily, “I frequently see couples tear their relationship apart by doing things such as wanting their partner to change, by conveying to their partner that they are wrong, and criticizing and even being condescending toward their partner about their differences. If you find that you can work through these differences with respect and find win-win compromises, that’s a healthy sign.”

If you have a partner who’s interested in different things than you are, it’s an opportunity to spice up your relationship even more. Bestselling author and relationship expert, Susan Winter, previously told Elite Daily, “Having a replica of ourselves can quickly become a bore. There’s no expansion, and certainly no surprises.” Winter says having an SO with differing interests and hobbies “allows you to function way outside your norm and discover things you wouldn’t have experienced before.”

4. They support you living your life separately from them.

People need friendships for all different reasons, and there’s no need to break those friendships when you’re in a serious relationship. Kali Rogers, founder of Blush Online Life Coaching, previously told Elite Daily, “Your personality is complex and you will always need support from different individuals in different situations.” If you have a partner who respects the time you spend with your friends and likes to hang out with their own friends as well, that is a person who values friendship — not just their own, but yours, too.

The values you have make up a huge part of who you are. Fran Greene, relationship coach and author of The Secret Rules of Flirting and Dating Again with Courage and Confidence, previously told Elite Daily, “Although values can be tweaked, they cannot be changed. They define who you are.”

These values are super important when it comes to finding a long-term partner. Lesli Doares, couples consultant and marriage coach at Foundations Coaching, previously told Elite Daily, “[Your SO] has all of the attributes you require in a partner and none of the 'deal breakers.’” Attributes you require could be things like love for family and friends, being in nature, or a sense of humor. Deal breakers could include disrespecting others and not wanting to have a family. If you and your SO have a lot of the same values, it’s a great sign for your relationship.

6. They trust you, and you trust them.

Trust can be a hard thing to build, and it's straight up magical to create it with the person you love and want to be committed to. Dr. Venus Nicolino, Ph.D, otherwise known as Dr. V from the hit show Marriage Boot Camp: Reality Stars, previously told Elite Daily that in a good relationship, "You share a rock solid, mutual understanding that no matter what, both of you will stay in the game.”

Love can be the ultimate source of motivation. Online dating coach Andi Forness previously told Elite Daily the one who's "perfect for you is the person that inspires you to be the best version of yourself at any given stage." There’s nothing better than feeling supported when you get that new job offer, or when you decide to start a new side hustle, like writing your own book. Your SO should make you feel like you can do anything.

Stef Safran of Stef and the City, matchmaker and dating expert

Fran Greene, relationship coach and author of The Secret Rules of Flirting and Dating Again with Courage and Confidence

This article was originally published on March 9, 2016