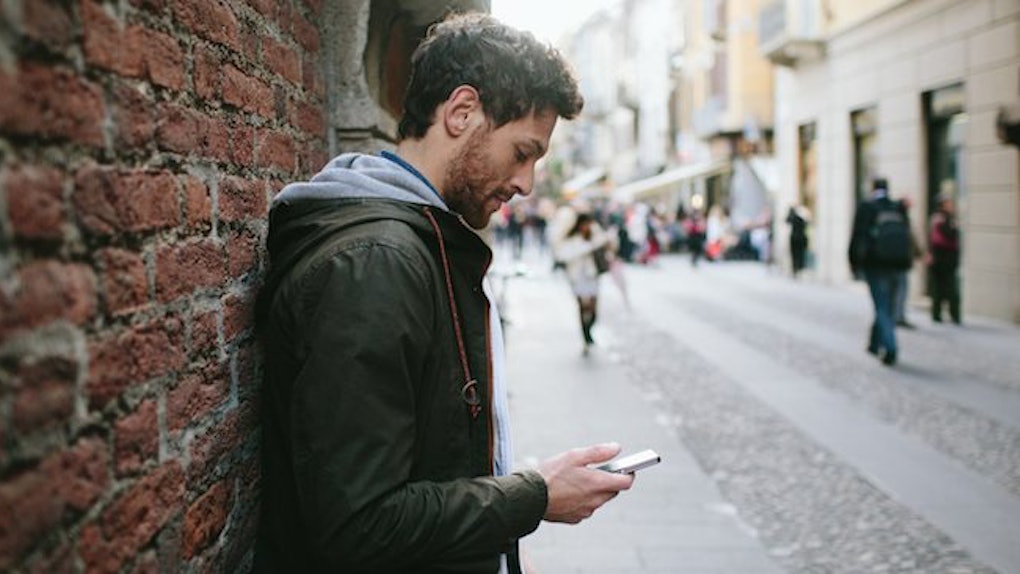 Is He A Player? 5 Ways To Tell If He’s Genuine Or Just Playing You

So you're dating a new guy and totally smitten. He's the full package; he's well-spoken, good-looking, and confident. And feminism be damned — he treats you like the princess that you are. The only problem is, you have a sneaking suspicion that Mr. Perfect might be hiding something... or worse, someone. Which might naturally lead you to wonder: Is he a player?

What exactly defines a player anyway? To get some input, Elite Daily sat down with dating expert and relationship writer Demetrius Figueroa. According to Figueroa, what separates a true player from a single guy exploring his options is one thing — manipulation. "If you're a player, you're playing someone, whether that's telling the people you date that each of them is the only person you're seeing, or convincing someone you're single when you're not," says Figueroa.

Figueroa goes on to note that flirting doesn't necessarily mean he is a player, so don't overreact if he's giving friendly attention to other women. "If a guy is flirty, but is honest about his relationship status, and doesn't pursue anything beyond flirty banter, he's probably just a big flirt," says Figueroa.

But if you suspect the guy you're seeing is going further than the occasional flirtatious exchange, then keep your eyes peeled for these tell-tale signs.

There's nothing quite as sobering as finding out someone you trust isn't being honest — so sobering, in fact, that many of us try our hardest to find a way to justify dishonest behavior in the hopes of protecting the flawless image of someone we've built up in our heads. According to Figueroa, any form of intentional dishonesty, no matter how small, is a major red flag.

The bigger the deceptions, the bigger the warning sign. This lack of truthfulness should also extend to patterns of convenient omissions. Does he spend a lot of time hanging out with 'friends,' none of which he bothers to mention the names of?

It should be noted that being guarded isn't the same as being dishonest. Remember, if you haven't had an exclusivity conversation, then he very well may be seeing other people. Until you've had this conversation, then omission doesn't necessarily mean he's a player, but rather that he's exercising his freedom to explore his options. There is a difference.

I probably don't need to tell you that if a guy has explicitly said he is not looking for a relationship, then please, please believe him. Of course, we've all heard the sasquatch-esque stories of a friend of a friend who convinced a guy who was just booty-calling them to start dating exclusively. But it's rare that these types of dating narratives have a happy ending.

Unfortunately, due to an increase in popularity of unsavory dating practices like breadcrumbing and ghosting, people are being less direct about what they're looking for in order to keep multiple partners on the back-burner. This means it's important to learn to read between the lines.

If the person you've been dating is avoiding taking your relationship to the next level without giving you any valid explanation for why, then there's a chance he's seeing other people and using some form of manipulation to keep his true intentions concealed.

If the guy you're dating avoids being specific about details like what he does in his free time (i.e. what he did last weekend and who with), then this should also be taken into consideration, says Figueroa. You should also be on high alert if the person you're after uses vague language when confronted about the status of your relationship. Does he avoid acknowledging that you're his girlfriend when introducing you to someone?

"If he's [not being specific] about where he's been, who he was with, why he was busy, or anything else like that, that should be a clear sign to you that he's a player," says Figueroa.

4. He Engages In Suspicious Behavior

The rule of thumb I've learned to abide by isn't new: If he's acting like he has something to hide, then chances are he has something to hide. Again, this doesn't mean if he excuses himself once to have a conversation with his ailing grandmother that you should assume he's arranging a booty call. However, if he's regularly acting sus when it comes to his cell phone, then there may be something he's not telling you.

"[If he regularly] seems to avoid talking or texting on his phone near you, especially if he goes as far as entering a different room to check his phone," then this may also be taken as a sign he's a player, says Figueroa. Any behavior that seems to be too private or secretive should be cause for further scrutiny.

In my opinion, it's always imperative to trust your gut, even if you don't have proof he's up to no good. In this case, it never hurts to gently dig a little deeper. An honest guy with nothing to hide won't be put off or dodgy about follow-up questions as long as they are casual and non-accusatory.

5. He Has A Wandering Eye

I hate to break it to you, but both genders notice people they find attractive — sneaking a quick look is totally normal. That being said, if the person you're seeing is constantly gawking at other women in your presence, then this is disrespectful.

Although hounding the person you're dating about subjective behavior like this can get tricky, there's absolutely no reason you need to tolerate someone whose actions are making you feel uncomfortable.

Once you've confirmed that the guy you're dating is exhibiting player-esque behavior, is there anything you can really do about it? Well, yes, but according to Figueroa, how you should respond depends entirely on what you're hoping to get out of the situation.

If you're looking for a monogamous connection with someone who would like to build a serious relationship, the most productive thing you can do when confronting a player is to leave. I don't think asking a player to change is a productive move, so I wouldn't recommend it.

If, however, you are comfortable with a non-monogamous relationship or a short-term arrangement, then Figueroa suggests having a conversation to let them know you "don't particularly care if he's seeing other people or not," but that you would like to request "that he's honest with you."

But be forewarned: Engaging with a player can be a slippery slope. Since guys like this are so withholding, it's all too easy to get caught up in the chase, think you're in love, and wind up curled in the fetal position sobbing like a junkie awaiting their next fix.

Can they change, you ask? Yes, says Figueroa. But not for you:

Players can and sometimes do change, but that change happens when they want to change. No matter how great you are, a player won't change for you; they'll change when they feel the time is right. Getting caught won't make them change, hurting feelings won't make them change. If they ever do change, it will be when they come to a realization on their own. A player can change, but don't hold out hope that you can change a player.

So if all signs are pointing toward player town, it may be a good idea to cut him loose and find someone who's looking for the same things you are.