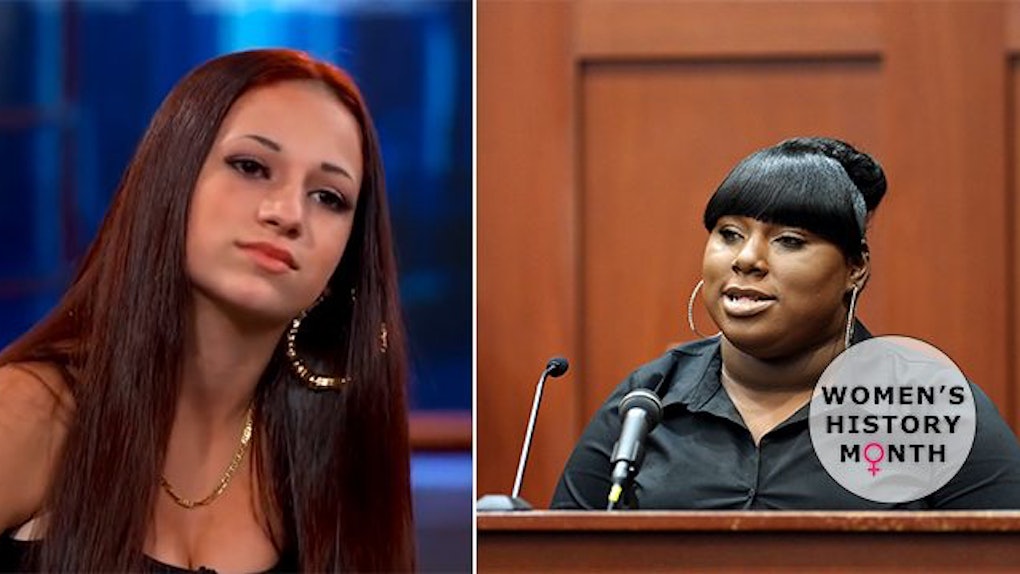 These Black Women Were Punished For Acting Like Danielle Bregoli

I'm not hating on Cash Me Outside girl.

I want every woman and girl to get her, um, cash.

But still, there's a problem here.

For 13-year-old Danielle Bregoli, her now infamous, "Cash me outside. How bow dah?" line from Dr. Phil has garnered her a lot of attention.

Her behavior is not entirely new, but it is being celebrated like it is. This is not to say that black girls are inherently disrespectful to their parents and prone to threatening people.

But it is to say that black girls and women are usually persecuted for having too much attitude, while white girls can co-opt their style and make money from it.

Cash Me Outside girl is currently selling merchandise, and making between $30,000 and $40,000 for appearances. Black women don't have that luxury. They are often dismissed when it comes to loud, aggressive behavior, instead of being rewarded for it, the way Cash Me Outside girl has been.

Here are five black women that you need to remember who paid heavy consequences for having too much attitude.

Rachel Jeantel was Trayvon Martin's friend, and the last to speak with him before he was shot and killed by George Zimmerman in 2011.

The internet ripped into her hair, clothes and speech, as she took the stand to speak on her slain friend.

Rolling her eyes and sucking her teeth at prosecutors, she was seen as too attitudinal and labeled "ghetto." Never mind that she was grieving, or that she had the right to have an attitude.

Later, Jeantel even told CNN that she blamed herself for Zimmerman's acquittal.

Tiffany Richardson will always be remembered as the black girl who got yelled at by Tyra Banks on Season 3 of "America's Next Top Model."

It's one of reality television's most iconic scenes ever. Richardson was known for her sharp tongue, arguing with the other contestants and getting into a drink-slinging altercation (that she didn't start, btw) at a bar.

Richardson was kicked off the show for her attitude, and was brought back on season 4, only to be kicked off again.

People blamed her for her failed modeling career, but the former model suggests that the show was more degrading than we all may have realized.

We'd get picked apart for like 15, 20 minutes each. Sometimes they'd be going at it, like roasting the fuck out of us. Back to back to back.

She also shared her thoughts on Tyra:

You would think that if you cared that much, you would've been there more. I didn't think she cared. I don't think she gave a fuck about none of us, except for the ones who made it big. But hey, it is what it is.

An officer threw Shakara across a classroom for refusing to put her phone away and exit the room.

The student, whose last name has not been released to the media, was being insubordinate and probably deserved detention or something of the sort. But she did not deserve to be physically assaulted and embarrassed in front of her students and teachers.

Dajerria Becton was thrown to the ground in a bathing suit and pinned with a grown male officer's knee on her back, all while trying to leave a pool party in McKinney, Texas.

Her offense? Mouthing off to an officer while walking across the grass.

Sandra Bland's 30th birthday was February 7, but she missed that one because she failed to put on a turn signal. When she was pulled over by police officers, she also asked why she had to put her cigarette out during a traffic stop.

She was pulled from her car, thrown to the ground and arrested. Three days later, she was found dead in her cell, having committed suicide.

An Instagram page called, "Fuck Sandra Bland" was created to poke fun at her death (all photos have since been removed).

Cash Me Outside girl has a past more checkered than all of the black women on this list.

She has been in fights with her mother, fights on airplanes and had the police called to her Florida home 51 times in 2016.

Yet she's been rewarded with business deals and security teams, while black women are required to accept responsibility for situations they controlled and situations they did not.

Rolling eyes, challenging authority figures, talking too slick all seem to be grounds for shunning and physically assaulting black women. And sometimes, they even serve as justification for our deaths.

Feel free to enjoy Cash Me Outside girl as much as you like, but I challenge you to start granting black women the same grace and safety.

Now how about that?