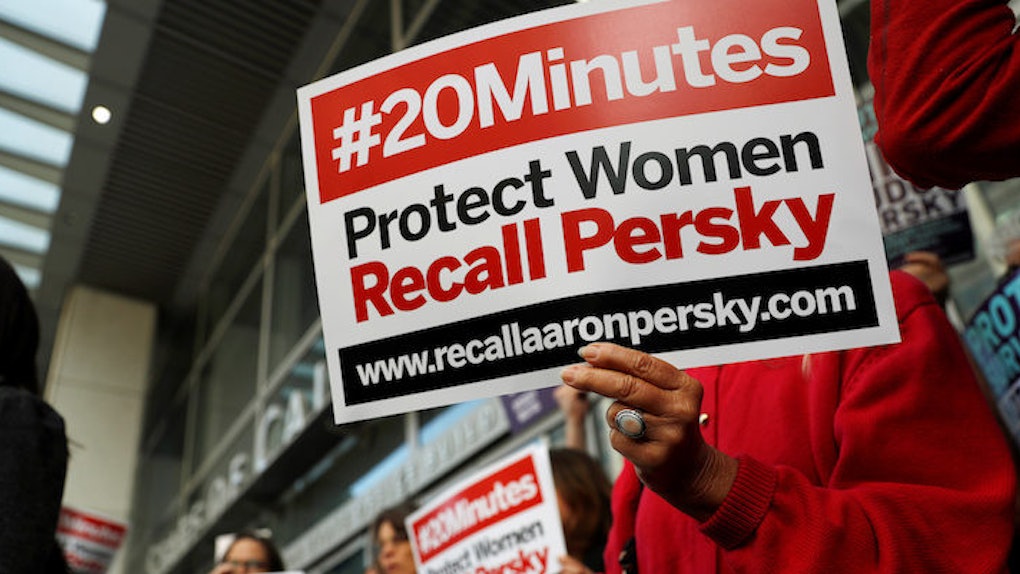 When I found out that 20-year-old Brock Turner, former Stanford University student and swimmer, was sentenced to six months in jail after he sexually assaulted an unconscious young woman on The Stanford University campus, I was left feeling heartbroken, confused and fearful of the value the judicial system places on my safety as a woman.

Judge Aaron Persky claims that he sentenced Turner to a mere six months in county jail (he could have given him up to 14 years) because of his "clean criminal record." He also said that a longer sentence would have left a "severe impact" on the college student.

"I think he will not be a danger to others," Persky told CNN after the sentencing.

"I think he will not be of danger to others." "Severe impact on him."

I couldn't process anything but those two simples sentences from Persky, a person whose job is to protect the masses from harm.

The message was loud and clear: A man who sexually assaults an unconscious woman is not to be feared. Rape and sexual assault are just part of (using Turner's words here) "party culture."

A man who sexually assaults a woman doesn't need to be really, truly punished for the trauma he inflicted on her, especially if he has white skin, goes to an elite university and plays sports.

And to really drive the point home of how not big of a deal sexual assaulting women is, Turner was released from jail after serving only three months of his six-month sentence for "Good behavior."

I wasn't the only one left reeling by the devastating outcome of the Brock Turner case. The internet, students, women, rape survivors, survivors of sexual assault, and good men alike, were left blown away by Judge Persky's absurd sentencing.

And now Judge Persky has been officially cleared of misconduct in the trial, as the California Commission on Judicial Performance said they found insufficient evidence that he had any bias towards Turner or against women.

The commission has concluded that there is not clear and convincing evidence of bias, abuse of authority, or other basis to conclude that Judge Persky engaged in judicial misconduct warranting discipline.

This is exactly why women don't come forward about their rape and sexual assault, people.

It's because of cases like this. It's because judges are not held accountable when they give clear preferential treatment to white men that assault women.

It's because sexual violence is not taken seriously by our justice system, and a man who attacks an unconscious woman get's three months in jail, while a $31 pot deal can send a woman to prison for 12 years.

It's also from other influential men in the media, like Piers Morgan, who questioned Lady Gaga and Madonna, two famous women who have recently shared their stories of being raped and suffering PTSD because of the attacks.

Morgan tweeted last week that celebrities are just being trendy by discussing their assaults. And the PTSD that many rape survivors are left with? Nope, that's not real.

According to straight male Piers Morgan only people who go to war have PTSD.

So according to men like, Piers Morgan, after you've been raped, you should have the wherewithal to immediately come forward. Otherwise, who knows if your story is even true?

When you have an entire culture that actively denies you of your experience or accuses you of using your story to elevate your success or popularity, it's not safe for women to come forward.

Being sexually assaulted is a devastating, life-changing trauma on its own. But then to have the validity of your story denied — whether it be by the law, a public figure, students in your school or other women — that's just another devastating trauma to add to an already traumatic experience.