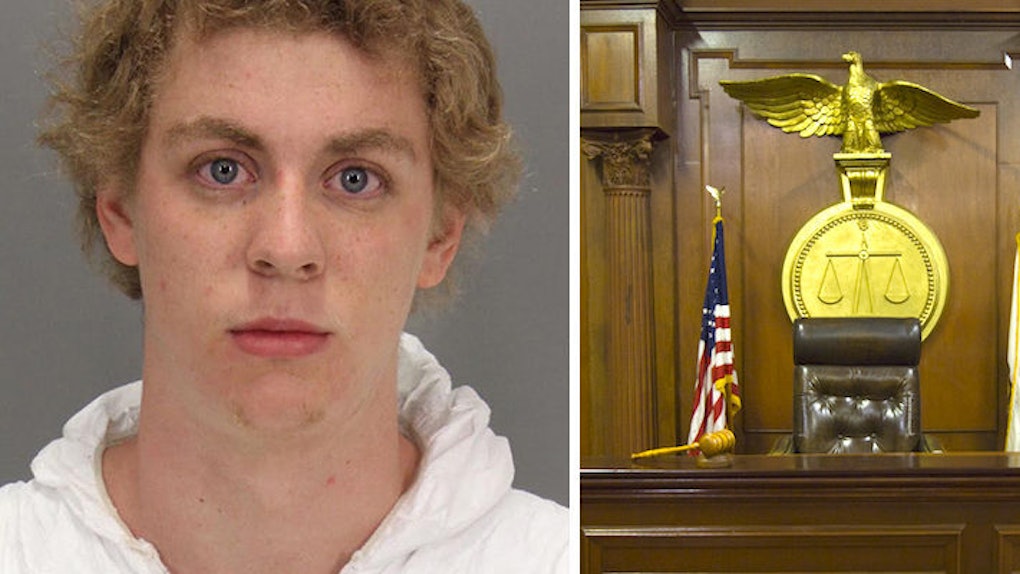 Judge Aaron Persky came under severe public scrutiny after he gave Brock Turner only six months of prison time for three felony counts of sexual assault. He chose, instead, to focus on probation, despite the seriousness and relative straightforwardness of the crime.

Now, The Guardian released the judges full statement, which provides both a very telling and troubling insight into how this judge, and many of our judges, approach the sentencing of privileged defendants.

The thing is, when you just hear the bare bones of the circumstance (Brock Turner was found raping an unconscious girl, ran away, lied about it, was found guilty and still only got six months in jail) you don't quite understand exactly how insidious and masked the logic invoked by the justice system and its representatives is.

In order to really witness how and why a man could (in, at least, the appearance of good conscience) hand down a sentence like this (and why courts continue to do so in rape cases) you have to look at the exact language they use to recast and distort how fucked up what they are actually saying is.

Persky starts his statement by reading from a letter the victim wrote her assailant and read aloud in court. It's so upsetting to hear her letter -- which is as powerful as it is heartbreaking -- invoked by a man arguing for leniency for the very person who attacked her. But it serves to make him seem like he has her interests in mind here, which, considering his following sentence, could not be further from the truth.

'You should have never done this to me. Secondly, you should never have made me fight so long to tell you you should never have done this to me. But here we are. The damage is done. No one can undo it. And now we both have a choice. We can let this destroy us. I can remain angry and hurt, and you can be in denial. Or we can face it head on: I accept the pain; you accept the punishment; and we move on.' So, as she writes, the damage is done.

"The damage is done," Persky proudly echoed, missing the point so tremendously, there is no world where he isn't doing it on purpose.

Persky, throughout his statement, tries to stick to the stipulations of one "Rule 4.414," which provides a checklist of sorts for whether or not a defendant should be given a probationary sentence.

In the end, Pesky builds his argument for probation and a short prison sentence upon four basic pillars, derived from this rule 4.414. His reasonings behind each of these criteria end up being favorable to Brock and is a perfect example of how privilege can distort and subvert rational legal arguments.

1. Brock Turner has no prior criminal record.

There's no criminal convictions. The People have presented some evidence of, first of all, the pending minor-in-possession case, which I have considered, as well as communications involving recreational drug use, even a video showing recreational drug use. But I don't – on balance, I don't find that enough to negate the absence of any criminal convictions.

Translation: Because Brock was never caught doing any of the illegal stuff we now know, for a fact, he has done, those illegal actions are irrelevant to this law, which favors people without convictions. Great.

This part of his argument is particularly telling.

Persky brings up Brock was intoxicated early on in the statement, and the number of verbal gymnastics he performs in order to emphasize this fact is relevant while also claiming he is not focused on it is impressive.

I think there is – some weight should be given to the fact that a defendant who is, albeit voluntarily, intoxicated versus a defendant who commits an assault with intent to commit rape, a completely sober defendant, there is less moral culpability attached to the defendant who is legally intoxicated. That's as a comparative measure. But I don't attach very much weight to that.

And later, at the very conclusion of his statement, he returns to it — further emphasizing how much of a mitigating factor this is to him. This time, his verbal gymnastics get a perfect 10 from all judges.

I have also considered the fact that he was legally intoxicated at the time of the incident. Pursuant to the evidence at trial, this does affect judgment. And as I indicated previously, it's not an – and, I think, as [victim] wrote – it's not on excuse. But it is a factor. And I think it is a factor that, when trying to assess moral culpability in this situation, is mitigating.

3. There was "collateral consequence" -- basically, prison would be hard for Brock.

This one is especially horrible. Here, Persky judges "the adverse collateral consequences on the defendant's life resulting from the felony conviction," explaining "those are severe."

In explaining how severe the "collateral consequence" would be for him, Persky loops in all the character witnesses the defense brought forth.

As Persky puts it,

The character letters suggest that up to this point he complied with social and legal norms sort of above and beyond what normal law-abiding people do.

Many of these character witness statements we've reported already.

But let me remind you one of these letters was from Brock's father who devoted seven out of 17 sentences to describing what Brock does and does not like eating anymore, and used the other 10 sentences to blame alcohol and sexual promiscuity, calling the forced penetration of an unconscious, half-naked woman behind a dumpster simply “20 minutes of action."

The judge, in this statement, brings up one character letter in particular, though -- his high school friend Leslie Rasmussen.

He read part of her statement aloud, saying,

'If I had to choose one kid I graduated with to be in the position Brock is, it would never have been him. I could name off five others that I wouldn't be surprised about.' And so, to me, that just rings true as to – it sort of corroborates the evidence of his character up until the night of this incident, which has been positive.

Let me also remind you this is the same woman who wrote this sentence, just paragraphs later:

This is completely different from a woman getting kidnapped and raped as she is walking to her car in a parking lot. That is a rapist. These are not rapists. These are idiot boys and girls having too much to drink and not being aware of their surroundings and having clouded judgement. But where do we draw the line and stop worrying about being politically correct every second of the day and see that rape on campuses aren't always because people are rapist.

Yeah, this is the statement that "just rings true" to this judge. I mean, you can't get any more straightforward.

What he means here is because Brock Turner was raised in highly privileged circumstances, the consequence of prison time will be more severe.

This, of course, implies another person from a lower standing, or someone who, I don't know, can't swim as well, would suffer far less by going to prison because he or she would have less distance to fall.

This statement is disturbingly revealing of just how integral privilege (whether it's wealth, race, sexual orientation or gender) is stitched into the thinking and logic of many of our judicial officials. I find it hard to believe this judge would consider it as severe if the defendant in a case like this was a black person from the lower class.

As it stands, a third of black men will serve time in this country. Many of those men have children they aren't seeing, and yet, that impact is often ignored in favor of “good” (white) kids from “good” (white, rich) families who can swim through water really fast.

This last one, that Brock expressed remorse, just boggles the mind. Persky's argument here is, again, so nonsensical, there is little chance he isn't being dumb on purpose here.

Essentially arguing with the victim on whether or not Brock showed remorse, the judge explained,

Mr. Turner came before us today and said he was genuinely sorry for all the pain that he has caused to [victim] and her family. And I think that is a genuine feeling of remorse. [The victim] has stated that he hasn't really taken responsibility for his conduct. And I think at one point she basically wrote or said that 'He – he just doesn't get it.' And so you have Mr. Turner expressing remorse, which I think, subjectively, is genuine, and [the victim] not seeing that as a genuine expression of remorse because he never says, 'I did this. I knew how drunk you were. I knew how out of it you were, and I did it anyway.'

I'm not convinced that his lack of complete acquiescence to the verdict should count against him with respect to an expression of remorse because I do find that his remorse is genuine.

OK, the literal definition of remorse requires you acknowledge, first and foremost, what it is you did.

I can't believe this needs to be explained to a judge, but a child saying, "I'm sorry a flying stone hit you in the back of the head" is not expressing remorse. An expression of remorse is, “I'm sorry I threw a rock at the back of your head.”

I don't mean to make light of this with my choice of example, but the fact of the matter is this man made this job his life, and he has fewer instincts for justice than any parent who ever lived.

But then, showing his hand briefly, Persky straight out admits,

I mean, I take him at his word that, subjectively, that's his version of events.

OK, let me get this right. So, this judge has now explained Brock is remorseful, except that he doesn't accept what happened, because he actually sees it differently because he was drunk (yeah, that again). Oh, also, the judge believes Brock is actually being truthful about his version of events, but he's still, somehow, remorseful for a crime he doesn't believe happened.

If that sentence doesn't make sense to you, that's because the argument is gobblegook.

You have to have the IQ of a drunk ferret to not realize Brock knows he was lying about what happened that night — that, or you have such bad patriarchal, rape-culture-encouraged tunnel vision, you can't bring yourself to punish a man for doing something you, at a fundamental level, forgive.

In the end, Judge Persky sums up the fragility and weakness of our justice system in his own words, stating,

The trial is a search for the truth. It's an imperfect process. And there's ambiguity at each stage of the proceedings.

Yes, our justice system IS flawed. It IS imperfect. That's why we need smart, compassionate officials more than ever — officials who are not dazzled into feigning unintelligence by straight, white, male, upper-class privilege.

The heart of the problem in this case, and in rape cases all over this country, is tragically simple: This judge doesn't understand the seriousness of rape trauma at all, but he does understand it is unfortunate a kid from a good family is now considered a criminal and can't be a competitive swimmer anymore.

There are no two ways about it. This judge privileged Brock's pain over that of the victim because he could only relate to one of them.