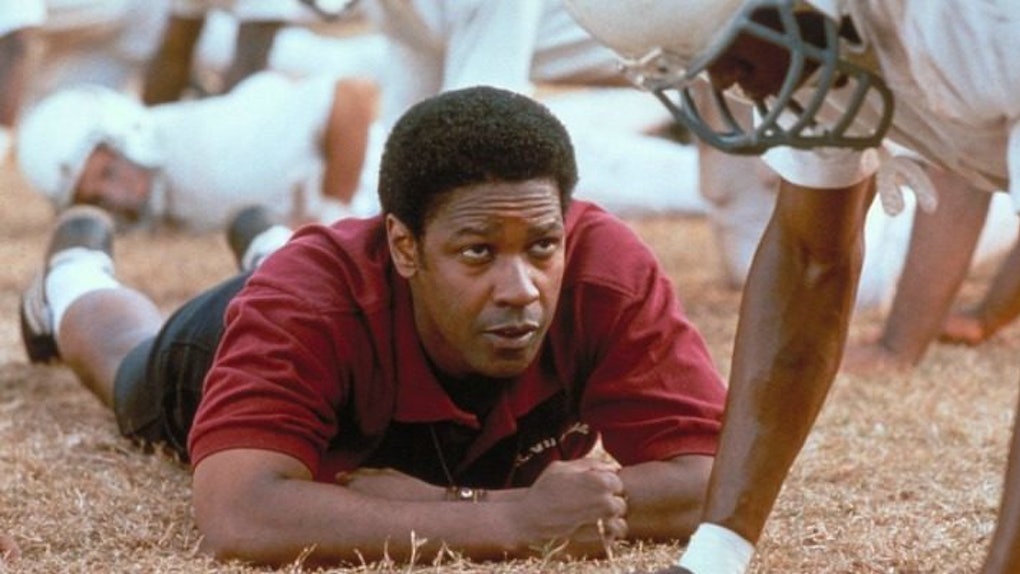 7 Real-Life Lessons We Learned From 'Remember The Titans'

With the 88th Academy Awards officially in the rearview, industry insiders and moviegoers alike are already looking forward to the next slate of potential award-worthy films.

But with all-star performances and time-tested movies on people's minds, before we all move forward, we have to look back.

We have to shine the spotlight -- yes, that's a cheap Oscars reference -- on a movie that's as relevant now as it was when it was released in 2000.

In fact, in light of this country's current racially charged climate, perhaps it's more significant than ever.

On the surface, Boaz Yakin's "Remember the Titans" is a movie about football and race. But, if you think those are the only two themes prevalent in the film, then you clearly didn't pay enough attention to Coach Herman Boone.

Don't worry, though, because I've been inspired by Leo, Chris Rock, Jacob Tremblay and others to outline seven real-life lessons we learned from "Remember the Titans," whether we realize we learned them or not.

"Change" is key to success.

When the Titans head to training camp, they're a team divided. It's black versus white; new versus old; change versus history.

In order for Denzel Washington's Coach Boone to unify all of his players and coaches and develop a great football team, he has to change the way the team practices on the field as well as how they live and think off of it.

In my experience, change is one of the hardest inevitabilities life throws at us. Even when a great opportunity is clear to everyone around you, it can be paralyzing for you to take that first step.

But, being able to adapt is necessary for survival, and if you can't get used to change, you'll never make it through life.

"Take a lesson from the dead."

Fed up with his players' inability to see past their differences and come together as a team, Coach Boone takes his coaches and players on a 3 am run through rural Pennsylvania. Eventually, the Titans end up at the site of the Battle of Gettysburg, where Boone reminds them all to "take a lesson from the dead."

If the Titans keep fighting each other, they're never going to beat an opponent.

You can take this lesson literally or not, but the message is the same. In order to make good decisions and navigate through life, you have to look to the ones who came before you.

No matter how dire your situation seems, someone has probably been in your shoes before. Be a student of the game. Don't make the same mistakes others have.

I've been a leader and a follower at various points in my life and if there's one thing I've learned, it's that the performances of many stems from the actions and words of a few.

Along the way, you're going to be led by teachers, coaches and bosses; some are great, and others are sh*tty.

But when you find yourself in the driver's seat, remember the different types of leaders you've followed and learned from. The best way to get a message across isn't by screaming it, it's by doing it.

If team captain Gerry Bertier didn't hold white players, namely his best friend, Ray, accountable for a lackluster effort, then he never would've gotten Julius Campbell on board with helping unite the team.

This may seem fairly obvious, however, I can't help but feel most people don't leave it all out on the field by the time the final whistle blows. We all get so few opportunities for advancement in life, and if we don't take and make the most of them, we're undoubtedly going to live to regret it.

You may not always get the results you desire, but if you make sure no one can doubt your effort at the end, more times than not things are going to work in your favor.

Whether you're playing defense against a racist high school football coach or going for your end-of-quarter goals, the principles are the same.

We all have a Ronnie Bass inside of us.

Titans quarterback Ronnie Bass didn't think he was ready to take over as quarterback, but after a few words from Coach Boone, he stepped up when his team needed him most.

We've all been in situations where we didn't think we could muster the strength to do what was required of us.

I wasn't ready... but they needed me.

You may not think you can make a lateral pitch on an option, or shoulder the responsibilities of family and co-workers, but you can.

Gerry Bertier's full metamorphosis from stubborn star to team leader occurs when he speaks to Coach Boone and decides the team is better off without Ray Budds.

When you have toxic people in your life, the only real option is to cut them loose. If you don't, you're going to end up hurt or in trouble, one way or the other.

I had a friend once, someone I would've done anything for.

It was the kind of friendship where you can't really explain how the feeling of loyalty gets so great, but it just is. Eventually, though, I learned the hard way we didn't share the same definition of the word loyalty.

As cliche as it might sound, there really is no mountain too high to climb in life.

The limitations we all place on our capabilities and the fears we let control us are just that: man-made excuses for not shooting for the stars.

If the Titans could tackle discrimination, adversity and opposing football teams, you can chase down your dreams and go all in to make them realities.

Sometimes, you need to just flip the script and pull a "fake 23 blast with a backside George reverse, like your life depended upon it."