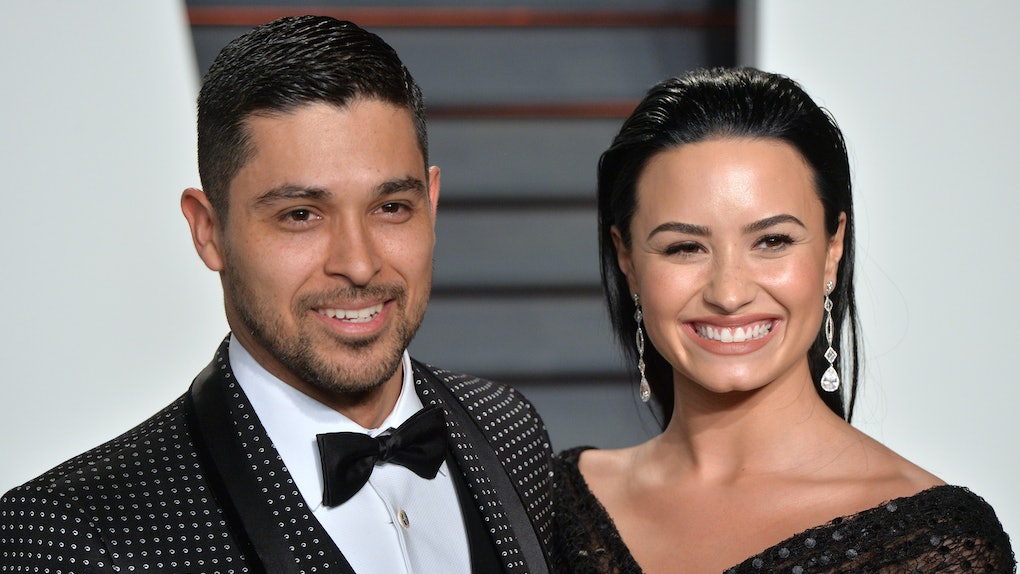 When Demi Lovato and Wilmer Valderrama called it quits in 2016, my heart broke. They had been together for six years and always seemed genuinely happy together, which made them such an easy couple to root for. Though the couple hasn't publicly talked about getting back together, they've insisted time and time again that they're still very much in each other's lives and the best of friends. (Thank the gods.) Wilmer Valderrama and Demi Lovato's Instagram live together showed the world that they are, in fact, still on absolutely great terms. And I am here for it!

Their entire Monday, April 29 conversation on Instagram Live was friendly, fun, and if I do say so myself, a little flirty. Valderrama and Lovato started off by playfully making fun of a signed autographed picture of him and then joked about a meme made about the two of them. After laughing about that, Valderrama told Lovato, "You look awesome, girl!" while making a silly face that Lovato quickly called him out on. "So do you! What is that face?" she asked him. And he replied, "I don't know! It's excitement. I'm just excited."

Valderrama continued, "That face looks like I hide in the background of 'Who Let The Dogs Out?'" Then, they proceeded to sing the chorus of the song together and laughed some more. I'm telling you, it was so sweet. He said, "I hope you're having an amazing time. Hit me when you get back, when do you get back?" "I get back tonight, I'm on my way home," Lovato replied. "Oh, you're on your way back, cool. Well, I'm done with work on Wednesday, so holla at your boy." "OK, I will," she said. And to top it all off! Valderrama said goodbye in the sweetest way, saying, "See you, angel. Love you!" I'm not crying! You're crying! Watch the whole thing here.

Their adorable conversation on Instagram live brought back nothing but happy memories of a time when Valderrama and Lovato seemed as head over heels for each other as humanly possible. When their relationship sadly came to an end, they released a joint statement to tell their fans. "After almost 6 loving and wonderful years together, we have decided to end our relationship," the statement read. "This was an incredibly difficult decision for both of us, but we have realized more than anything that we are better as best friends. We will always be supportive of one another," they continued. "Thank you to everyone who has offered us kindness and support over the years. With only love, Wilmer & Demi." It was the end of an era, you guys.

A source reportedly told PEOPLE in February 2018 that Valderrama and Lovato haven't completely shutdown the idea of getting back together at some point in the future, which, hello, would literally make my entire existence. Elite Daily reached out to both Valderrama and Lovato's teams for confirmation of these reports but did not hear back by the time of publication. "They’re super, super close and have a crazy love for each other," the source said. "They’re extremely close friends, but there’s always potential they could give a romantic relationship another try." And if that's really the case, catch me over-analyzing every single joint Valderrama-Lovato appearance and subtle post indicating any possibility two have may have rekindled their love. I just need it, OK?!