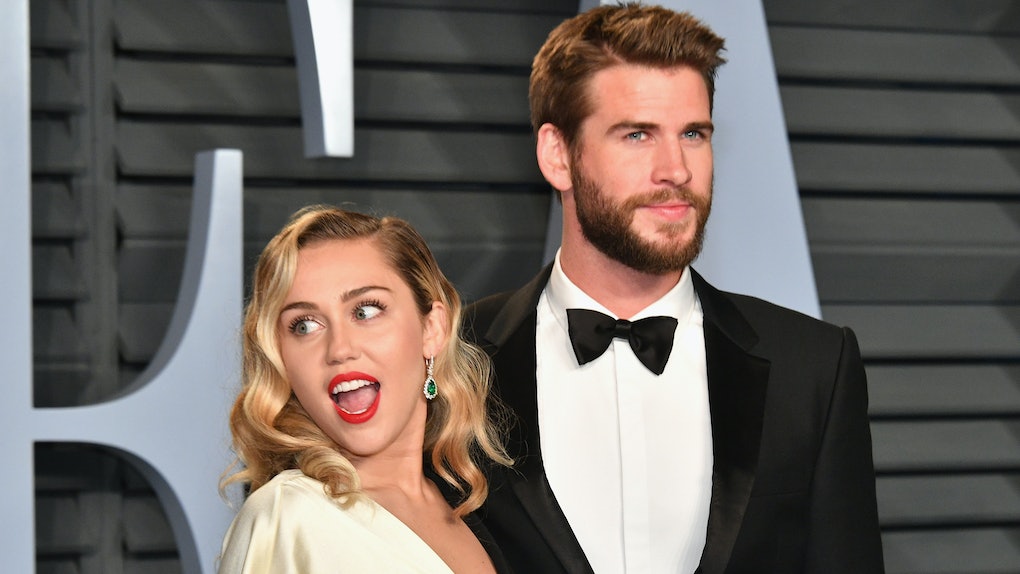 Will Miley Cyrus & Liam Hemsworth Have Kids? They May Have Family In Mind

Must be loveeee on the brain! And babies. All the babies. No, Miley Cyrus isn't pregnant, but now that she and Liam Hemsworth are officially spouses, word on the street is they're starting to think about what they want the future of their family to look like. So will Miley Cyrus and Liam Hemsworth have kids? Let's freaking hope so! The world needs the beautiful babies those two would produce. But also, if that's not what they want then that's cool, too. We don't need any heteronormative obligations guilting people into things in 2019! But according to a source close to the couple, babies are possibly in the plan for Miam. Liley? Miliam? What is their couple name?! I'll get back to you on this with better ideas shortly. Elite Daily reached out to Cyrus' team for comment on this report, but did not hear back by the time of publication.

A source told Us Weekly that babies are on the mind for the two eventually.

“Miley is not pregnant currently but does want to have a family with Liam," the source told the outlet. "Miley and Liam say they felt married before their actual ceremony. Miley is so happy with her life right now. She’s finishing up recording her next album and she and Liam couldn’t be happier.”

The source also revealed that the couple, who frequently said they weren't in a rush to get married after getting back together in 2016, were inspired to tie the knot after seeing how well they worked together in the wake of tragedy.

The source said they “decided to get married after seeing how well they worked together after the fires in Malibu." They continued, “They didn’t want to rush, but after going through the trauma together, they became closer than ever.” Um, that's heckin' beautiful.

Marriage apparently wasn't a priority for the two, but when Hemsworth saved their animals before their Malibu home was destroyed in the California wildfires in November 2018, Cyrus was like, "Yup, I'm marrying the sh*t out of you." She also started calling him her "survival partner" as a result.

“Liam caring for animals and helping others during the Malibu fire really sealed the deal," the source revealed to the outlet. Not long after they got married in December 2018, pregnancy rumors started flying.

Daily Mail theorized that Cyrus was pregnant based on a photo of the singer, but she tweeted back at the claim completely denying it.

"I’m not 'Egg-xpecting' but it’s 'Egg-celent' to hear everyone is so ' Happy For Us,' she said in the tweet. "We’re happy for us too! 'Egg-cited' for this next chapter in our lives.... Now , can everyone leave me alone and go back to staring at an egg." (She's trolling the egg that beat Kylie Jenner's Instagram record, btw.)

So, no babies for Miley and Liam just yet, but if Hemsworth goes around saving anybody else from disasters, Cyrus very well may end up pregnant. I mean, can any of us blame her? The answer to that is a big, fat hell no.

More like this
I Tried Singing While Running Like Miley Cyrus & OMG, My Lungs
By Rachel Varina
Are Demi Lovato & Noah Cyrus Dating? They're Reportedly "Hanging Out"
By Joyann Jeffrey
Who Has Noah Cyrus Dated? Her Relationship History Is So Dramatic
By Corinne Sullivan
Stay up to date