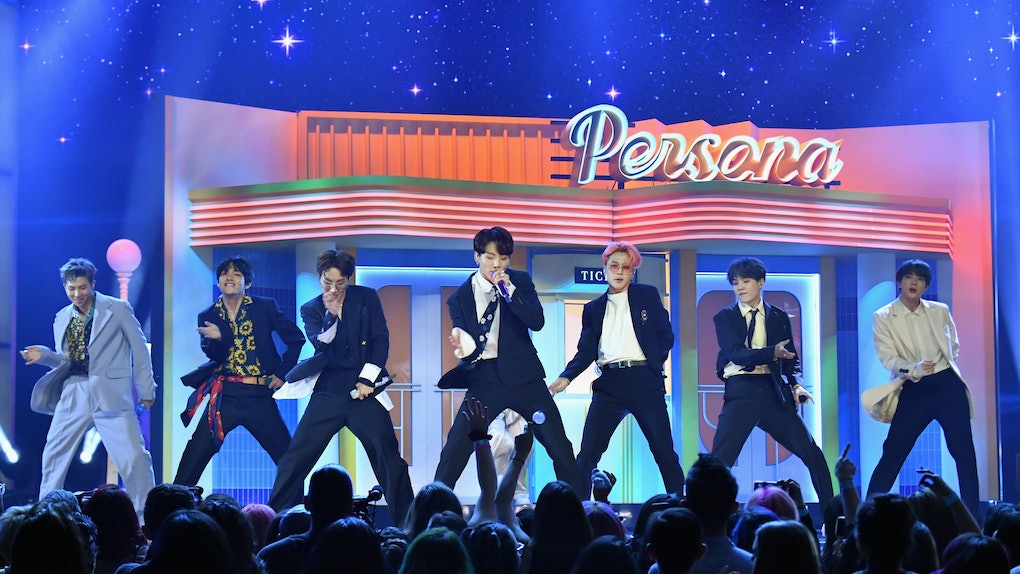 Will BTS Perform At The 2020 BBMAs? Fans Think They'll Light It Up Like Dynamite

The 2020 Billboard Music Awards is just a few weeks away, and so far, huge stars like Post Malone, Bad Bunny, and Alicia Keys are confirmed to hit the stage. The lineup is already stacked, but the question everybody's been asking is whether BTS will perform at the 2020 BBMAs as well. Fans have a few theories about the group's rumored appearance.

Viewers can catch this year's Billboard Music Awards on Wednesday, Oct. 14 at 8 p.m. ET on NBC. The award show was originally supposed to air live from Las Vegas on April 29, but due to the coronavirus pandemic, it was postponed. Billboard has yet to announce the event's format, so there's currently a lot of mystery surrounding the ceremony. However, since the Emmys, VMAs, and BET Awards included a mix of live and pre-recorded content, it's safe to assume the BBMAs will do something similar.

From the start, ARMYs hoped BTS would join the event's star-studded lineup. In 2018, they delivered their debut BBMAs performance with "Fake Love," and then in 2019, they collaborated on stage with Halsey for "Boy With Luv." Since BTS has performed at the BBMAs for two straight years, fans were crossing their fingers the group wouldn't break their streak in 2020.

As for what song they'll perform, ARMYs had a theory. BTS has been dominating the Billboard charts with "Dynamite" ever since its release on Aug. 21, and they've also been promoting it on the Tonight Show Starring Jimmy Fallon, Today, VMAs, so fans think the BBMAs is next. Plus, if the ceremony is virtual, BTS could easily perform live from Korea. Fans know BTS' Korean performances are on another level since they often get more room to put on larger productions with more dancers than on a typical stage, so they predict their rumored BBMAs performance will be the most epic one yet.

"WE NEED BTS TO PERFORM ON AT THE BBMAS AND IM SAYING FULL PRODUCTION, BOMB ASS SET AND OUTFITS, AND QUALITY CAMERA WORK COME ON LOCALS NEED TO SEE," a fan tweeted.

"guys.. if bts will perform this year at the BBMAs they will do it ONLINE.. from SK.. with their OWN CAMERA WORK .. FINALLY!!!" another wrote.

"If it’s virtual then bts performing black swan, on, dynamite at the bbmas with their own sets and camera work >>>>>>>> let’s get it," some else tweeted.

Well, fans were onto something with their theories, as always! On Oct. 1, it was confirmed on the official Billboard Music Awards Twitter that BTS would continue their yearly performance streak at the 2020 BBMAs. Despite their technical charting release during the nominations period was Map of the Soul: 7 and their single "ON," the boys will be performing "Dynamite" instead, which fans are thrilled about.

The show is going to be LIT.

This article was originally published on Sep. 29, 2020

More like this
These Tweets Comparing SuperM's "We Do" To BTS' "Dynamite" Video Are So Split
By Michele Mendez
The Best Movie Soundtracks Were So Good, They'll Live On Forever
By Brandy Robidoux
Taylor Swift's 'Fearless (Taylor's Version)' Lyric Changes Are Small, But Meaningful
By Michele Mendez
Stay up to date