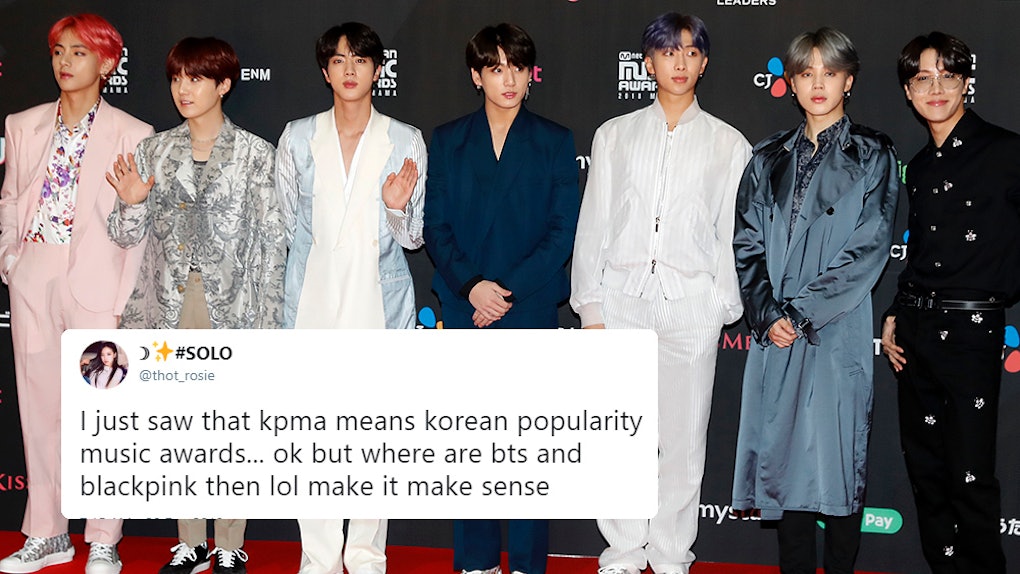 Why Wasn't BTS At The 2018 KPMAs? They've Had A Really Busy Year

Well, the 2018 K-pop awards show circuit pretty much came to a close on Dec. 20 with the very first annual Korea Popular Music Awards. The ceremony went down at the Ilsan KINTEX Center in South Korea and all your K-pop faves were in attendance like Wanna One, NCT 127, Red Velvet, The Boyz, MOMOLAND, PENTAGON, and more. But there was one major K-pop group that was noticeably absent from the festivities and I think we all know who I'm talking about. I'll give you a hint: They're the biggest boy band in the world? Yup, BTS was missing from the k-pop ranks at the KPMAs. But the question is, why wasn't BTS at the 2018 Korea Popular Music Awards?

I get why you're curious. Just like every other major musical award show this year, they were nominated in a ton of categories, including Best Artist, Best Album for Love Yourself: Answer, Best Digital Song for "IDOL," and the Popularity Award. So, why didn't they show up to collect, you ask?

First of all, BTS was never on the lineup to attend or perform at the KPMAs, so they probably respectfully declined the invitation for a host of different reasons — none of which have been disclosed publicly, but also aren't too hard to guess.

For one, the year 2018 has been an exceptionally busy one for Jungkook, Jimin, V, RM, Suga, Jin, and J-Hope. They've been traveling the globe endlessly on their Love Yourself world tour promoting their music and message. These last couple months have been particularly jam-packed with commitments, as the boys showed face at the MBC Plus X Genie Music Awards, Asia Artist Awards, Melon Music Awards, and not one, but two Mnet Asian Music Awards ceremonies — all without missing a beat on the Asian leg of their tour (they performed seven sold-out shows in Japan and Taiwan in between all these award show appearances).

When you take into account the fact that the boys never hit an award show stage with the same performance as the one you saw them perform last (in other words, there's a ton of prep and practice involved with each and every performance), you get an idea of just how grueling their schedule has been. Can you blame them for sitting out this one award show for a much-needed break? I don't think so.

The boys are making the most of this time off. V linked up with his actor friend Park Seo Joon for a pool party. If the boys had attended the KPMAs, V may not have been able to cannonball into Seo Joon's pool. According to a Soompi translation of Seo Joon's caption, even he acknowledged that it was a wonder their schedules lined up, writing, "In order to celebrate a birthday that was a few days ago and another birthday that is in a few days, we spent a short but impactful day together as our schedules somehow lined up although we are busy, and we once again resolved to live our lives to the fullest."

As for Jungkook, he was up to his old tricks yesterday and uploaded a solo karaoke session to Twitter that will absolutely make you melt from his sweet vocals.

Though, it's important to note that the boys will be hitting the stage for the 2018 SBS Gayo Daejun year-end music festival on Christmas (yes, ON CHRISTMAS). There's a chance their performance, or part of it, will be pre-recorded, but let's just say BTS definitely isn't twiddling their thumbs with nothing to do these days.

Anyway, just because the boys didn't physically attend the KPMAs doesn't mean they weren't there in spirit. Fans watching couldn't help noticing how much BTS was mentioned during the ceremony (which makes sense, considering BTS pretty much defines Korea Popular Music these days).

And that's why BTS still took home the bonsang award ("main prize") at the end of the night despite their absence at the ceremony.

But let's be real: The KPMAs were still a BLAST. While BTS was missed, your other faves like Wanna One, Red Velvet, and The Boyz definitely brought it and made the night one to remember.

As for BTS, their SBS Gayo Daejun performance is going to be the best Christmas gift EVER.