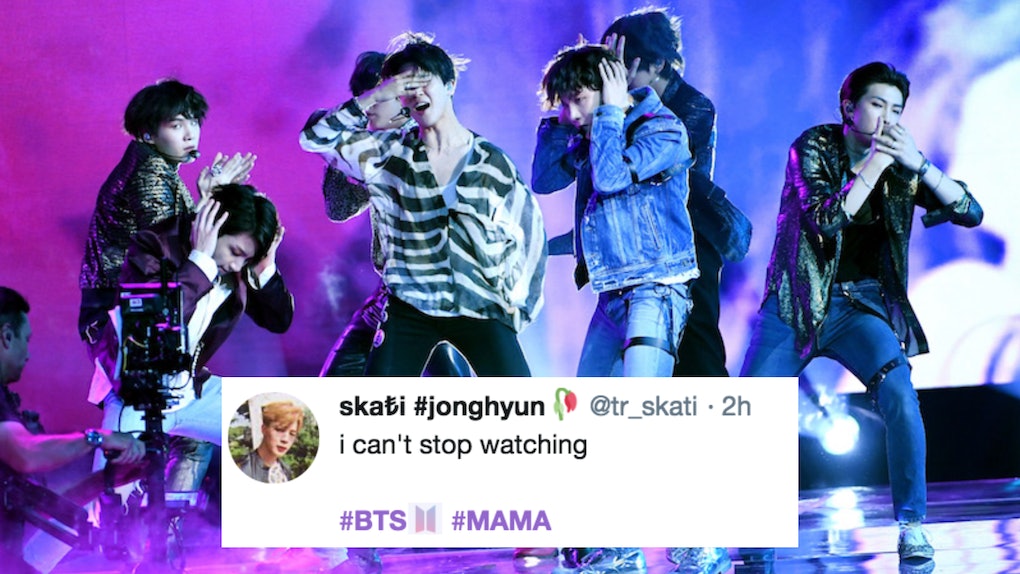 Every time I think BTS has outdone themselves, they go and knock me off my feet. This past year I've had a crash-course lesson in K-pop and this is what I've learned: The group BTS is flawless. Truly. They can do no wrong. Their hits "Fake Love," "Idol," and "DNA" have changed my life (and consequently my husband's life because I've forced him to sit for long periods of time staring at their YouTube videos). Without a doubt, the video of BTS' 2018 MAMAs performance of "Fake Love" is one of the most mind-blowing ones I've seen yet, and it involves one hell of a "Fake Love" remix.

If you guys think this number opened up with a few pyrotechnics, maybe your run-of-the-mill spotlight, or some other "been there, done that" gimmick, think again. BTS' MAMA intro took three full minutes just to get the guys on stage. The show-stopping performance began with a super-stylized video featuring intense graphics and sexy animations. When it was finally time for Jimin, Jungkook, V, RM, Suga, J-Hope, and Jin to take the stage, the crowd was in full-on hysteria.

What came next was nothing short of revolutionary. The gang elevated their choreography to new heights. The stage itself was a wonder to behold. It involved large installations that looked like two hands dangling over center stage, and in the center, massive video screens and lighting units soared above the crowd. Even though the guys were small in comparison to their impressive setting, they seemed giant, too.

To make the show even more fun, BTS delivered their "Fake Love: Rocking Vibe Remix" from Love Yourself: Tear that I am all about. The combination of the rock beat, creative costuming, advanced technology, and complicated lighting made the entire performance one for the history books of pop performances. Plus, Jimin did this wild flip thing that one fan noted on Twitter came from his core strength alone.

It's worth noting, people.

Once they wrapped "Fake Love," the guys took a more playful turn to perform their song "Anpanman." RM emerged on stage in a full-on space suit, and the rest of the boys swapped their flowing black ensembles for metallic puffer jackets. (Way to keep us on our toes, guys! I love it!) I don't know what my favorite part about the whole thing was, but I can tell you that Jimin's new grey hair is up there.

Without further ado, feast your eyes on this.

The performance is particularly exciting for BTS fans because of its pure artistry. The boys' artistic director and branding company HuskyFox did get a nomination for Best Recording Package for the Love Yourself: Tear album, so it makes sense. And even though the boys themselves did not receive any nods, ARMYs are crossing their fingers they still might receive an invite to support HuskyFox or participate in a surprise performance of some kind.

I mean, after this performance, it seems like any award show must be out of their mind to not consider bringing BTS on stage.

Just one last thought — where do they store those massive hands?

More like this
These Tweets About BTS' 'Bang Bang Con 2021' Sum Up The Epic Performance
By Cianna Garrison
Rosé From BLACKPINK's "Gone" Music Video Is The Ultimate Sad-Girl Aesthetic
By Abby Monteil
What Does Taylor Swift's Vault Door Video Mean? Fans Are Decoding It
By Cianna Garrison
Stay up to date