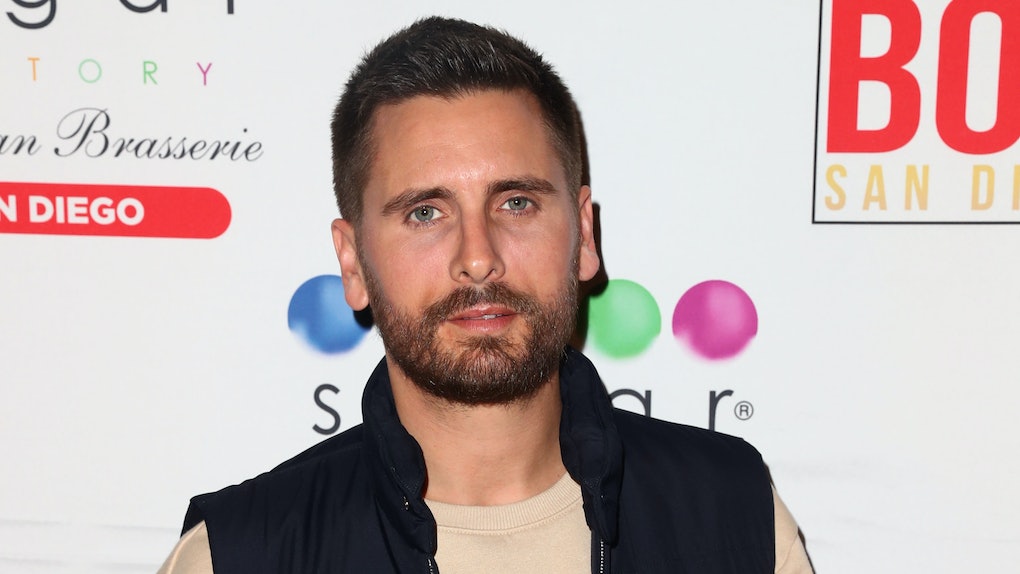 Who Has Scott Disick Dated? His Relationship History Proves He Has A Type

The world was first introduced to Scott Disick when he appeared on Keeping Up With the Kardashians. At the time, he was Kourtney Kardashian's boyfriend, and the two seemed focused on building a life together, but a lot has changed since then. In addition to his on-again, off-again romance with Kardashian, Scott Disick's relationship history includes several other ladies, all leading up to his most recent flame, Amelia Gray Hamlin. But despite his many past exes, it seems like Kardashian will always hold a special place in Disick's heart.

In a sneak peak clip for the final season of KUWTK, Disick revealed he would love to "eventually get married" to his ex, even though they're not together right now. "I love you and I'm ready to marry you right here, right now," Disick said. Of course, Kardashian looked a little taken aback since they've had their ups and downs in the past, so she told him he'll have to "work" on himself first. Fans will have to wait and see what happens when the final season premieres on March 18, but in the meantime, let's take a look back at Disick's dating history over the years, because it is seriously complicated.

Disick and Kardashian were first introduced by their mutual friend (and Girls Gone Wild creator) Joe Francis at a house party in 2006. The two dated on-and-off for nearly a decade, and during that time, they welcomed their three kids together: Mason, Penelope, and Reign. However, their relationship came to an end in July 2015 after Kardashian decided she couldn't put up with Disick's substance abuse issues any longer — not to mention Disick was rumored to be dating another woman around the time of their breakup.

In July 2015, right around the time of his split with Kardashian, Disick was reportedly spotted getting cozy with a mystery woman in Monte Carlo, and she was later identified as stylist Chloé Bartoli. According to a source for Us Weekly, Disick and Bartoli reportedly dated a decade earlier before he got serious with Kardashian.

Two years later in May 2017, Disick and Bartoli sparked dating rumors again when they were reportedly seen kissing in Cannes, but it's unclear whether the two actually dated (especially since she wasn't the only lady who Disick reportedly hooked up with on that trip).

In January 2016, a source for Us Weekly reportedly claimed Disick was dating Swedish model Lina Sandberg, but little else was heard about the rumored relationship after that initial report.

After his rumored romance with Sandberg, Disick reportedly dated model Christine Burke for a hot minute. Reports first emerged about Disick and Burke's maybe-relationship in March 2016, and two months later, the two were reportedly seen making out during a yacht party in the South of France. However, nothing else was heard about the potential couple after that.

Disick was first linked to Australian model Megan Blake Irwin in April 2016, when the two were reportedly spotted getting dinner and clubbing in New York City. Four-and-a-half years later, Disick and Irwin briefly sparked relationship rumors again when they were once again reportedly seen enjoying dinner together (this time in West Hollywood) in October 2020, but nothing else was heard about a potential romance.

During Season 13 of Keeping Up the Kardashians, Disick joined the Kardashians on a January 2017 vacation to Costa Rica, where he came under fire for inviting another woman along on the trip. That woman was model Bella Banos, and in February 2017, she opened up about their relationship to InTouch Weekly, saying she and Disick met back in 2015 through her ex. "Scott calls me his girl and we have said 'I love you,'" she said. "At first, Scott was just my friend. But he got to know me on a different level. We're super connected."

Little else was heard about Banos and Disick until October 2020, when the two were reportedly spotted dining together in Malibu, but it doesn't seem the exes decided to rekindle things.

In January 2017, not long after he returned from his Costa Rica trip with the Kardashians, Disick was reportedly spotted making out with model Jessica Harris in Miami, but little else was heard about the two.

Just one day before Disick was reportedly engaged in PDA with Bartoli in Cannes in May 2017, he was reportedly spotted canoodling with Bella Thorne. A week before that, Thorne and Disick reportedly got dinner together in West Hollywood before they boarded a plane together for France.

In July 2017, Thorne cleared up dating rumors during an appearance on Jenny McCarthy's SiriusXM radio show, saying she had never been with him "sexually," as his hard-partying lifestyle was too much for her to handle. She added, "Scott is really nice, sweet, charming. I don't drink, and he really drinks a lot. And it just ended up… I just wasn't down. I was like, 'I [got to] leave.'"

Apparently, Disick got flirty with quite a few women in Cannes, and Australian model Ella Ross was one of them. The two were reportedly first spotted on what looked like a date night in Malibu earlier in the month, and a few weeks later, Disick was reportedly spotted putting his arm around Ross in the pool during his Cannes trip. However, little else was heard about the maybe-relationship after that.

Disick's longest relationship since Kardashian was with Sofia Richie, who he began dating in summer 2017. By September of that year, Disick and Richie were Instagram official. During their three-year relationship, the two went on plenty of vacations together with his kids (as well as with Kardashian) but in May 2020, they reportedly ended up calling it quits.

Two months later, the couple reportedly reconciled, but that apparently didn't prove successful. In August 2020, the two reportedly decided to split for good.

Hamlin and Disick dating rumors began after they reportedly arrived at Kendall Jenner's Halloween party in the same car in October 2020, per Us Weekly. Over the next few months, the two kept the rumor mill turning with social media flirtation and reported date nights, and they even rang in the new year in Mexico along with friends.

Everything seems to be going well with Disick and Hamlin so far, but with Disick, you never know what will happen next.