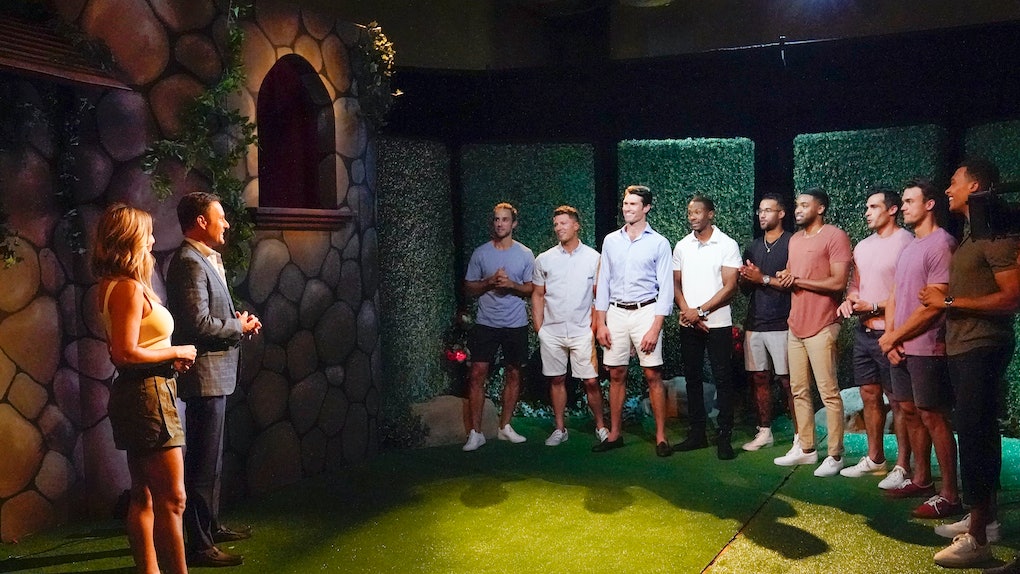 Clare Crawley made it clear from the beginning of her season of The Bachelorette that she knows what she wants and she isn't afraid to communicate it. In Week 2 of The Bachelorette, the guys vying for Clare's heart got to show off their communication skills — or lack thereof. One guy in particular wasn't able to properly convey his feelings, so Clare sent him packing. Who goes home on Clare's Bachelorette Week 2? Literally just Brandon Goss.

In the first group date of the season, nine of Clare's guys' had to prove they know how to "speak to Clare's heart" throug hthe love languages. First off was words of affirmation, with a little Romeo & Juliet role play. After the guys all spoke (supposedly from their hearts),Clare seemed genuinely touched by their sentiments. "It's been a long time since I've heard such kind words from men," she told them.

After some gift-giving and very steamy physical touch, the nine guys got some quality time with Clare during the cocktail party. It started off a bit rocky, with Clare getting upset that the guys didn't seem very eager to talk to her. But once that was smoothed over, Clare got to have some meaningful conversations (including another feelings-heavy one with Dale Moss) and ended up giving Riley Christian the group date rose after he showed off his slow dance skills. So, Riley was safe for the week.

Next, Jason Foster got to go on the first one-on-one date with Clare. Clare continued the theme of open communication by asking Jason to write a letter to his younger self. She got him to fully open up during the date and he shared some of the worst things he's ever thought about himself. Luckily, it didn't deter Clare, and he still received a rose — another man safe from elimination.

The remaining 10 guys showed off a whole lot more than their emotions during the next group date. Clare had them play a game of strip dodgeball, which left the losing team putting it all out there... literally. Some of the guys were upset about having to get naked, but others were simply upset that the losing team didn't get to attend the cocktail party with Clare later.

And that brings us to poor Brandon. Brandon may have been part of the winning dodgeball team, but he was certainly not a winner of the date. During the evening part of the group date, Claire had some alone time with Brandon that did not end very well.

It started off solid enough, with Brandon telling Clare he wanted to be on this season of The Bachelorette specifically because of her. But when Clare asked what, exactly, did he like about her, Brandon came up with nothing. He said she was pretty and that he wanted to get to know her, but Clare was frustrated, since she knew there were other men (let's be real, mostly Dale Moss) who had more to say about her. For that reason, Clare decided to send Brandon home right on the spot.

Because there was no rose ceremony during The Bachelorette Week 2, Brandon was the one and only guy to go home this time around. It just goes to show Clare has no time to waste when it comes to finding love.