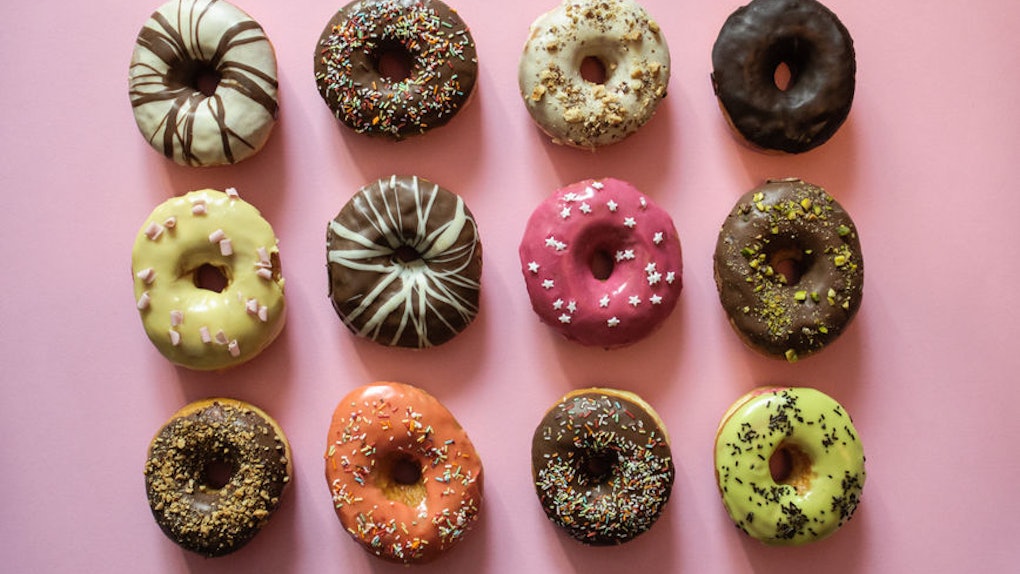 Mark your calendars, because National Doughnut Day is happening on Friday, June 1. Doughnut chains across the country will be offering free or discounted doughnuts to make your Friday that much sweeter. You're welcome. From traditional glazed to chocolate sprinkle, save some dough by chowing down on these breakfast bargains. Here is where to get free doughnuts on National Doughnut Day.

Before you take advantage of these tasty deals, let's briefly explore the history of the celebratory day. The more you know, right? National Doughnut Day, which is held on the first Friday of June each year, got its "official" start in 1938 thanks to The Salvation Army. The organization decided to honor the women known as "Donut Lassies," who served donuts and coffee to the troops during World War 1.

This started back in 1917, when roughly 250 Salvation Army volunteers traveled overseas to provide clothes and supplies, as well as baked goods to soldiers near the front lines. Given the conditions of war, it was not easy for the women to bake in the huts, so a few volunteers began frying doughnuts in helmets.

Today, the unofficial holiday is good for enjoying deals on doughnuts, but still pays tribute to the "Doughnut Girls" of World War 1. There you have it. There's no disputing that doughnuts are a longstanding food item that bring us together in the most delicious way possible.

Here are some sweet deals you "doughnut" want to miss this National Doughnut Day.

Krispy Kreme is known for their hot glazed doughnut, but, in honor of National Doughnut Day, the retailer is offering customers a free doughnut of their choice all day long. No strings attached. If you've had your eye on the new Chips Ahoy! Doughnut, Nutter Butter Cookie Twist Doughnut, and Oreo Cookies and Kreme Doughnut, now is your chance to give one of these bad boys a try before they leave the menu.

This deal is good while supplies last and is only valid at participating Krispy Kreme locations throughout the U.S. Check with your nearby store before you go.

If you already stop at Dunkin' Donuts for your morning coffee, make sure to get your free doughnut with any beverage purchase to celebrate National Doughunut Day. Celebrate the holiday with one of Dunkin' Donut's newest menu items: the Chocolate Cake Batter Donut or the Vanilla Cake Batter Donut. While you won't get the day off work to indulge in one of these doughnuts (unless you've got some serious PTO to burn), you can snag any doughnut of your choice all day long on Friday, June 1 . The offer is good at participating Dunkin' Donuts stores.

Tim Hortons is best known for its coffee and doughnuts. While the Canadian-based fast food chain isn't offering any free goods on National Doughnut Day, they are giving you a chance to win free doughnuts for an entire year. Starting at 6 a.m. on Friday, June 1, be the first patron to ask for "Gold Timbits" at a participating location and you'll score free doughnuts, in addition to a box of 24K Gold Timbits, for the next 365 days. Score.

This promotion is only valid at five participating locations in Buffalo, New York; Columbus, Ohio; and Detroit, Michigan, if you don't live nearby one of these cities, so it might be time to pack up for a roadtrip in the name of free doughnuts.

The deal is good at pariticpating locations from 5 a.m. to 10 p.m. on Friday, June 1. Whether your into hot or iced coffee, you can have it all with this deal. Cumerland Farms offers a variety of doughnuts such as Bostom Cream, chocolate frosted, classic glazed, and more so you can get your doughtnut fix. Find a location nearest you.

These are the top four doughnut chains across the country where you can score a sweet deal to celebrate National Doughnut Day on June 1. Of course, doughnut shops are everywhere. If you have a favorite local spot, check there, too.

While you're celebrating the day, take a few minutes and submit your application to Entenmann's. You might just be selected as their Chief Donut Officer.