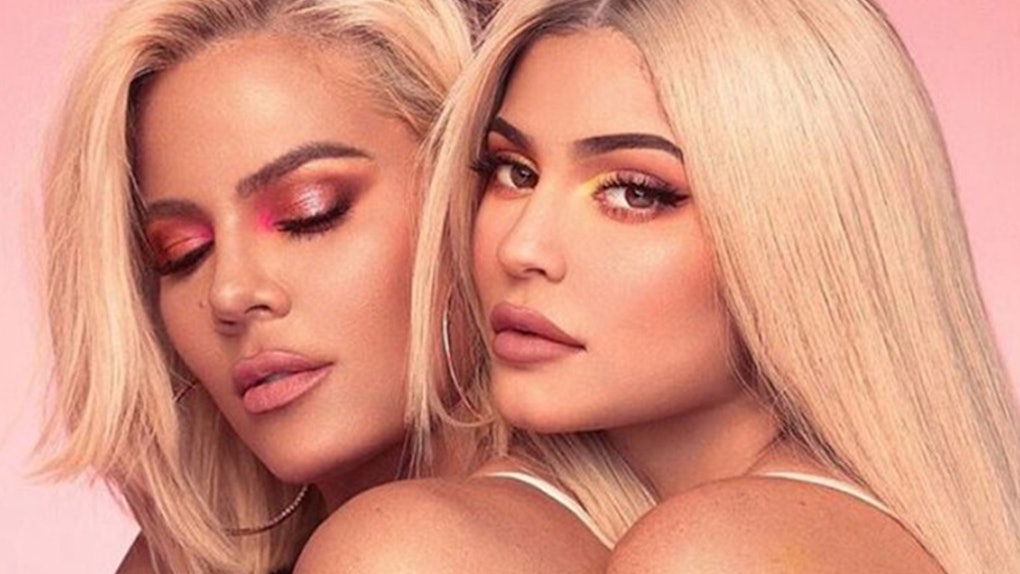 When Does Kylie Cosmetics' Koko Kollection Round 3 Drop? Here's How Soon You Can Snag It

There's a lot going on in the beauty world right now, but real talk, I'd be lying if I said Kylie Jenner's newest makeup collab with older sister Khloé Kardashian didn't have my full attention. It's their third collab to date, and I absolutely loved the first two, so I'm really banking on their third release to be just as good, if not better. When does the Kylie Cosmetics Koko Kollection Round 3 drop, you ask? Sooner than the Kylie Cosmetics x Kendall Collection we're all waiting for, that's for sure, so I advise saving enough coin for both.

As I mentioned, Jenner began teasing a collab with her sister, Kendall, in a YouTube video uploaded last week meant to showcase a ~typical day in her life~. She covered mom duties, friends' birthday dinners, meetings, and photoshoots, but the most interesting thing about the video was the mention of a new sisterly collab — especially given that Kendall is the only Kar-Jen sister without her own Kylie Cosmetics products to date. Even Kris, their momager, has had her own collection — which, not for nothing, was so major.

That said, I was obviously banking on the Kendall drop being the brand's next collection. Cue my surprise when they announced a third collab with Khloé instead:

Confused? A little. Thrilled? Yes, very much so. The previous Koko Kollections housed some of my all-time fave Kylie Cosmetics products, and this time around, the lineup looks equally as good. I'll be buying it all, if you're wondering.

It's a small drop, but everything looks amazing:

The Koko Palette houses nine shades that range from matte pale yellow and pinky red to icy white shimmer and deep bronzy sparkle. There's a lot going on, in the best way possible, and I love how versatile the colorstory is. To keep the rest of the look neutral, the other products are more understated shade-wise, but gorgeous nonetheless. The "True Mama" highlighter is an icy, pearl dream, and not gonna lie, it's exactly the kind of shade I'd wear on the inner corners of my eyes every damn day.

Unless, of course, I was feeling badass and wanted to copy Khloe's bright pink inner corners...

...Or Kylie's pale yellow inner corners. Like I said, this drop is versatile!

In addition to the palette and highlighter, there's one lip liner in neutral "Handbag Ho" and two Matte Liquid Lipsticks. "The Bigger The Hoops" is a rosy nude with what I originally thought was the best name in Kylie Cosmetics history. Then I learned that the nude lippie was called "Allergic To Bullsh*t, and realized that's the best name in Kylie Cosmetics history. Case closed.

All in all, this tiny collection is a total home run:

So, you want to shop it, too? I don't blame you. You can snag the entire Koko Kollection Round Three when it hits the Kylie Cosmetics website on June 14.

More like this
How To Get A Trendmood Box, AKA The Next Big Thing In Beauty Box Subscriptions
By Bella Gerard and Theresa Massony
Jackie Aina Is Cutting Ties With Morphe — Here's Why
By Margaret Blatz
Where To Get Machine Gun Kelly's UN/DN Unisex Nail Polish Line
By Margaret Blatz
Stay up to date