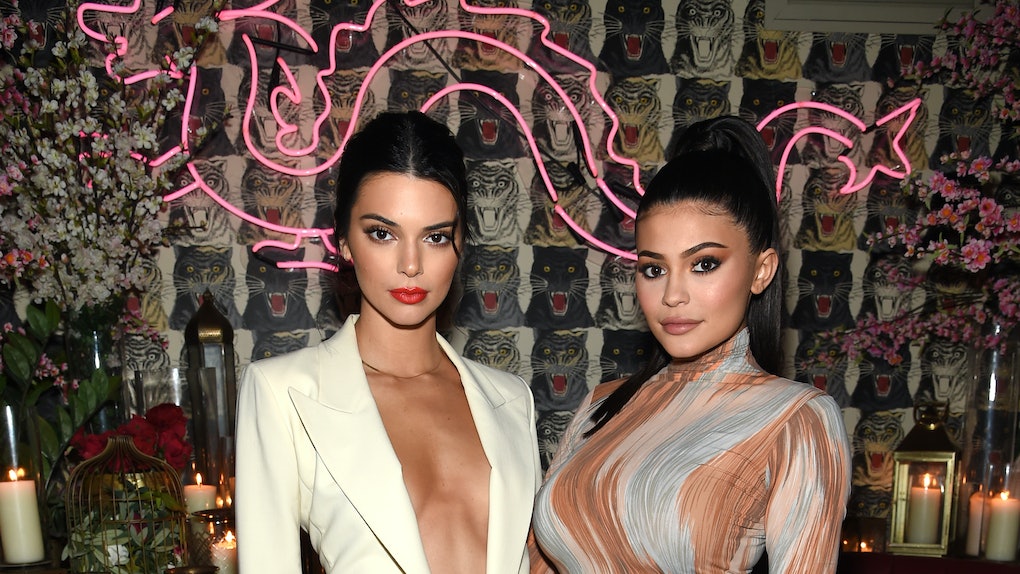 A Kendall Jenner x Kylie Cosmetics Collab Is Happening, According To Kylie

In an interesting new development, Kylie Jenner has started actively uploading videos to her YouTube channel, and in the latest vlog titled "Kylie Jenner: A Day In The Life" she gave viewers a look into well... a typical day in her life balancing motherhood, work meetings, and a social life. She also managed to slip in her latest business collaboration with one of her family members. That's right, in the video posted Monday, June 3, news of Kylie and Kendall Jenner's makeup collab was revealed.

About four minutes into the 19 minute video, you can see Kylie meeting up with Kendall in the parking lot of the Kylie Cosmetics office building. "We have a collab coming," Kylie shared.

The two then went into a meeting that viewers only got a brief glimpse of. Kylie can be heard mentioning using cream in one of the products and then sharing ideas of using "gold Kendall" and "black Kendall" on other cosmetics.

Up until now, Kendall was the only Kardashian-Jenner sister who hadn't collaborated with Kylie on a Kylie Cosmetics makeup collection. We've seen Kylie work with sisters Kim, Kourtney, Khloé, and even mom Kris, but not Kendall. Well, that is about to change.

Save for the mentioning of cream, there's no further details surrounding the upcoming makeup collection, however, if it's anything like past Kylie Cosmetics launches, it's bound to be a hit.

And while there are limited details surrounding the Kylie Cosmetics x Kendall makeup collection, Kylie did manage to share a few details about other upcoming launches for both Kylie Cosmetics and Kylie Skin.

"I think we should do this for our anniversary on November 30. I think it would be amazing," the makeup mogul said in the video during the Kylie Cosmetics meeting that happened after her meeting with Kendall. And in case you're not aware, the anniversary that Kylie is speaking of is the fourth anniversary of Kylie Cosmetics. She is seen flipping through sketches for gold products that will apparently launch in November.

Stormi's mom also shared a new product that is in the works for her recently launched Kylie Skin collection. "The first SPF product for Kylie Skin," Kylie shared in the video. So if you're a fan of Kylie's new skincare products, be on the lookout for news surrounding a sunscreen launch.

But that's not all — Kylie also went on to share glimpses of sketches for mini versions of a few already-released Kylie Skin face products as well as the idea of doing a Kylie Skin truck this summer. "I for sure want to do a Kylie Skin truck and serve soft-serve ice cream, iced coffee, pink lemonade — just super cute summer vibes, and sell the products around L.A.," she shared.

I'm sure you remember Kylie's Life of Kylie TV show that aired on E! back in 2017 prior to Stormi's birth — well, Kylie's new vlog gave us those same sort of vibes. Could Kylie's YouTube channel replace her hit E! TV show? While that's still yet to be determined, if more vlogs means more glimpses of new Kylie Cosmetics and Kylie Skin products, then I'm certainly here for it.