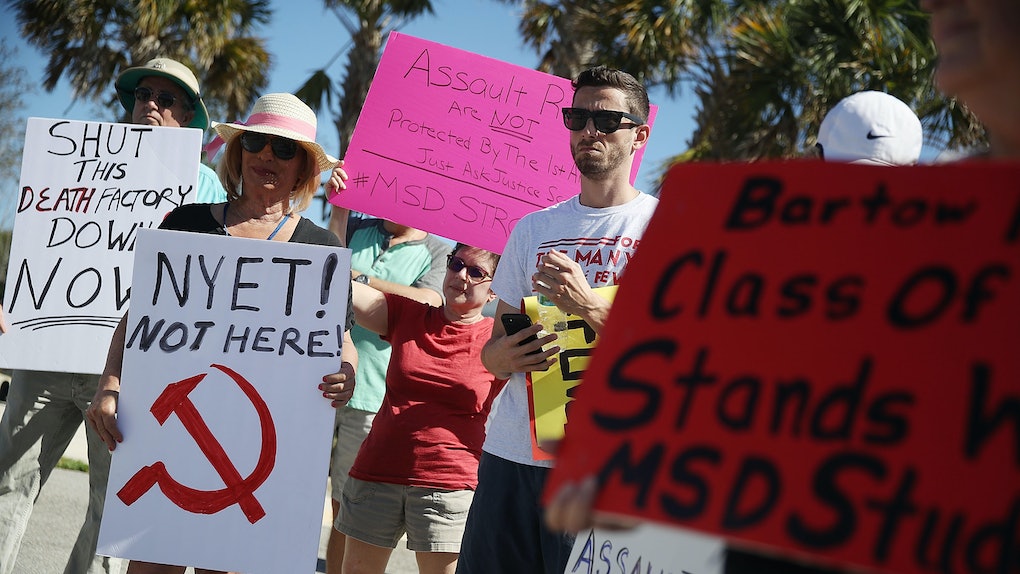 What Time Is The National Student Walkout? Set Your Reminder

On the morning of March 14, classrooms nationwide will temporarily empty out as students and staff pause to honor the victims of the Feb. 14 shooting in Parkland, Florida. Wednesday marks the first of three major demonstrations against gun violence in schools this spring following the attack. If you're getting ready to set a reminder for the event, here's what time the national student walkout will take place and what you should know about it.

Organized by EMPOWER, the youth arm of the Women's March, the #Enough! National School Walkout begins at 10 a.m. for each respective time zone in the country, and will last for 17 minutes — one minute for each life lost in the tragedy. As for why it's on March 14, the official website says it chose the day to mark the one-month anniversary since the attack. Participants, aside from honoring the victims, have larger messages they aim to convey.

The purpose of the walkout is to protest gun violence in all forms, as well as pressure Congress to take action to eliminate it. Walkout participants are encouraged to use that 17 minutes in whatever way they feel is best. "Some students plan to circle their school holding hands while others will congregate in hallways to hold hands, sing songs or stand together in silence," the website reads. "Others plan to speak the names of people killed by gun violence — from the 17 students killed in Parkland to members of their own family or community." Students are also encouraged to use that time to complete voter registrations for those that will be eligible to cast a ballot in this year's midterm election.

There are multiple ways people are participating, and not just students. Citing safety reasons for students and staff, the Women's March website says that only students and staff of that particular school should take part. For those who don't have class at that time, the group is urging college students to organize on-campus gatherings in central areas. But for anyone else who isn't a student or staff member, or can't participate by doing the 10 a.m. walkout, there are still ways to show support and solidarity.

"If others would like to participate, they can show solidarity by wearing orange and/or walking out of their workplaces to stand with others for 17 minutes," the group's website says.

Wednesday's walkout comes during what's already been a roller-coaster month for the gun debate. Following weeks of protests, forums, and even a couple legislative breakthroughs in statehouses across the country, President Donald Trump's administration on Monday announced a series of proposals designed to address the issue of gun violence, including providing firearm training to teachers. The administration stayed quiet on its earlier promise to raise the minimum purchasing age from 18 to 21, though, among other target demands gun control advocates had been pushing for. The backpedaling came after Trump held a meeting with the National Rifle Association (NRA) earlier this month, per The New York Times.

With the drama in Washington just as tense as ever, students are making their voices heard at an apt moment in history. And their message isn't just happening during those 17 minutes.

There are two more mass demonstrations happening this spring, in fact. So if you won't be able to participate in the March 14 walkout, there's still time to prepare for the March For Our Lives on Saturday, March 24. This one, led by students from Marjory Stoneman Douglas High, will bring together students and allies for more protesting, and the National School Walkout on April 20 will offer students another opportunity to send a message. Both organized by students, the demonstrations already have a massive base of support; as of writing, the April 20 walkout had received over 250,000 signatures pledging participation online.

The Women's March is anticipating over 185,000 participants in the #Enough! National School Walkout on Wednesday, according to Fox News.

Some schools are allowing their students to participate without penalty, while others aren't. If you're planning to take part, now's a good time to brush up on what your rights are as a student and what schools are allowed to do for discipline before the big day.