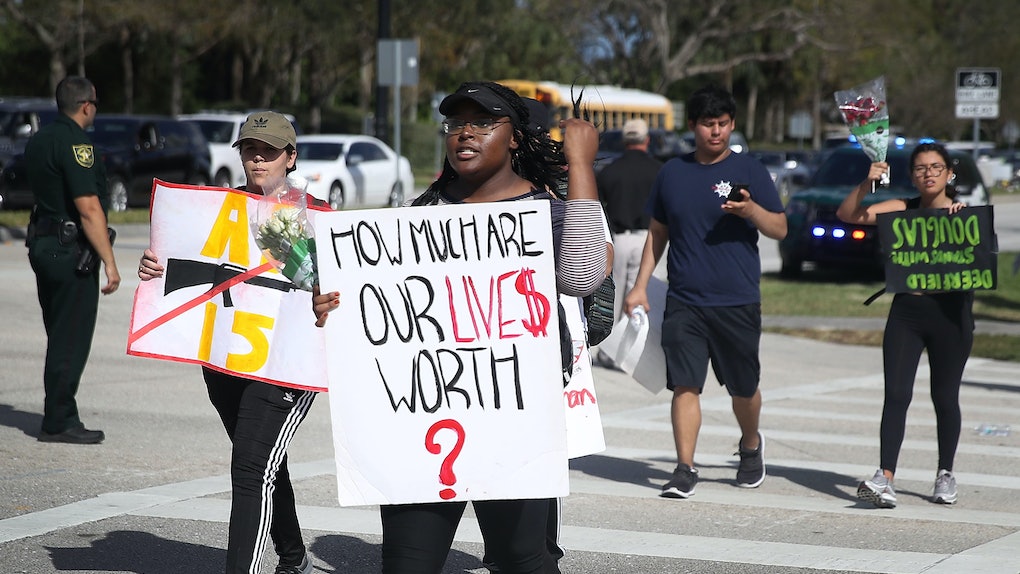 In the aftermath of the Feb. 14 shooting in Parkland, Florida, students across the country have planned demonstrations to call for gun control. Some of those demonstrations come in the form of walkouts, and in some cases those plans for walkouts have been met with threats of punishment from school administrators. In response to those threats, however, have come statements from colleges that aren't punishing students for protesting gun violence.

The list of universities includes Ivy League institutions like Yale, Brown, and Dartmouth, as well as other prestigious names like the Massachusetts Institute of Technology (MIT) and the University of California-Los Angeles (UCLA).

In a blog titled "In Support of Student Protests," Hannah Mendlowitz, a senior assistant director of admissions and recruitment at Yale, assuaged the fears of incoming students who planned to take part in protest for gun control. She also said she would be supporting the student protestors all the way from New Haven, Connecticut, where Yale is located. The blog post reads,

To the students who have reached out to us with these concerns, we have made clear that they should feel free to participate in walk-out events to bring attention to this issue without fear of repercussion. Yale will NOT be rescinding anyone’s admission decision for participating in peaceful walkouts for this or other causes, regardless of any high school’s disciplinary policy. I, for one, will be cheering these students on from New Haven.

According to a Feb. 24 report from Reuters, over 40 universities made statements saying they would not punish students for participating in protests.

In addition, multiple local news media outlets have kept tabs on which colleges within their respective states have followed suit in making similar promises to students.

The Courier Journal has also reported on a widely circulated Google document that includes a list of over 100 colleges and universities that have said students' admission status will not be affected by participation in protests against gun violence. Each institution on the list features a hyperlink to the published statement made by the university or college listed.

Featured on the list are Harvard, the University of Michigan, the University of Miami, Rutgers, and Vanderbilt. The latter of those four institutions stated in a tweet, "Students penalized for meaningful, peaceful participation in demonstrations will not be negatively impacted in our admissions process because they participated. Protection and promotion of civil discourse is central to the Vanderbilt experience and values."

The statements from colleges on protests for gun legislation are particularly relevant considering the approaching date of the National School Walkout. That demonstration is scheduled to take place on March 14, and plans to see students across the country walk out of classes for 17 minutes, with each one of the minutes dedicated to a victim of the February shooting in Parkland.

In anticipation of the protests, some school administrators have warned students about participating.

"Teachers will tell you straight up if you walk out, you will get written up and suspended," Ariyana Jones, a junior at New Mission High School in Boston, told NPR. "They are trying to intimidate us, and I feel like it's working because they don't want to get that on their record or get in trouble."

Meanwhile, dozens of universities have done the opposite, ensuring incoming students they won't be punished for protests,with some colleges even encouraging the demonstrations.