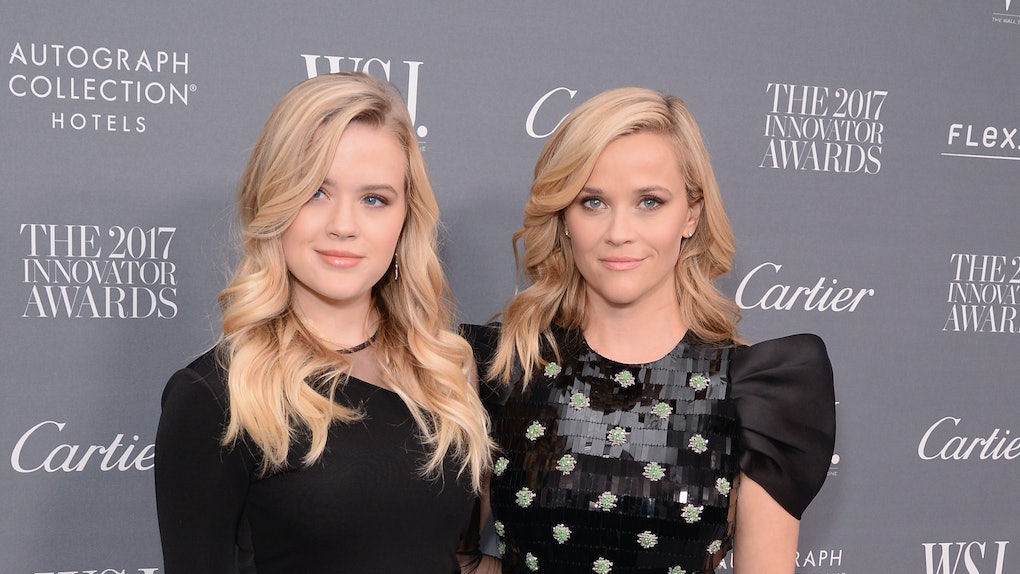 It's no surprise by now that body language — even subtle things like eye contact and even the direction you point your feet — can tell you a lot about how a person is feeling and how close they are with those around them. So it seems obvious that you can tell a lot about famous families by looking at celebrity mothers and daughters' body language. Some famous moms and daughters are like mirror images of each other and pose like they're a package deal, while others may be a little more focused on the red carpet at the time. But in any case, little details like where they place their hands can reveal a lot.

I spoke with body language expert and author Traci Brown to find out more about the bond between famous celebrity mother-daughter duos based on their photos together. The result? While sometimes it's hard to tell what's really going on on the red carpet, it's pretty clear that your favorite famous families have a lot of love for each other.

From Goldie Hawn and Kate Hudson to Hillary and Chelsea Clinton (with some Kardashians in between!) here are some sweet shots of famous moms and their daughters — and what we can learn about their relationships from them, according to the experts.

Right off the bat, Brown pointed out that Goldie Hawn and Kate Hudson are clearly the happiest to be together in the moment — not that you need to be an expert to notice how close they are in this photo!

"See how their fingers are interlocked there? That's what I notice most about this," Brown tells Elite Daily. "Their heads are leaning in together, they're tight, they're kind of like one unit."

Their pose in the photo shows that they definitely have a tight-knit relationship — plus, as Brown notes, it's clear their smiles are genuine.

"You can see the corners of their eyes and the crows feet...that shows a real smile," Brown says. "So they're happy to be where they are together."

Kim Kardashian and mom Kris Jenner don't exactly look like they're having a good time in this shot, but as Brown points out, it's hard to tell what's really going on here.

"It looks like they don't want to be there," Brown says. "Are they posed? I don't know. Had they just turned and now they're trying to get somewhere else? Maybe the flashes have been in their eyes. We don't know exactly what's going on, but they're definitely not excited."

Their smiles are more posed than genuine, too. Brown notes that the pair are smiling with their lips but not really with their eyes. (And the eyes show real joy.)

That doesn't necessarily mean these two aren't connected, though. For one thing, even though they're not excited in the moment, they seem to be on the same page about it. Plus, given that we have access to them on their reality show all the time, we can infer a lot more about their bond there.

"I see more connection from them in their TV show than I do in this picture," Brown says. "This is just a moment in time."

In this photo, Brown says it's pretty safe to say that superstar pair Diana and Tracee Ellis Ross are having a good time together — and that they have a loving, tight-knit relationship.

I'd say they're doing pretty well together," Brown says. "See how they're angled? They're almost at a 90 degree angle, that says they're really connected." (That angle, Brown explains, is often referred to as a "lovers' triangle," so it's definitely a positive thing!)

"This one's a little more candid ... so we get a little bit more of a real read that they're connected and they do have a lot of love for each other in this picture," Brown says.

Mom and daughter duo Reese Witherspoon and Ava Phillippe are basically mirror images of each other in this photo, which says almost as much about their connection as it does their genes. (Seriously, I can never get over how much they look like twins!)

All of that, combined with the fact that they even have similar expressions on their faces, says that they're definitely really close.

"I'd say these two are super tight," Brown says. "They're matching each other, and that's what you see from people who are deeply connected."

This is another instance where it's hard to tell what's really happening. "Red carpet photos are always tough because there's so much going on and we don't know what it all is by any stretch," explains Brown.

That said, in this photo you can still see that Willow and Jada Pinkett Smith are connected.

"Willow's got her arm around her mom there, and her mom Jada — something has her attention that definitely doesn't have her daughter's attention," Brown says. "[But, Willow's] arm's around her mom, so they do have some kind of connection there, for sure."

This photo of Hillary and Chelsea Clinton is interesting, Brown says, because "they're having a private moment together in public." And their body language, as a result, is super telling.

"See how Chelsea's grabbing her upper arm there? That says that they're very connected," Brown explains.

And Hillary's tight grip on Chelsea's waist shows that "it's a very important moment between the two of them — something major's happening here, and Chelsea's there to support [her mom] fully."

The most important thing to note here, however, is their eye contact.

"They're looking at each other in the eyes, and it's hard to look people in the eye that you're not very close to at that length," Brown says. "They're like six to eight inches [apart] there — it's hard to do that with sincerity unless you're very close."

Whether they're super posed or adorably candid, it's fascinating to see famous family members showing their strong connection together through their body language — even if it's just through subtle clues.

Anyone else feeling the sudden urge to take selfies with their mom right now? Same.