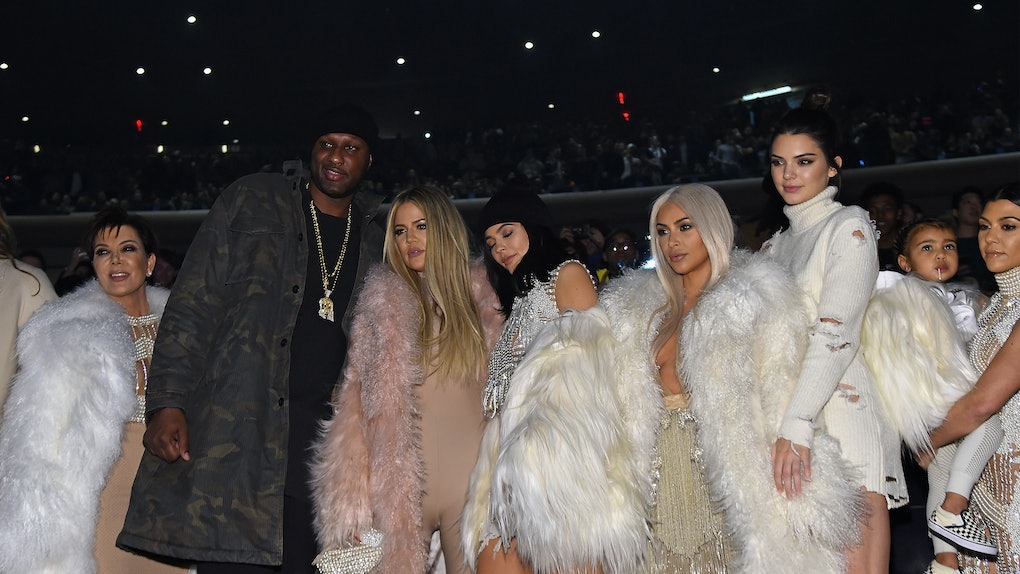 What Jeans Are The Kardashians Wearing In Their Christmas Card? The Brand Is Surprising

The Kardashian/Jenner Christmas card is the gift that keeps on giving. It grows bigger and better with each passing yuletide, and 2017's iteration is no exception. This year, the brood brandishes some seriously cute denim, and naturally, everyone is wondering about the jeans the Kardashians wear in their Christmas card. The casual blue jeans and white tank top outfits seem very low-key and wearable, for even a non-Kardashian/Jenner.

If you're wondering what exactly is so "bigger and better" about this year's dressed-down Kardashian card, it's the fact that it's not really a Christmas card at all. The family, mainly the eldest sisters, have taken to posting an advent calendar-style countdown of 25 (yes, 25) photos, practically gluing fans to their Twitter feeds. One photo a day is posted on social media, usually by Kim and Kourtney, and so far, they've predominantly featured the youngest generation of Kardashian offspring — in birth order: Mason, Penelope, North, Reign, and Saint, because I just happen to know that.

I'm distracted by their overwhelming cuteness, but also by the fact that the youngins and the rest of the family are all wearing simple jeans and white tees. That's right, the family that is known for wearing some of the most expensive and extravagant outfits possible is peeling back the facade, and showing off their more relatable side. Keep reading to find out exactly what jeans they are wearing, and how you can snag a pair for your own last-minute recreation.

Day one of the Kardashian bonanza was an innocent photo of Kim Kardashian's soon-to-be middle child, Saint West. Not much to see, yet, but it laid the groundwork for my future sleuthing.

Sticking with the theme so far, day two featured Kim's eldest, North West. This is where the jean theme started to pick up — Kim and Kourtney are in the background wearing the same style.

Day four made it clear that there is definitely a denim trend happening. And you know who makes jeans? Khloe Kardashian! Could they be Khloe's brand, Good American? Would the family ever pass up an opportunity for self-promotion? I bet Kris Jenner would frown upon that.

Kendall Jenner makes her first appearance on day 12, and to the surprise of no one, also wears denim pants.

Wait, something looks familiar about this...

For 2006's holiday card, the family did the same theme. Denim aside, my how times have changed. They've done some pretty elaborate photos in the past, but I guess they've decided to go the more modest route once more.

I reached out to the Levi's team to get the scoop on the Kardash/Jenner jeans, and of course, the fam isn't wearing your standard off-the rack Levi's. Instead, they're sporting the newest collection of Levi’s Authorized Vintage. These reclaimed (aka pre-worn pairs that have been jazzed up) vintage pieces are only available in a few select Levi's stores in the country. You, however, my dear readers, can get very similar jeans from the same brand, and get one step closer to being mistaken for a Kardashian/Jenner on the street.

If you dig Kourtney's vibes, this pair is more low-rise.

Get mistaken for Kendall Jenner in this form-fitting, high-rise pair.

If you want to rock a jean jacket like North West did on day four and on day eight, this one will have you looking almost as fly as she does.

Well folks, there you have it. Get ready to rock denim Kardash-style this holiday season. And considering there are 12 more days of Kardashian Kristmas Kards to go, I have a hunch they'll feature more members of the famous family (Kylie, where are you??), and maybe even shoutout Khloe's own line of blues.

More like this
The 2021 Met Gala Hosts Are Some Of Your Favorite Young Artists
By Theresa Massony
Jill Biden's Outfit At The 2021 Address To Congress Is A Throwback To A Special Moment
By Theresa Massony
Where To Buy Charli & Dixie D'Amelio's Hollister Fleeces, Each Designed By Them
By Margaret Blatz
Stay up to date