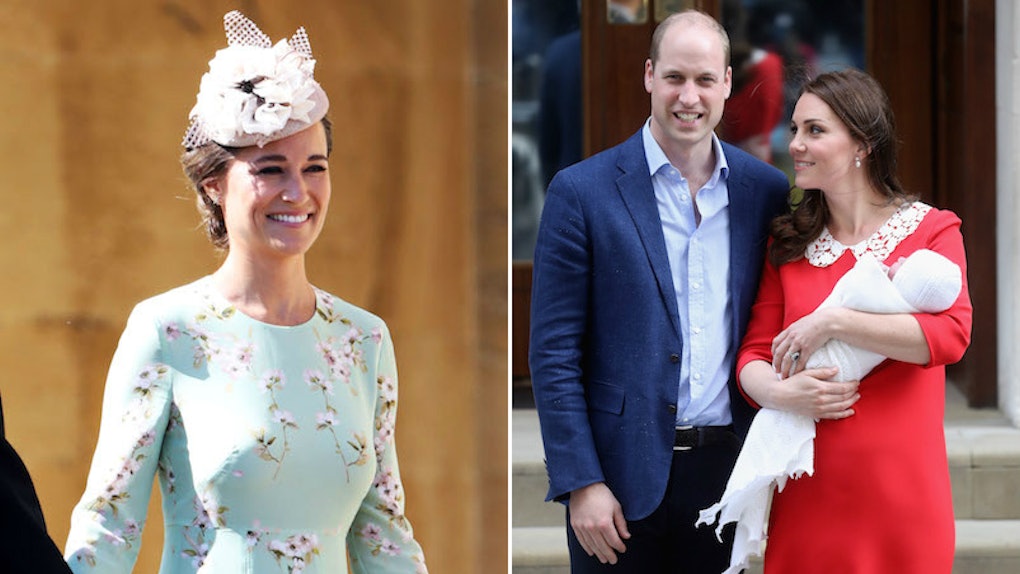 What Is Pippa Middleton's Baby's Name? It's Reportedly A Tribute To William & Kate's Son

I can't tell where my particular level of obsession with the royal family falls on the appropriate scale. Like, if number one is "Royal family who?" and 10 is "I can tell you all of their astrological signs and their medical histories," I'd like to think I'm smack dab in the center, right near "invested in Meghan Markle's wedding dress but don't know anyone's ages." That said, I'm here for Pippa Middleton's baby's name and ready and willing to dive into its meaning. What is Pippa Middleton's baby name, you might ask? Only the most regal sounding concoction yet.

According to Us Weekly, Middleton and her husband James Matthews have reportedly named their son Arthur Michael William Matthews. *Trumpet sounds!* The sweet babe was born on Monday, Oct. 15, which also happens to be the same day the Duke and Duchess of Sussex, Prince William and Meghan Markle, announced their pregnancy. Elite Daily reached out to Kensington Palace for confirmation and comment on the meaning behind the name, but did not hear back by the time of publication.

So, that means, it's up to me to break this down. *Cracks knuckles.*

The "Michael" in Pippa and James' son's name is reportedly in tribute to James' late brother, Michael, who died climbing Mount Everest at the age of 22. As for the "William" in Arthur's full name, it could be a nod to his famous uncle and heir to the throne or Pippa might have thought it just sounded nice. Either way, there is a lot going on here.

Of course, this makes everyone wonder what the hell Prince Harry and Meghan Markle are going to go with for their future baby. If they have a son, it looks like the names Philip and George should be on the table considering how much they pop up in the male relatives' names already. Of course, Philip is the name of Queen Elizabeth's sweet hubby, and George is the name of her father, King George VI, and her great-grandson, Prince of Cambridge, George Alexander Louis.

My god, I didn't even consider Alexander. What about the name Alexander, guys?!

Objectively, Harry and Meghan have already had a less traditional relationship than the palace is used to seeing. So, maybe they'll throw in a name curveball and pull from Meghan's side? The Duchess' full name is actually Rachel Meghan Markle and Harry's is Henry Charles Albert David.

There' a lot to work with here.

Come this Spring, Meghan and Harry's baby will join the party and then maybe the country will take a collective nap. That's if all the babies can keep it down, obviously.