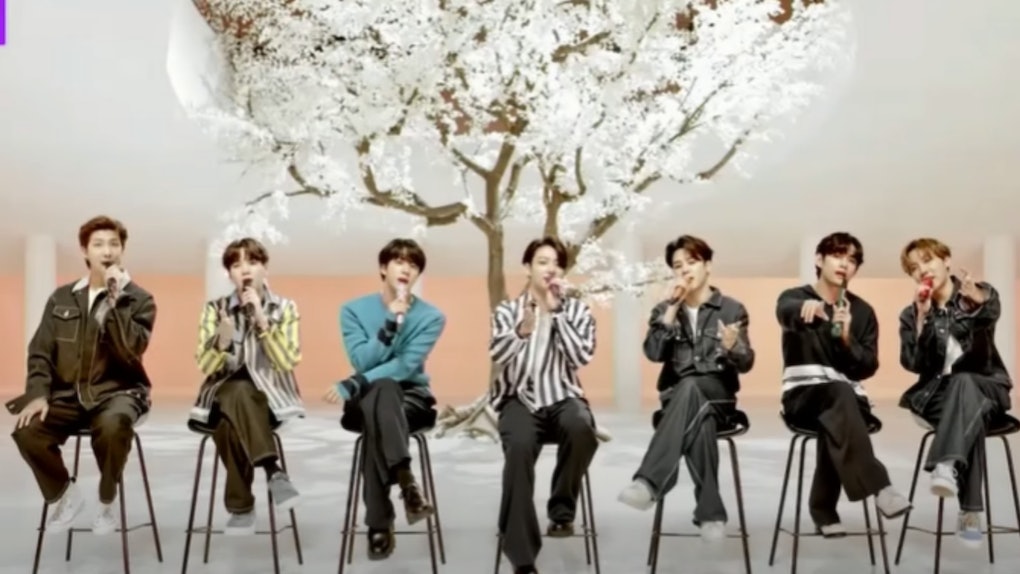 What Do BTS' "Your Eyes Tell" Lyrics Mean In English? It's A Heartbreaking Love Story

BTS' new Japanese-language album Map Of The Soul: 7 ~ The Journey ~ will arrive on July 15. Fans already heard its lead single "Stay Gold" in June, but now they got another taste at the album's sound with the release of "Your Eyes Tell." The song is composed by Jungkook, so fans were itching to know what BTS' "Your Eyes Tell" lyrics mean in English in order to see what he had to say.

Fans are so proud of Jungkook for writing "Your Eyes Tell," because it will serve as the OST for the upcoming Japanese film of the same name, set to be released on October 23. Through the years, he's been getting more involved in BTS' music process, like lending a hand on their Love Yourself: Tear track "Magic Shop" and writing his Map of the Soul: 7 solo song "My Time," so having one of his projects featured in a big movie release is a big accomplishment.

In a statement released to Billboard Japan on July 8, BTS teased "Your Eyes Tell" is "an expression of the beautiful and deep world of love in the movie" and its theme focuses on "how there is light in the future that your eyes are seeing, even in difficult situations," according to a translation by HelloKPop.

BTS performed the song for the first time on July 13 and fans couldn't get enough of the guys' gorgeous vocals. They said they felt each of the members' emotions with every word they sung and reading its lyrics only made the song more heartbreaking.

In "Your Eyes Tell," the guys compare a future without that special someone to a "world without color," but even if darkness is all they see, they'll still consider it "beautiful" because they're hopeful they'll see each other again. They're confident the darkness will only be temporary, and one day they'll see the light. Read the song's full lyrics below.

Why there are so many tears falling?

Hey, stay by my side and laugh

A future without you is a world without color

I stare into that monochrome coldness

Even the darkness is so beautiful

I want you to believe me

Whatever you're waiting for

Something that's far away from here

The place you gave me is still

That secure place for my heart

Shadows of the past chase me again and again

But the more I try to escape and struggle, the more it follows me

But I still want it, wherever you are I’ll find you

Even if it seems to be the beginning of the end

The gazing eyes are so colourful

Even it won't come true, I will they everything I can

To face the past and the future

It's nights like these that I keep on thinking

How much hope is needed to reach you

In the city at dusk

To be loved, to love someone, I’ll become your eye

For the adventure that lies ahead

Even the darkness we watch is so beautiful

I want you to believe me

Only looking straight at you

So you don’t go anywhere

The gazing eyes are so colourful

You have taught me that

Someday, sadness will turn us around

Your eyes, they tell

"Your Eyes Tell" was the perfect followup to BTS' "Stay Gold" because, in both songs, the group tells fans to stay positive even when things seem like they won't get better. ARMYs appreciate the song's beautiful message and they can't wait to hear it in the Your Eyes Tell film, which is set to premiere this fall.

More like this
RM & eAeon's "Don't" Lyrics In English Are An Emotional Rollercoaster Ride
By Michele Mendez
Who Is Billie Eilish's "Your Power" About? The Lyrics Call Out A Manipulative Ex
By Sydney N. Sweeney and Brandy Robidoux
Olivia Rodrigo & Joshua Bassett's "Even When/The Best Part" Duet Lyrics Are So Freaking Romantic
By Sydney N. Sweeney
Stay up to date