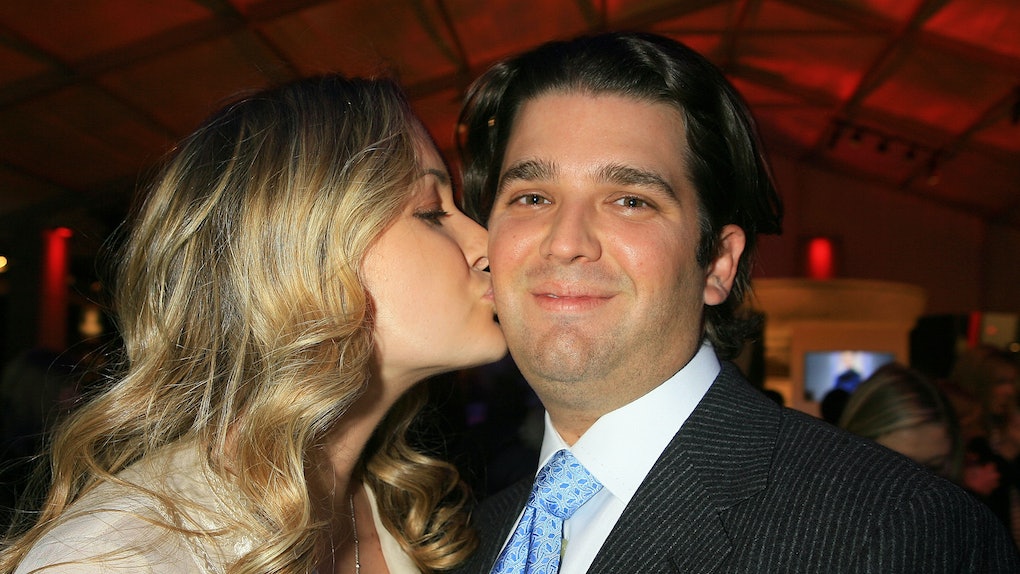 Trump Jr.'s Quotes About Vanessa & The Playboy Mansion Are Just Too Much

There's a lot of things that the current presidency has taught us, one of them being that, at any moment, an interview featuring a member of President Donald Trump's family can resurface and cause eye-popping reactions. Take Donald Trump Jr.'s quotes about his wife, Vanessa, while they were at a party at the Playboy Mansion. Trump Jr. made the comments over a decade ago, during an interview with comedian and podcast host Adam Carolla, but those comments were the subject of a recent article from HuffPost's Ashley Feinberg, which unearthed the remarks despite the interview appearing to have been deleted from the internet.

During interview, which was first released in January 2007, Trump Jr. joked about being at the mansion with his pregnant wife.

"Do you believe the hell I’m going through? I’m at the Playboy Mansion with a pregnant wife! It doesn’t get worse than that, does it? That's like a nightmare. Now, I love my wife, but that is rough. And I’m going to pay for these statements later on tonight. I’m gonna pay," Trump Jr. said.

The interview also, somehow, veered into a discussion about whether Trump Jr. "has a bigger package" than his father.

The 13-minute, decade-old interview stands out for a number of reasons. First is the very obvious fact that Don Jr. and Vanessa Trump are going through a divorce, which — let's face it — makes any joke about a pregnant wife look worse.

Then there's the fact that the interview shares a theme with other interviews of Trump Jr. and the elder Donald Trump. Both men have been the subjects of interview with show hosts who take take liberties in asking intrusive questions — and making jokes — about the appearance of the women in the Trump family. (Don Jr.'s 2007 interview with Carolla, for example, features comments about how Ivanka Trump is a "fox," which something you wouldn't expect to be brought up when you're talking to the woman's brother, but alas).

There's also the stunning similarities in which Don Jr. and his father speaks in interviews, seemingly looking to always charm the people in the room and keep the conversation going, even if an interviewer crosses what others would consider clear boundaries. For instance, during the 2007 interview, Trump Jr. is asked if he is attracted to his step-mother (Melania) while, at another point, Adam Carolla joked about Trump Jr. and Vanessa's marriage not being happy.

In retrospect, that might be one of the more prophetic things mentioned during the interview, given Don Jr. and Vanessa's recent split. In a joint statement shared with Elite Daily in March, the pair announced,

"When it started, they were very serious all of a sudden," a source claimed to Us Weekly. "He told her it was over with his wife, that they were separated and he didn’t love her — all of that stuff … Aubrey fell for him hard. She thought they were going to be together for real."

Affair or not, Don Jr. and Vanessa's marriage does seem truly over now. Though, in the meantime, it looks as if they are still friendly.

More like this
These Tweets About NASA's Photo Of "Blue" Dunes On Mars Are In Awe Of The Stunning Shot
By Lara Walsh
The Best "Just Because You're Vaccinated" Memes With Iconic Pop Culture References
By Lara Walsh
The Odds Of A Plane Crash Are One In 11 Million, Yet You're Still Afraid
By John Haltiwanger and Lilli Petersen
Stay up to date