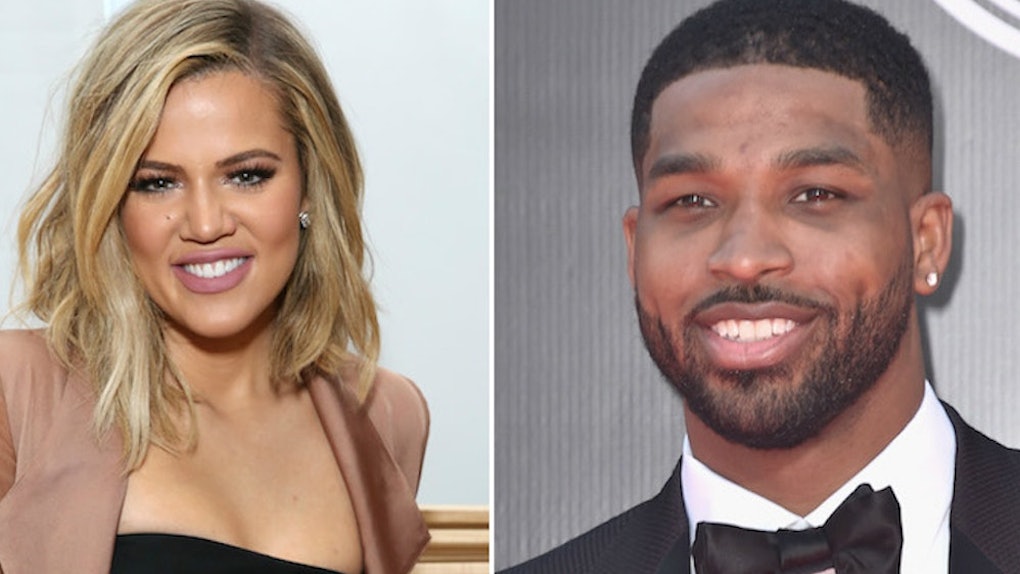 I have a lot of questions about everything surrounding the arrival of the newest member of the Kardashian crew: What's her name? When can I see adorable pictures of her undoubtedly perfect cheeks? And was Tristan Thompson with Khloé Kardashian in the delivery room for the birth of their daughter?

As many fans know, The Daily Mail released a video on Tuesday, April 10, that they claim showed Thompson kissing another woman at a club in NYC the previous weekend. TMZ also released a questionable video of Thompson with two women in a hookah bar, reportedly from October of 2017. Elite Daily reached out to Kardashian and Thompson's teams regarding the cheating reports but did not hear back by the time of publication.

Understandably, Kardashian is reportedly "distraught" by the allegations. A source revealed to E! News,

Her entire world has been turned upside down. She cried hysterically all night. She begged to come back to L.A. and tried to find any way to make it work but her doctor wouldn't let her. She just wants to be with her family and leave as soon as possible. Kris is there and completely supporting her.

She will obviously never be able to trust Tristan again or look at him the same way ... Her world is shattered. She is in complete disbelief that this is happening. The family absolutely believes it's in Khloe's best interest to end the relationship but will support her either way.

The news took a turn when Kardashian reportedly began experiencing contractions on Wednesday, April 11, the day after the initial allegations hit the internet. Suddenly, Kardashian may have had to make an important decision in the heat of a very intense moment: should Thompson be allowed into the delivery room?

According to TMZ, Kardashian personally does not want to speak to Thompson, and her family is encouraging her to end the relationship — but despite that, the Keeping Up with the Kardashians star and Good American designer ultimately wanted the basketball player to be in the delivery room at the time of the birth. The site reported that Kardashian believes a baby's bond with its parents begins at birth, and that she wanted the baby's father to be present for such a special and important moment.

Of course, it would be understandable if Kardashian changed her mind at any point, but it appears that she did not.

Kardashian gave birth to a baby girl around 4 a.m. on Thursday, April 12 at a Cleveland hospital, TMZ reports. The site also says that "Thompson was there." (They do not specify if he was actually in the delivery room, or simply present.)

Thompson played for the Cavs on Wednesday, April 11, just hours before Kardashian gave birth. He first appeared in the game near the end of the first quarter during a timeout, which meant he was able to take the court without the announcer calling out his name. But later, once fans realized he was playing, they began to boo.

Thus far, Kardashian and her family have commented publicly on neither the cheating allegations nor the arrival of the baby. But Khadijha Haqq McCray, the twin sister of Kardashian's best friend Malika Haqq, made her feelings loud and clear on Instagram, choosing a special quote that appeared to throw low-key shade toward Thompson. She posted an image that read, "the best thing a father can do for his children is to love their mother," attributed to basketball player and UCLA basketball coach John Wooden.

Regardless of how Kardashian currently feels toward Thompson, it's apparent that she has so much love in her life: from her siblings, from her friends, and now, from her beautiful baby girl.