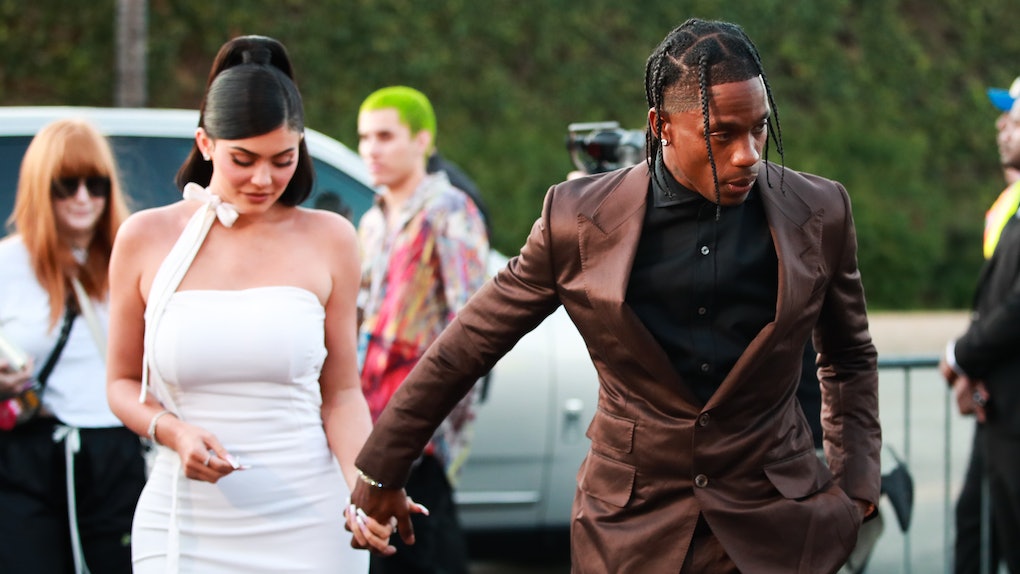 Travis Scott is following suit after Kylie Jenner took to social media to publicly address speculation around the reasons for their split. Ever since the parents-of-one announced that they were at least temporarily going their separate ways, rumors have been running rampant about the reasons behind the decision — and the "Sicko Mode" rapper is setting the record straight. In an Instagram post shared on Friday, Oct. 4, Travis Scott denied cheating on Kylie Jenner and reiterated that he's focusing on his career and family in the wake of the split.

It's been a whirlwind week for Jenner-Scott fans since TMZ reported that the couple had called it quits on Oct. 1, and then Jenner took to Twitter to confirm the news a few days later on Oct. 3, writing, "Travis and I are on great terms and our main focus right now is Stormi. Our friendship and our daughter is priority." While she didn't divulge the reasons for their unexpected breakup, an inside source told People that "trust issues" definitely played a part in their decision, igniting rumors that Scott might not have been faithful to the Kylie Cosmetics entrepreneur.

"They are taking some time but not done," the source told the publication. "They still have some trust issues but their problems have stemmed more from the stress of their lifestyles."

Just days later, the "Highest in the Room" rapper took to his Instagram Stories to break his silence on the matter.

"[It's] really affecting when u see false things said about you [sic]," Scott wrote. "Once again these false stories about me cheating are just simply not true. Focusing on life, music and family at this moment is what's real."

It's not the first time that the couple has been the subject of infidelity rumors this year. Back in February, reports alleged that Jenner had accused the Scott of cheating on her, and the rumors only escalated when the rapper then postponed his concert Buffalo, New York's KeyBank Center. For his part, Scott's rep said at the time that the rapper "vehemently denies he cheated" and the decision to cancel his planned show and fly back home was because he was "under the weather."

It seemed like the couple then reconciled, and appeared to cement their relationship in a joint Playboy interview before hitting up the premiere of Scott's Netflix documentary, Travis Scott: Look Mom I Can Fly, on Aug. 27 with plenty of PDA.

For her part, Jenner has had to take to Twitter to defend herself against reports that she hung out with ex Tyga on Wednesday, just hours after she confirmed that they'd indeed split up.

"The internet makes everything 100 times more dramatic than what it really is," she tweeted in response to the reports on Oct. 3. "There was no '2am date with Tyga.' You see me drop two of my friends off at a studio that he happened to be at."

From the sounds of things, the former couple is still figuring things out and the split isn't set in stone just yet, so I'd stay tuned over the next couple weeks to see if their decision to separate is a permanent one.