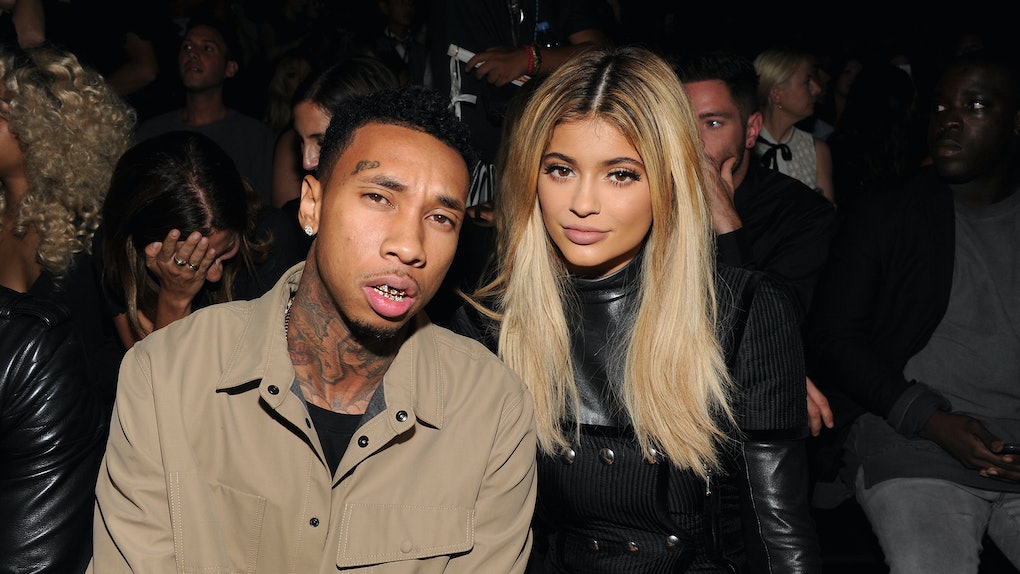 Just when you thought things couldn't get any more dramatic in the wake of her breakup with Travis Scott, it turns out Kylie Jenner and Tyga reportedly hung out after hours at a Los Angeles recording studio on Oct. 1. Multiple sources reported that Jenner was spotted, along with her friends Anastasia "Stassi" Kranikolaou and Kelsey Calemine, going to a nightclub called Delilah in West Hollywood at around midnight. After hitting up the club, the friends reportedly headed over to the Sunset Marquis, where Tyga was reportedly recording.

UPDATE: On Oct. 3, Kylie denied that anything romantic happened with Tyga at the recording studio. She tweeted, "The internet makes everything 100 times more dramatic than what it really is. There was no '2am date with Tyga'. You see me drop two of my friends off at a studio that he happened to be at.

EARLIER: According to E! News, Tyga was reportedly here with some friends when he reportedly invited Jenner and her friends to come chill. "Kylie wanted to have a girls' night out last night and Stassie thought it would be best to get her out of the house and her mind off the news," a source told E! News. "He was with a few of their mutual friends at Sunset Marquis and invited Kylie and her girlfriends to come hangout, since they were already out."

While the source claimed that Kylie and Tyga "have been in touch" since they officially broke up in 2017, the source also made it clear that they reportedly "don't talk often."

I know, I know, I know. Hanging with your ex after rumors that you broke up with your current boyfriend is a little suspect. But there really is reportedly nothing romantic between Kylie and Tyga. Moreover, Kylie was reportedly not trying to hurt Travis at all. "It wasn't an intentional jab at Travis, but she did hangout with Tyga for a bit," the source explained to E! News. "Nothing romantic is going on." (Elite Daily reached out to reps for Kylie and Tyga for comment and did not hear back in time for publication.)

These reports of Kylie and Tyga's Oct. 1 meeting come after news that she reportedly hung out with him at a Vegas nightclub on Aug. 24. According to Us Weekly, the exes reportedly ran into each other at the nightclub Sapphire. A source who spoke to Us Weekly said that Tyga and his squad reportedly headed up to the club's Skybox Suites to do some private karaoke shortly after they arrived. When Kylie and her squad rolled up, they reportedly headed to Tyga's suite and joined in on the karaoke fun. The source said they were both reportedly in “good spirits" and that they were reportedly singing the night away until 5 a.m.

Kylie and Tyga have both made it clear since they split that they have no hard feelings towards each other.

“There was absolutely not one thing wrong with me and T. He and I will always, always have a bond,” Jenner explained on an August 2017 episode of her E! reality show Life of Kylie. “There was no crazy fight, we just decided…Well, I decided that I’m really young. I don’t want to look back in five years from now and feel like he took something from me when he’s really not that type of person.”

Tyga shared a similar message in a February 2018 interview with Complex's Everyday California. “You just get older, you get me? It was a relationship in front of the world, and that was it,” Tyga said about Jenner. “She has her new life, I have my new life and that’s it. There’s no bad blood, no problems.” In the same interview, Tyga made it clear that he still keeps in touch with Kylie saying, "We communicate here and there.”

Listen to his full interview for yourself here:

So, yes. Hanging with your ex when you're reportedly fresh off a split might be complicated for some people. But it really does seem like these two are just friends.