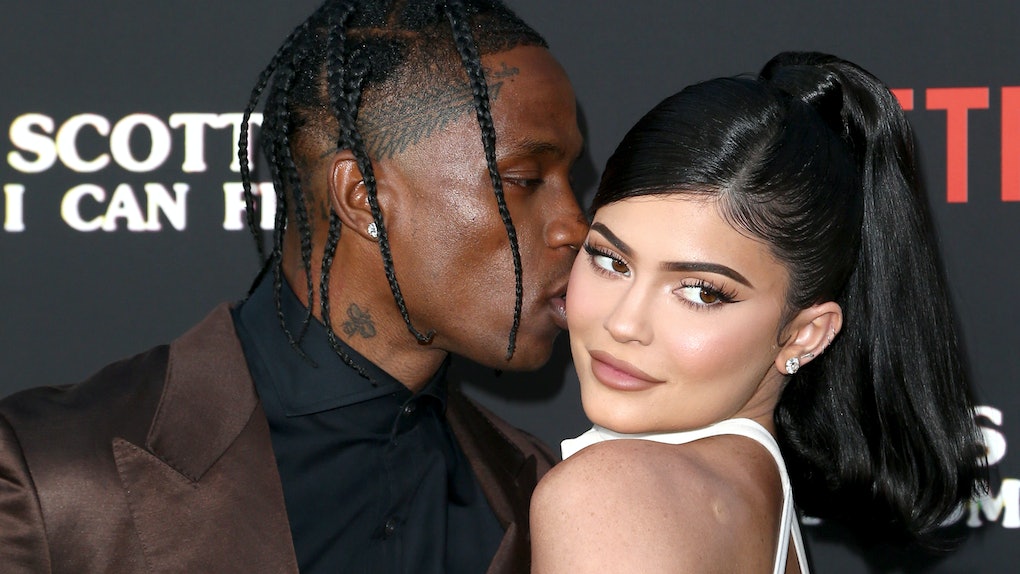 Kylie Jenner & Travis Scott Broke Up, According To Reports

Have you heard the devastating news, y'all? For all you Kylie Jenner and Travis Scott fans, I'd advise you to sit down for this. Kylie Jenner and Travis Scott broke up, according to a TMZ report. Elite Daily reached out to Jenner's team about the report, but did not hear back by the time of publication. Honestly, it is hard to imagine this couple being no more, considering the amount of love and adoration they publicly show each other. But you never know what goes on behind closed doors.

According to TMZ, Kylie Jenner and Travis Scott are both single again and they reportedly have been for quite some time. The outlet’s sources report the former couple hasn't been seen in public together since the premiere of Travis Scott’s Netflix Documentary Look Mom I Can Fly, which premiered Aug. 27.

That claim feels odd considering the two looked awfully close that evening. Remember how Scott pulled Jenner into a sweet embrace before posing for a few scorching hot photos. There was one where he even grabbed her butt. They also took photos with their daughter, Stormi. Honestly, they looked like such a tight unit.

However, TMZ says Scott and Jenner have been trying to make the relationship work for a while but, several weeks ago, they reportedly decided to step away, which is apparently why Jenner has not posted Scott on her feed since Sept. 10. On the other hand, she's a billionaire with an empire to run, so maybe she doesn't want to post him every day?

Regardless, TMZ has another claim that seems like possible evidence of a split — though, I still have my doubts. Over the weekend, Jenner's pals Justin Bieber and Hailey Baldwin held their official marriage ceremony in South Carolina. Jenner was in attendance, but not with Scott. She went with Stormi and was said to have danced with longtime friend Jaden Smith. Going stag to a wedding usually means you are single, but there's always a chance that her busy boyfriend just couldn't make it.

I find this all very interesting because Jenner was just combating split rumors a few weeks ago. On Sept. 18, fans noticed Jenner's latest mirror selfie, captioned, "ain’t a game, boy," was missing a framed photo of herself and Scott, which fans had seen before in an Aug. 4 selfie taken in the same spot.

Fans started to leave comments like, "the frame in the background of her and Travis is gone and the caption is sus!!!!" but Jenner put those rumors to rest. She posted an Instagram story featuring a sweet family photo on Sept. 18.

This also comes after Jenner and Scott were featured in the September 2019 issue of Playboy, in which they and said their sex life was better than yours. OK, that's not verbatim, but the couple told the magazine having a child hasn't put a damper on things in the sack.

"A lot of people claim that having a baby can hurt your sex life, but I feel like that's the opposite of our experience," Scott said.

"Yeah, I feel like we've definitely proven that rumor to be wrong," Jenner replied.

It really felt like Jenner and Scott had been growing closer together this whole time, but maybe I was wrong. Maybe it was all a facade. Only time (and probably Instagram) will tell. Until then, hoping the best for Scott, Jenner, and baby Stormi.