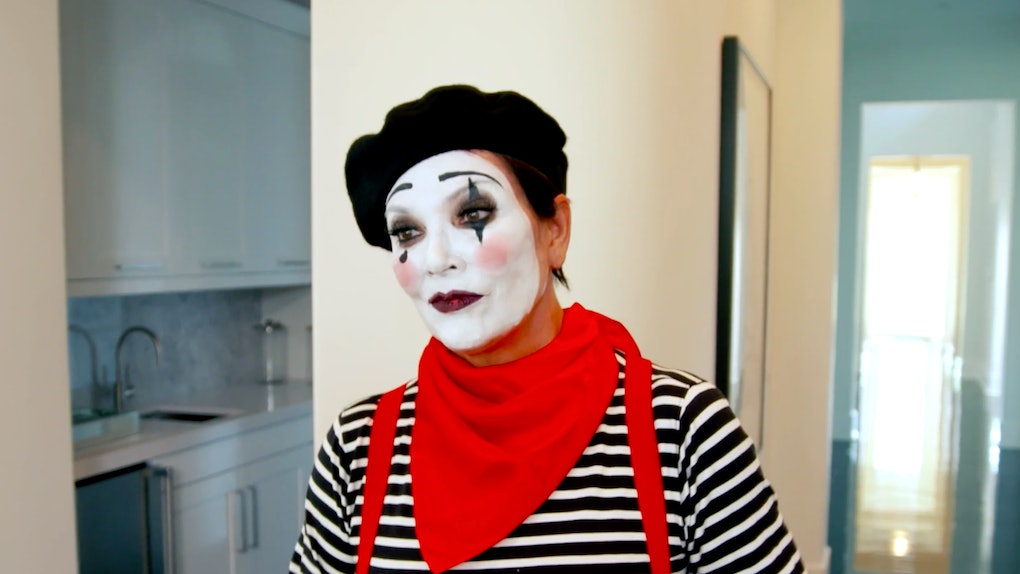 Kris Jenner can do no wrong. Whether you love to hate or hate to love her, you've got to admit, this woman is one tough cookie. Even if you disagree with her decision to catapult her children into megastardom, there's no denying she's done a pretty good job with it. She's THE boss. Maybe that's why this video of Kris Jenner dressed up as a mime is so freaking hilarious to me.

As we all know, Jenner's kids love to play jokes on her. We've seen her daughters smash cakes on her head, throw flour in her hair, and play prank after prank on their momager. Sure, her kids pick on her, but it also kind of looks like Jenner loves it. And hey, if she can be this energetic, spontaneous, and playful after everything she's seen in her lifetime, then good for freaking her.

In an exclusive clip from Keeping Up With The Kardashians, Jenner dresses up as mime and follows Khloé around her home. To be honest, her costume is amazing. She totally transforms into a legit mime, and even nails some of the traditional mime poses.

Not bad, right? I've weirdly watched the part where she sticks a phone charger in her mouth, like, three times. Khloé described her mom's attitude perfectly when she said,

I am so happy to see my mom as this light, fun Kris Jenner. This is the Kris Jenner I know. So, the next time things get crazy, pull out that face paint and your mime costume. You're good to go.

Considering I follow the entire Kardashian/Jenner family on all of their social media accounts, I knew about Jenner's epic costume back around Halloween. You guys KNOW Kris Jenner loves a good, themed party and never does anything half-assed.

When it comes to managing all of her children's lives, Jenner says it's not something she takes lightly. Especially now that Khloé is having her first child, Jenner has been doing a lot of reflecting. She spoke with Entertainment Tonight about the kind of parenting advice she's passing on. Jenner explained,

I think they just see by example. All of us are together, so it's not like I have to sit each one down and say, 'OK, when you grow up, or when you have a baby ...' We're so involved with each other's lives that I think they see how we all manage and micromanage our lives.

I taught my kids from day one, family is everything – so, that comes first. They've always had their priorities together and I'm proud of that. Their kids always come first, and I think that's important.

As much as this woman loves being a mom and a manager, she says her favorite role is "glam-ma" to all of her grandkids.

It's everything – that's my best [job], that's my favorite. It's the best. The kids bring so much joy, and it makes everything worth it. And they see their moms, and me, and their dads, and family, you know, always together – always working together, playing together. When we're off and we have downtime, we're together. And they see that, and they feel that, so it's really special. They bounce around to all their aunties, and to my house, and it's good.

She added, "When your babies have babies, it's magic. It really is."