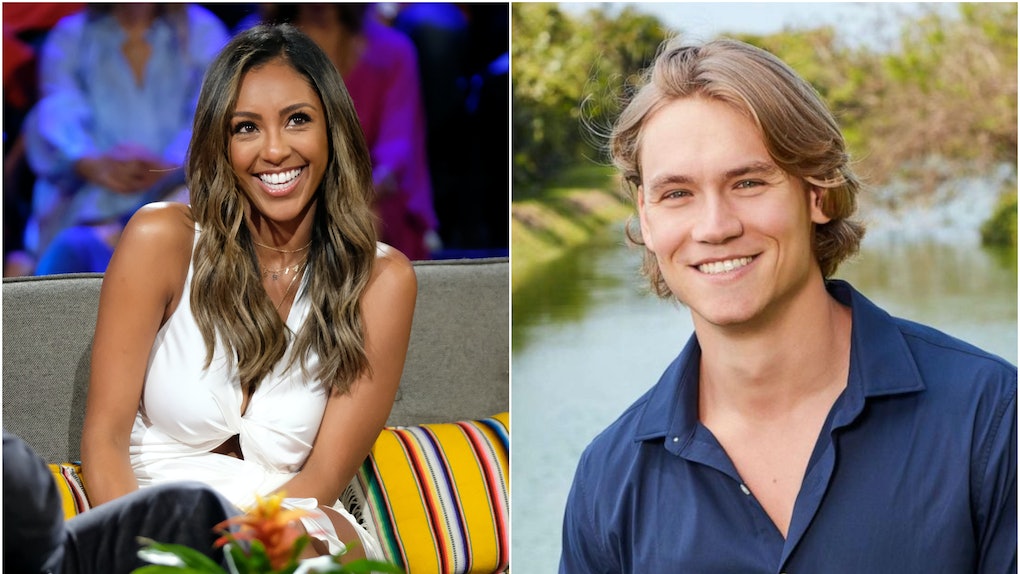 Bachelor in Paradise can lead to some unlikely relationships, and the romantic pairing of John Paul Jones and Tayshia Adams was quite the surprise on Season 6. After a slightly tumultuous romance, Tayshia called things off before they progressed to Paradise's overnight stage. Now, this update about Tayshia and John Paul Jones' relationship after Bachelor in Paradise is fittingly a whirlwind.

24-year-old Bachelorette favorite John Paul Jones left his beloved chicken nuggets behind on the beach when he developed feelings for Tayshia. Despite a strong spark between them pretty early on, Tayshia encouraged JPJ to explore other connections while she grew closer with contestant Derek Peth. After dealing with his own love triangle with Haley Ferguson and Tahzjuan Hawkins, John Paul Jones clashed with Derek, claiming the older man had bragged about his fame in unflattering ways. JPJ refused to talk things through with Derek, who exited the show after Tayshia told him she couldn't see a relationship forming between them.

As the season progressed, John Paul Jones fell for Tayshia even more, telling cameras, "Every moment builds toward that potential engagement. There are still deeper conversations she and I have to have, but I'm falling in love with Tayshia."

Tayshia wasn't so sure, admitting to a lovesick JPJ, "I want to get there but I'm not there yet."

Although she was tearfully apologetic to John Paul Jones, Tayshia still said goodbye to him on the beach. Ahead of the Sept. 17 Bachelor in Paradise reunion, she told Entertainment Tonight, "Honestly, I felt like I'd made a really big mistake letting someone go that genuinely cared about me, but also I knew that my heart wasn't there, so I didn't wanna lead him on or anything."

During the reunion episode, Tayshia spent her time in the hot seat opening up about the breakup's aftermath. "We had a whirlwind romance and I think it took me by surprise," she said. "I'm the last person to throw around engagement and marriage, and the right thing to do was to let him go ... [Back home,] all I could think about was John Paul Jones."

Katie admitted to host Chris Harrison that she made a mistake in saying goodbye, and then it was revealed she ultimately decided to go after him, flying to his home state of Maryland sometime between the ending of Paradise and the reunion show. In footage of the visit, Tayshia admitted she couldn't stop thinking about him, and wondered how he was feeling about her. JPJ told her he wouldn't have used the "L word" if he didn't mean it. She then confessed she wanted to explore things with him, and in response, he sweetly asked her to be his girlfriend.

After the happy couple revealed they were taking things at their own pace during the Paradise reunion, JPJ got down on one knee... to recite a romantic Shakespearean monologue to his bae. While fans may have expected a proposal in that moment, it wouldn't have been a John Paul Jones move without that special surprise.

Fans will have to wait and see how Tayshia and John Paul Jones' relationship holds up in the coming weeks.

More like this
Peter Weber’s Quote About How ‘Bachelor’ Producers Get Contestants To Kiss Is Wild
By Abby Monteil
What Would An LGBTQ+ 'Bachelor' Season Look Like?
By Abby Monteil
A Petition To Cancel Colton Underwood's Reported Netflix Show Is Gaining Support
By Abby Monteil
Stay up to date