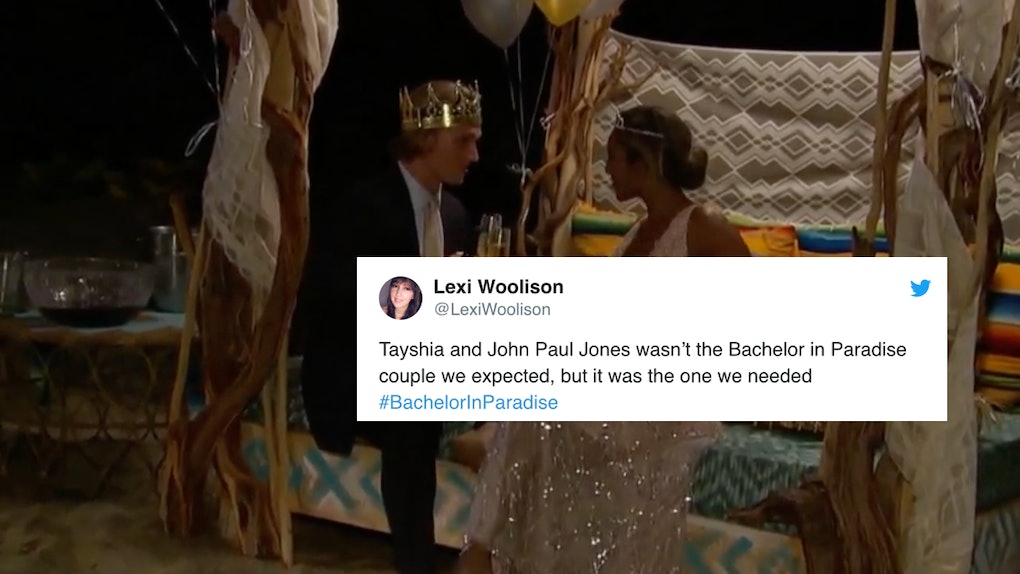 Sometimes Bachelor in Paradise can feel a lot like high school. After all, both situations bring a bunch of different people together in close quarters, making both situations perfectly primed for gossip, drama, and crushes. It was only a matter of time before the Bachelor franchise gave its contestants a taste of a real high school experience, and that's what happened in the Sept. 9 episode, when John Paul Jones decided to invite Tayshia Adams to "Paradise Prom." These tweets about John Paul Jones and Tayshia's Bachelor in Paradise prom are so sweet.

JPJ and Tayshia have had their fair share of ups and downs this season, especially thanks to JPJ's drama with the third point of their former love triangle, Derek Peth. However, after Tayshia broke up with Derek, JPJ recommitted himself to making his devotion to Tayshia very clear. So, after Tayshia told him she never went to her real high school prom, he decided to take matters into his own hands and give her a prom in Mexico.

JPJ went all out to give Tayshia the full prom experience. They both dressed up in formal wear, and JPJ "picked her up" for the date. He took her to a secluded spot set up with balloons spelling out the word "prom," a punch bowl, and a camera for a makeshift photo booth. In short, it was everything you could want from a school dance, plus a Mexican resort and the ability to legally drink alcohol.

It was all a super romantic gesture from JPJ, and Bachelor in Paradise fans got pretty excited about it on Twitter.

Prom isn't complete without a prom king and queen, so of course Paradise Prom needed its own royalty. JPJ gave Tayshia a plastic crown and told her she was the most beautiful person in Paradise. He said, "“I therefore crown you the queen of Paradise Prom!” JPJ also crowned himself the "king of Paradise" and had a pretty good time shouting that all over the beach.

JPJ and Tayshia were then serenaded by a saxophone player, and they invited the rest of Paradise to join them on the dance floor. But of course, not everybody got to go to Paradise Prom with someone special. Wells Adams took a break from his bartending duties to step onto the dance floor. Since he didn't have a date, he just danced alone. (His fiancée Sarah Hyland probably got a big laugh out of this, TBH.)

The Paradise Prom may have helped to strengthen JPJ and Tayshia's relationship, at least from his side of things. "I came into his open to love. I didn’t expect it, but love is knocking on my door," he said after the big night. "I’m definitely falling in love with Tayshia. I’ve found something great and something real, something that could last a lifetime.”

Tayshia seemed pretty smitten by the whole prom experience, but only time will tell if it was enough for JPJ to totally win her heart.