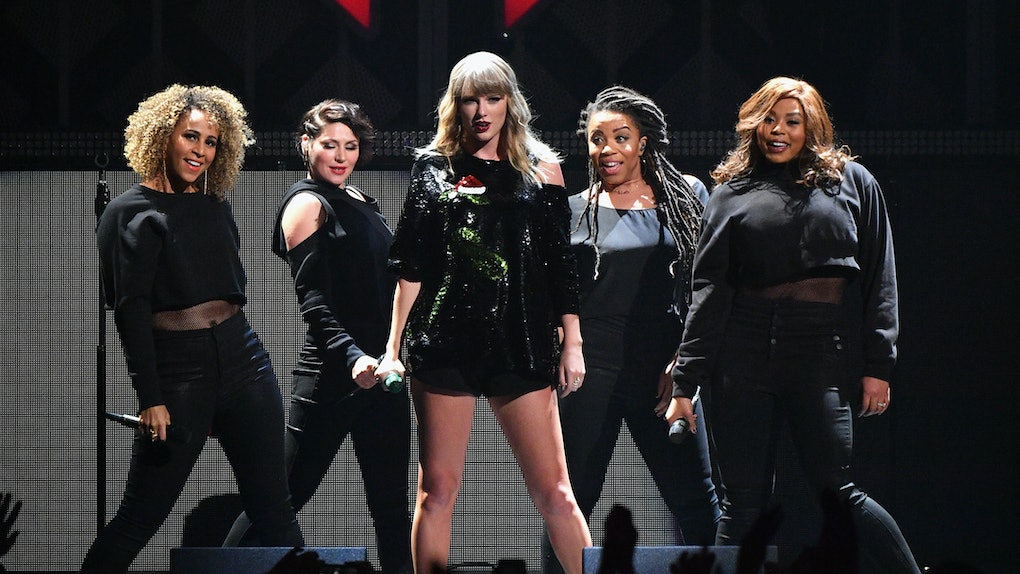 Taylor Swift's schtick is she loves writing songs about her loves, both present and past. So, as soon as Reputation dropped, everyone sort of decided that a bunch of the tracks were about boyfriend Joe Alwyn. And when during the 2018 iHeartRadio Music Awards, Taylor Swift decided to drop the "Delicate" music video, everyone was instantly on the hunt for clues. And let me tell you, you'll have to hunt hard, because these Joe Alwyn references in Taylor Swift's "Delicate" music video are so subtle.

Fans who have become accustomed to scanning the web for Swift and her latest squeeze have been very disappointed. Swift and Alwyn have been reportedly dating for about two years now and yet we've barely seen them together. It means that fans have been extra on top of searching out hints and clues about Alwyn in Swift's work — finding references in her music videos, and theorizing that entire songs are about him. There's also the whole thing that Swift apparently told fans at listening parties for Reputation that the whole album was about Alwyn — meaning that fans had plenty to work with.

But if you were looking for references to Alwyn in her most recent video, you might have been disappointed. It was a total throwback to old happy T.Swift, and she spends most of the video being silly and dancing around as she heads over to the east side — but one thing it lacked was obvious references to Alwyn.

Over course I combed the video over and over (and over) to be sure I didn't miss any Alwyn references.

I almost did! The video seems to be pretty subtle, but there it was. Towards the end of the video, Taylor is dancing in an alley as the rain pours down, doing splits on the top of a car with no f*cks given. And behind her is a store front sign that reads "Joe's Deli." Joe's Deli. There it is. A sweet and subtle nod to Alwyn.

It was OK that it was subtle. The "Delicate" video really seemed to be about Swift herself. Not her man, not any man. Just about her own journey towards happiness. It was kind of awesome and inspiring. The lack of focus on Alwyn really allowed fans to remember the old Taylor and also connect with the new one in a special way.

Twitter picked up on that right away and loved it!

Usually Swift is all about showing off her arm candy, but this might mark a big change. After her highly-publicized relationship with actor Tom Hiddleston (we all remember that wet "I heart T.S." tank), Swift kind dropped off the romance map. Fans were a little thirsty for who Swift might be snuggling up with. Then out of nowhere The Sun reported in May 2017 that Swift and Alwyn had been secretly dating for months. Apparently Swift had been spending lots of time in London disguised in a wig in order to keep their romance under wraps.

According to Glamour, Swift might be bringing Alwyn along for her Reputation tour, which kicks off on Tuesday, May 8. The pop sensation is apparently tired of not living her life and doesn't want the public eye to ruin her love life. A source told Glamour,

[Taylor’s] gonna be on tour soon and Joe will be there and she realized there’s no point in not living her life ... All her friends know about their relationship anyway. She feels confident in their relationship and Joe really loves her. She really thinks he might be the one.

Truthfully, if "Delicate" is any indication of how Swift feels about Alwyn, then I'd say they are in it for the long haul. It's kind of interesting to hear Swift being a little nervous. Check out these lines: "Is it cool that I said all that?" "Is it chill that you're in my head?"

Tay, you are pretty much the most famous pop star in the world, it's totally cool and totally chill. Go forth and prosper. Stop worrying, girl.

Let's just hope it doesn't get ruined by adoring fans (who are loving all the Swift/Alwyn combo).

Reputation on its own has a lot of sweet sentiments for Alwyn and who knows, maybe Swift will never have to write a song about another guy every again... unless of course it's Kanye West or another dude who gets in her way. That, I'd be OK with.