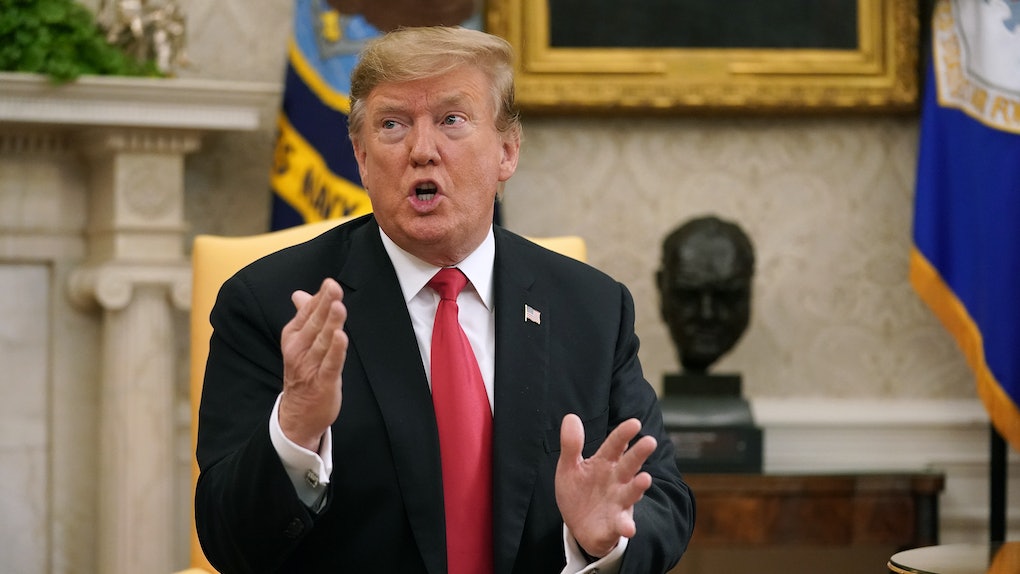 I know what you're thinking, folks, English is hard, ain't it? Even the best and brightest goof up once in a while and forget to cross their T's, dot their I's, or need to sing Gwen Stefani's "Hollaback Girl" each time they have to spell "banana." Even the president isn't immune from a flub, and people notice. Honestly, these tweets about Donald Trump asking for the Mueller reports "oranges" are just a lot. Clearly, everyone's a little confused right now.

During an April 2 meeting with NATO Secretary General Jens Stoltenberg in the Oval Office where they spoke about defense budgets, immigration, and of course Special Counsel Robert Mueller's investigation, Trump said he thinks reporters should look into the "oranges" of Mueller's report, according to The Guardian. One could only assume he meant to say "origins," but listening to the audio, it sure doesn't sound like it. Elite Daily reached out to the White House for comment on the possible "oranges" mixup, but didn't immediately hear back. Here's what he said on Tuesday,

Here is the video of Trump delivering the lines about the Mueller report. Does it sound like "oranges" to you?

With a gaffe as big as the leader of the free world appearing to sub out "origins" for "oranges" numerous times, Twitter had a lot to say.

This "oranges" mixup comes after a bit of flip flop from Trump on the Mueller report. On Sunday, March 24, Attorney General William Barr released a summary of Mueller's full report on his investigation into possible collusion with Russia during the 2016 election. Barr wrote in his summary that Mueller "did not find that the Trump campaign or anyone associated with it conspired or coordinated with Russia in its efforts to influence the 2016 U.S. presidential election." The details on the obstruction of justice part of Mueller's report draw less of a hard line. While the report explicitly said that the investigation did not exonerate the president on the issue, it ultimately left the question up to the Department of Justice (DOJ) to make a decision, and Barr decided the evidence they found "is not sufficient" enough to decide whether Trump obstructed justice. Elite Daily reached out to the White House at the time for comment on the summarized report, but did not hear back.

Following the summary that some found underwhelming, more than a few people, including members of Congress such as Rep. Jerry Nadler (D-New York), the chairman of the House Judiciary Committee, asked that the full report be released. The DOJ did not respond to Elite Daily's request for comment on whether the department plans to release the full Mueller report to Congress and the public.

Even before Barr's letter, before the public knew any information about the contents of Mueller's report, Trump told reporters on March 20, “Let it come out. Let people see it — that’s up to the attorney general,” according to MSNBC. Adding that he "didn't mind" the report being made public, according to Rolling Stone.

Trump seems to have since changed his tune this past week, calling efforts to make the full report public a "waste of time" during his Tuesday meeting with Stoltenberg, according to The Hill. The White House did not immediately respond to Elite Daily's request for comment on the apparent shift in Trump's attitude toward the release of special counsel's full report. But it looks like Trump won't have a choice but to get behind it, because on Wednesday, April 3, the House Judiciary Committee greenlit a subpoena for Mueller's full report, and it's now up to Nadler to actually issue it in an effort to obtain the full report. Elite Daily reached out to the White House for comment on news of the subpoena, but did not immediately hear back.

With all the fuss over the report, there's really only one thing left to say: orange you glad you might have all the Mueller tea soon?