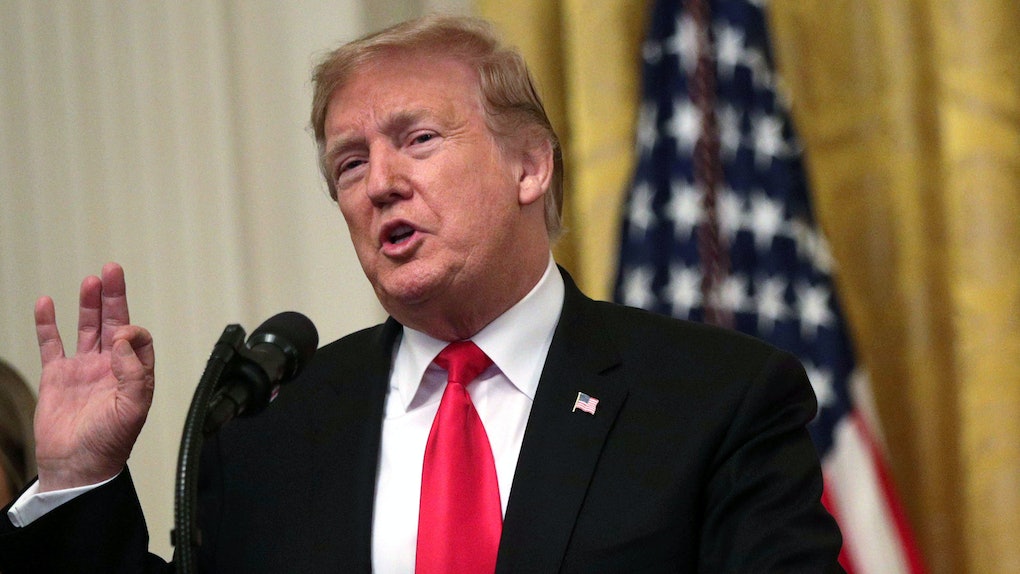 Elite Daily reached out to the DOJ for comment on whether the letter constitutes "complete exoneration" of President Trump, but did not hear back at the time of publication.

Now, it's not unusual for Trump to take to Twitter at times like this (or any time, really), but it is interesting that one of the claims in his tweet seems to directly contradict a line from Barr's letter that was released on Sunday. Trump tweeted:

While Barr's summary of Mueller's report does state, "The investigation did not establish that members of the Trump Campaign conspired or coordinated with the Russian government in its election interference activities," it also has information regarding possible obstruction of justice.

The Special Counsel states that 'while this report does not conclude that the President committed a crime, it also does not exonerate him.'

It appears that Trump and the White House believe that Attorney General Barr and Deputy Attorney General Rosenstein's decision to take no further action is the exoneration they are looking for. Barr's summary of the Mueller report has left much to be desired for many who have been watching along during the almost two-year-long investigation.

Trump's tweet that appears to be at odds with a direct line from Barr's summary of the Mueller report isn't the only thing that has left people scratching their heads. Many people, including members of Congress like Rep. Jerry Nadler (D-New York), the chairman of the House Judiciary Committee, are calling for the complete release of the Mueller report, rather than only the summarized letter from Attorney General Barr. The DOJ did not respond to Elite Daily's inquiry regarding whether the department has plans to release the full Mueller report to Congress and the public.

While Sunday's letter didn't reveal any new indictment or collusion with Russia, the 22-month-long investigation did result in the indictment of "34 people and entities," according to USA Today. Charges were brought against former Trump associates including Paul Manafort, Michael Flynn, Michael Cohen, and Roger Stone. Manafort will serve a 73-month sentence for pleading guilty on charges of conspiracy against the United States. Representatives for Manafort did not immediately return Elite Daily's request for comment on the sentencing. Flynn accepted a plea deal to cooperate with the special counsel is awaiting sentencing for pleading guilty to lying to federal investigators. Cohen will serve a 3 year sentence for pleading guilty to financial crimes and lying to Congress. Elite Daily reached out to Cohen's representation for comment on his sentencing at the time, but did not hear back at the time of publication. Stone was indicted for allegedly lying to the House Intelligence Committee about his interactions with "Organization 1, which appears to be WikiLeaks. Stone denies the charges and "look[s] forward to being fully and completely vindicated."

With Barr's summary of Mueller's completed report — which was handed to the attorney general on Friday, March 22 — resulting in President Trump claiming "total exoneration," it will be interesting to see what else is on the president's Twitter feed as the fight for the full release of the Mueller report ensues.

More like this
These Tweets About The Bidens' Photo With The Carters Ask A LOT Of Questions
By Rhyma Castillo
Daily's Poptails Frozen Alcoholic Pops Are Wine-Based, Fruity Treats
By Cianna Garrison
The Woman Behind @NorisBlackBook Is Serving Hilarious Kardashian Commentary On IG
By Lara Walsh
Stay up to date