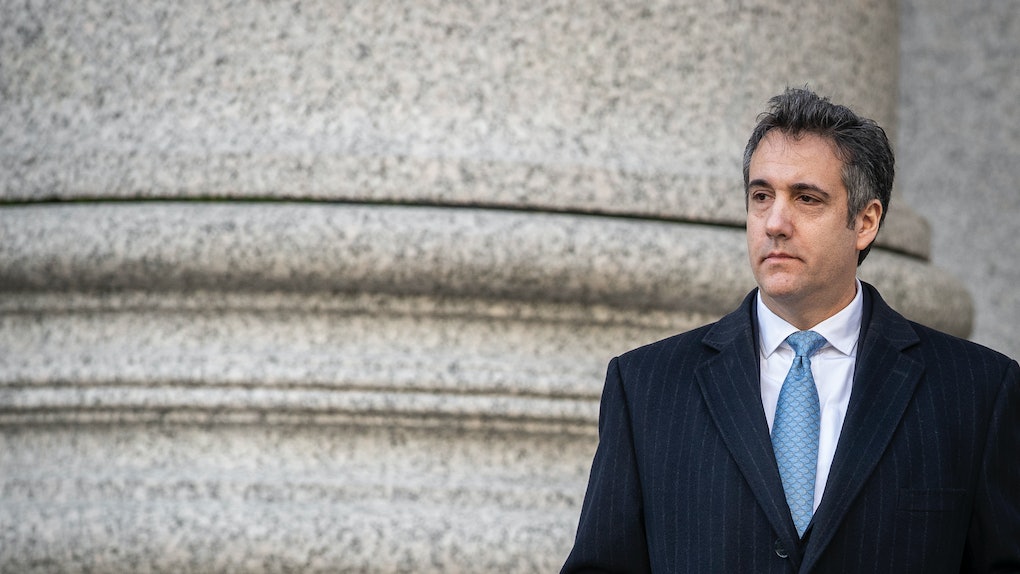 On Wednesday, Dec. 12, Donald Trump's former lawyer, Michael Cohen, faced a federal judge to receive his sentencing about a multitude of crimes he pleaded guilty to over the past year. In case you've been living under a rock since 2017, Cohen admitted to some serious charges, such as lying to Congress about a former Trump Tower real estate deal in Moscow, Russia. The drama surrounding Cohen has been unfolding for months, but it's official: Michael Cohen was sentenced to three years in prison for his guilty pleas. I can't believe it, but it looks like this chapter may have officially come to a close.

According to updates from CNN, Michael Cohen will receive 36 months in prison, aka three years, for his guilty pleas for financial crimes, with the possibility of knocking down that sentence if he cooperates with prosecutors. As for pleading guilty to lying to Congress, Cohen was sentenced to two months in prison, which he will serve concurrently with his previous sentence. Cohen has been ordered to surrender himself on March 6, when his sentence will begin. Elite Daily reached out to representatives for Cohen regarding the sentence and whether he will continue to cooperate in the hopes of further reducing his sentence.

Safe to say, this has been quite the day for Michael Cohen. Not only is he facing federal court, but he was sentenced for two plea deals. In August, he pleaded guilty to eight counts of financial fraud, including illegal campaign violations. And then in November, he pleaded guilty to lying to Congress in a surprise filing brought by Robert Mueller's investigation into possible collusion between the 2016 Donald Trump presidential campaign and Russia.

Following Cohen's sentencing, Cohen's spokesperson, Lanny Davis, shared a statement with Elite Daily about Cohen's cooperation in pleading guilty, saying that Cohen "continues to tell the truth" about President Donald Trump's alleged misconduct, and that Cohen would continue to cooperate with investigators. He says,

Michael has owned up to his mistakes and fully cooperated with Special Counsel Mueller in his investigation over possible Trump campaign collusion with Russian meddling in the 2016 election. While Mr. Mueller gave Michael significant credit for cooperation on the “core” issues, it is unfortunate that SDNY prosecutors did not do the same.

Before the sentencing, Cohen's lawyers asked for no jail time, claiming that their clients' actions were due to his "fierce loyalty" to Trump. In addition, Special Counsel Robert Mueller's team told the court that Cohen "told the truth" during their conversations. Plus, Cohen and his team regularly pointed fingers at Trump, claiming he only did what he did in order to "cover up his dirty deeds." Elite Daily reached out to the White House for comment, but did not immediately hear back.

Despite the combination of Mueller's words and Cohen's cooperation, the judge claimed that Cohen "pled guilty to a veritable smorgasbord of fraudulent conduct," and therefore sentenced him to prison time.

According to tweets from CNN reporter Erica Orden, Cohen addressed the court and took full responsibility for his actions, and promised he has learned from them. He said,

I take full responsibility for each act that I pled guilty to: the personal ones to me and those involving the President of the United States of America. This may seem hard to believe but today is one of the most meaningful days of my life. I have been living in a personal and mental incarceration ever since the day that I accepted the offer to work for a real estate mogul whose business acumen that I deeply admired. I am truly sorry and I promise I will be better.

Leading up to this fated day, all of us have been wondering exactly what Cohen's future would be. Of course, Trump's former attorney has been making headlines for months, but on Dec. 7, federal prosecutors announced their sentencing recommendation for Cohen, and it didn't look pretty. According to the filing, prosecutors recommended that Cohen should receive a "substantial" prison time of four years despite his numerous guilty pleas. Well, it looks like these federal prosecutors haven't been moved by Cohen's recent truthfulness.

"He was motivated to [commit crimes] by personal greed, and repeatedly used his power and influence for deceptive ends,” the sentencing memo read. Elite Daily reached out to to Cohen's representatives for comment about the filing at the time, but did not hear back.

To commemorate the attorney's drama-filled year, let's look back on what exactly prompted this whole ordeal. To start, on Aug. 21, Cohen admitted to paying Stormy Daniels and Karen McDougal, two women who claimed to have had affairs with President Trump, "at the direction of the candidate," which implicated Trump's involvement. Despite Cohen admitting to the payment, Trump has consistently denied all of these affair allegations since they surfaced.

Then, on Nov. 29, Cohen pleaded guilty yet again when he admitted to lying to Congress about prior real estate negotiations concerning a Trump Tower deal in Moscow, Russia, during the 2016 presidential election. Even though the real estate deal was never finalized, these negotiations were a key topic of interest into Special Counsel Robert Mueller's investigation into finding out whether the Trump campaign colluded with Russian operatives during the election. It looks like things are really coming full circle.

This year has certainly been a wild ride for many of us, but especially for Cohen. Who knows what 2019 has in store for us.