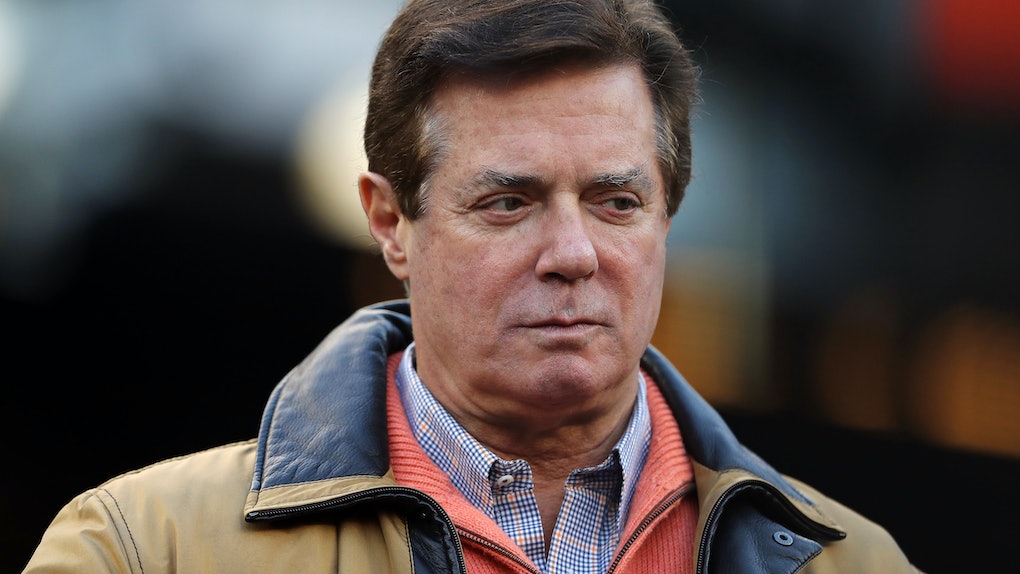 How Many Years Will Paul Manafort Spend In Prison? His Sentencing Added On A Few Years

One leg of FBI Special Counsel Robert Mueller's investigation into possible collusion between Russia and members of the 2016 Trump campaign has come to an official end. On March 13, the president's former campaign chairman Paul Manafort was sentenced for crimes related to unregistered foreign lobbying and witness tampering (which are unrelated to his campaign work), marking an end to a legal battle that has lasted for well over a year. So how many years will Paul Manafort spend in prison, you ask? Overall, it's a few years.

On March 13, Manafort was sentenced to 73 months in prison for his guilty plea on charges of conspiracy against the U.S., which includes money laundering, failure to register as a foreign agent, tax fraud, and witness tampering (which stems from his attempts to sway witness testimony after he was indicted on the other charges in 2017). Thirty of those months will be served concurrently with a previous sentence, for a total of 43 additional months in prison. Representatives for Manafort did not immediately return Elite Daily' request for comment on the sentencing. Previously, Manafort had been in a plea deal that required his full cooperation in exchange for a lighter sentence. However, he reportedly violated that agreement in late 2018 by allegedly lying about topics related to the Russia investigation, which put him at risk for a longer sentence. His representatives did not return Elite Daily's previous requests for comment. On a brighter note (I guess?) he was initially facing a sentence of up to 10 years.

On March 7, he was sentenced to 47 months in prison on charges of financial fraud — a sentence that was far lighter than the 19 to 24 years Mueller had recommended he served. All together, Manafort will spend about seven and a half years in prison, including about nine months of time already served.

Of the half-dozen Trump associates Mueller's investigation has nabbed, Manafort has received the harshest sentence yet. However, there's speculation that he may be pardoned by President Donald Trump, who has publicly said how badly he feels for Manafort. While the president has said he hasn't "discussed it," White House Press Secretary Sarah Sanders suggested on March 11 that Trump hasn't taken the option off of the table, saying he'll make the decision "when he's ready," per CNBC. Elite Daily reached out to the White House for further comment on the possibility of a presidential pardon, but did not immediately hear back.

However, such a move would not protect Manafort from state charges — and New York prosecutors have reportedly already indicted the former chairman on several counts. Just minutes after his March 13 sentencing, prosecutors hit Manafort with 16 counts related to mortgage fraud, conspiracy and falsifying business records, according to CNBC. Elite Daily reached out to representatives for Manafort for comment on the new charges, but did not hear back by the time of publication.

So, though Mueller might be done with Manafort, it looks like there's a lot left in his legal drama. We'll see what happens from here.